Afternoon tea is a great British tradition, and many hotels offer it. It is a light meal eaten in mid-afternoon and consists of tea (or coffee), light sandwiches, cakes, and maybe a scone with some jam and cream.
You would not think that it would be something that children would like to do, but when we were invited to sample afternoon tea at The Cavendish Hotel in London, we jumped at the chance. 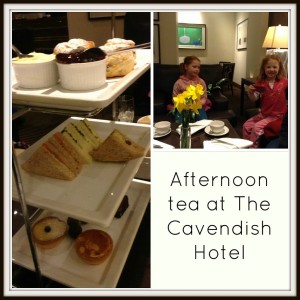 Fresh from our little ladies’ shopping trip (to nearby Hamleys, naturally), we set off to our hosts. The Cavendish Hotel is a beautiful place on Jermyn Street, a short walk from Piccadilly Circus or Green Park. The staff were extremely welcoming, especially of the children (who were aged from four to eight). The children were amazed at the high-end decor and furniture and tried very hard not to spill too much!
Afternoon tea consists of tea or coffee (although you can have a soft drink instead if you prefer), a selection of sandwiches – ours included ham and mustard, cheese and pickle, salmon, and egg – a small cake, and a scone with jam and clotted cream. We had four teas between 2 adults and 4 children, which was just enough to tide us over until dinner time. Extra drinks can be purchased separately.

The food was the excellent quality you would expect from a four-star hotel, and it was brought out very quickly.
What I liked most about our little trip was that the hotel and staff were more than accommodating with our children. They were spoken to directly, and given little activity packs to keep them entertained. Not that they needed it – there wasn’t much waiting time, and the excitement of being in a place where I’d never dare take them previously was enough for them.

We loved our afternoon tea experience at The Cavendish Hotel and would say to anyone who’d like to do it but are worried about having young children in tow with them, please give them a try.

4 thoughts on “Afternoon tea at The Cavendish Hotel, London”