The Beaulieu Estate, set in the beautiful surroundings of the New Forest, was first opened to the public in 1952. Originally it was the Palace House that welcomed visitors, until a small display of veteran cars outgrew the family home and led to the creation of a separate motor museum. Today at Beaulieu Museum there is lots to see – the Palace House and Gardens, the historic site of Beaulieu Abbey along with a museum, and of course the National Motor Museum which houses several motoring themed exhibitions.
We visited on a hot summer Saturday when Beaulieu Museum was also hosting a Motorcycle Ride-In, where 1300 motorcycles parked up in the grounds to display their bikes and perform some stunt shows. This meant that it was pretty busy, although with most of the visitors being adults we found that the children’s areas remained fairly quiet.
We still headed first for the Mini Cars, knowing that this would definitely be something that my son would enjoy. We were right; he loved the chance to drive his own little car around a mini road. 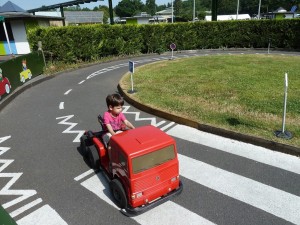 Right next door was the playground where we also spent a lot of time – there were plenty of ride-on cars for little ones and some really imaginative play equipment – some converted farm equipment and a vintage bus complete with slide. There was another pretend road which the children could drive the ride-ons around, obeying road signs and stopping at the mechanics to top up with petrol. 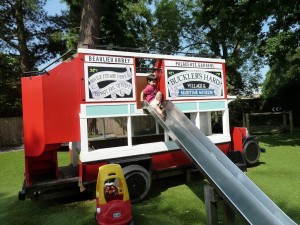 There is a little monorail that runs around the park, with a stop at the entrance and at the far end. We were near to the far end station, so we boarded the monorail here for a circular tour around the park. It was busy, and although there was no queue where we were, not many people were disembarking so we had to squeeze in. It was a really good way to see the whole park, including a brief trip inside the motor museum itself. We got off where we started, just outside the ruins of the old Beaulieu Abbey which we visited next.
Beaulieu Abbey was founded in 1204. It was huge, and a fair amount still remains today. You can walk around the cloisters, and the Refectory is now Beaulieu Parish Church. There is an interesting museum about the lives of the monks, and some beautiful embroidered wall hangings to see. The layout of the Abbey has been mapped out on the ground, and you get a good sense of the scale of the Abbey from the remaining foundations.
Then we had a look around Palace House, which is still the family home of the Montagu family. It is lovely, with some impressive rooms and historic paintings. The house is also surrounded by some beautiful gardens. You can’t picnic inside the gardens, but we found a nice shady spot just to one side with picnic benches to eat our sandwiches.
Then it was time to walk back through the park to the Motor Museum.  We started with the Bond in Motion exhibition where you can see 50 iconic Bond vehicles on display, including from the latest release Skyfall. I’ve not seen all the films and I don’t know much about cars, but it was a really well presented exhibition with film clips of the cars in action which helped to put them into context. The motor vehicle collection in the museum has more than 250 cars on show and there is also recreated Garage and shop fronts which were interesting to see. My favourite exhibit wasn’t actually a car at all but a campervan, all fitted out ready for a trip!
Inside Beaulieu Museum there is a nice little ride called “Wheels” where you can sit in a moving pod for a journey through motoring history. Both the children really enjoyed this and it was a good way for them to learn a little bit about the different types of car that they saw in the museum.
Perhaps more for the adults, there is also a small collection of famous cars from TV and film, including Mr Bean’s car and the flying Ford Anglia from Harry Potter and the Chamber of Secrets, as well as a large exhibition of customised vehicles created by the presenters of Top Gear.
We returned to the playground for an ice cream before heading home after a lovely day out at Beaulieu.  I would say that perhaps Beaulieu is slightly more suitable for older children than toddlers – although there is plenty for younger children to do, older children will probably appreciate it more and make it well worth the ticket price. If you are visiting with young children I’d recommend trying to visit on a quiet day so that you can make full use of the playground and monorail, which ours certainly enjoyed the most.
For more information, you can visit their website at http://www.beaulieu.co.uk/
This is a guest post by Jennifer and her family. Jennifer is a freelance writer and blogs at www.jenniferslittleworld.com.
Disclaimer – the reviewers were given complimentary entry in order to do this review. All opinion is that of the reviewer.