Thank you to the team at Brick Live for inviting us along to day two of this hugely popular four-day event at the NEC in Birmingham. To learn more about Brick Live, please visit their website at http://bricklive.co.uk/ 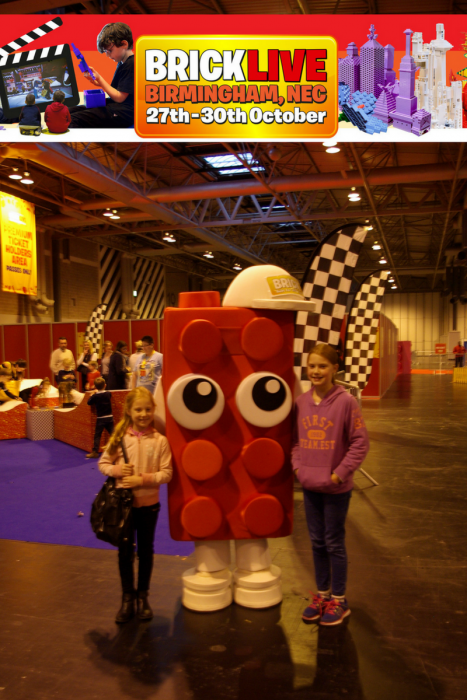 On day two of Brick Live, we made the trek down to the NEC in Birmingham – aside from the blocked M1 and diversion which added a whole extra hour to our journey, the NEC is easy to find and well signposted. Once in the vicinity, the parking area for Brick Live was clearly marked. Parking is £12 for one car for all day, and you need to show your receipt on the way out.

We had a little walk over to halls 18 and 19, and then we straight in to Brick Live with no queues at all. There was a big queuing area and plenty of staff to help. I suspect it had all been needed earlier in the day, but at 12 noon, it was easy peasy. 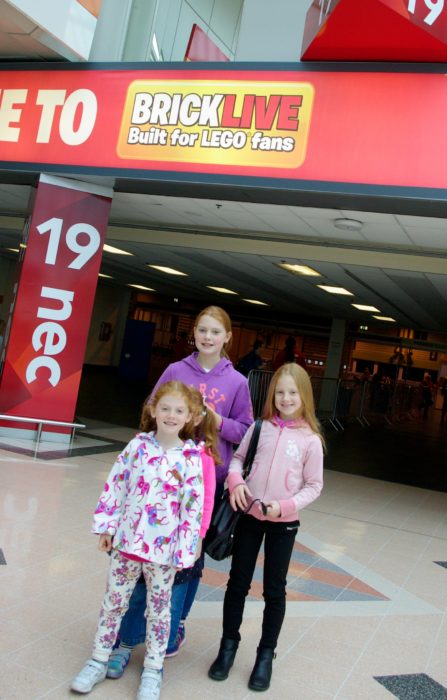 Our first stop was the loos and to find some food. There were several food bars inside the halls -including a Subway, and a hot dog stall. We chose a sandwich bar which had kiddy meals for £4.95, and adult meal deals for £8 – £9. Not the cheapest, but then these places never are. The food was nice though. The tables were full as it was after noon and pretty standard at lunch time. We pulled up a patch of floor. It seemed clean enough and we didn’t get stood on. To save time and money you can bring your own pack up. Others had done this and there was nothing to stop you bringing your own food and drink to the event. 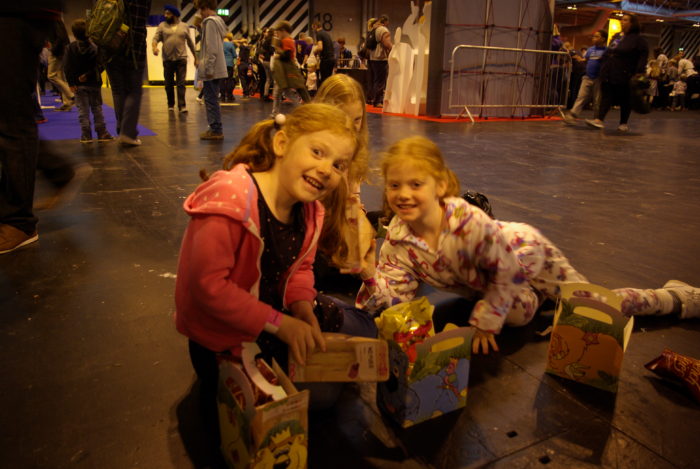 There was lots to do at Brick Live. First of all, we just browsed around to see what was what. We did try and get a house built for Build Britain, but it was very popular, so we had a wander around the trade stalls on Brick Lane and visited the world’s biggest Lego ship, which was so large it made my camera all blurry.

The live stage had a schedule of talks and fun stuff going on. We caught the end of a demonstration of Lego Worlds, the video game, and we sat and watched the Lego Halloween dress up contest – won by a pair of Lego Ninjas.

Back to Build Britain and we found a space where we could construct a house to place on the map. Sadly, a lot of the house type items, such as door frames and green bases had already been used so we had to use our imagination – we give you a cottage on stilts, complete with propeller! We had it placed somewhere (ish) in Yorkshire. The Birmingham area was looking very busy by this time. 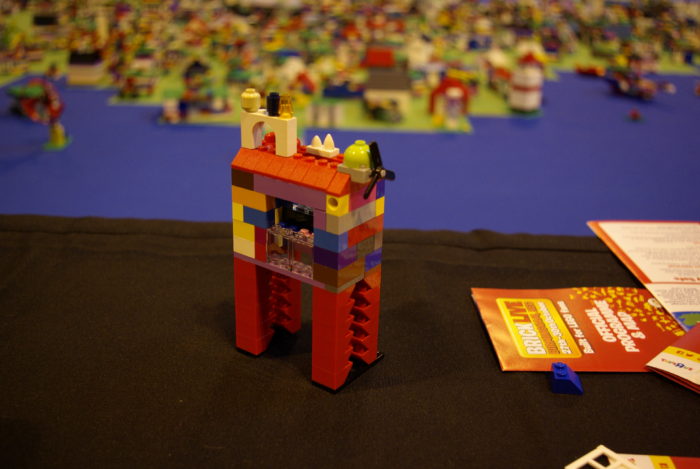 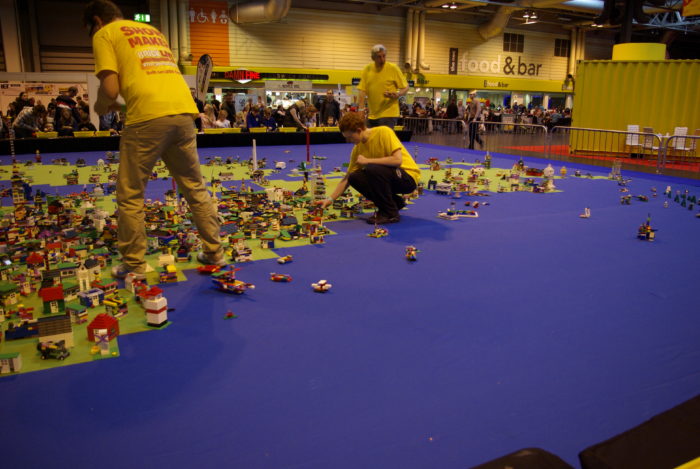 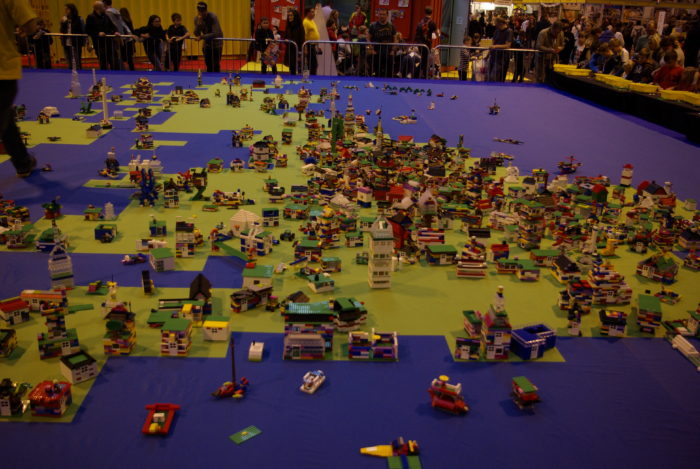 Next up we went to the Pumpkin Patch to build lots of orange bricks which were then used to build a huge pumpkin. The plan was to build it over four days but they finished it in two, so now they’re attempting an even bigger one. With everyone’s help, I’m sure they will do it.

Another wander around the many stalls – and there really is something there for every Lego fan – and off we went to admire the skill of Lego enthusiasts in the Fan Zone. The skill and passion for Lego shines through and there are builds of townscapes, film scenes, and all sorts here to look at. 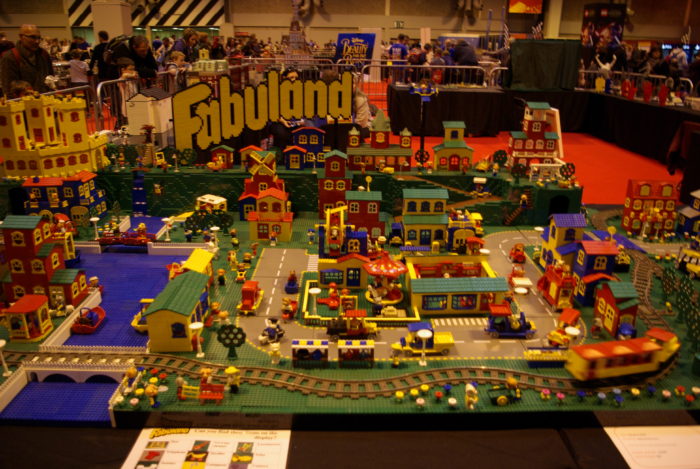 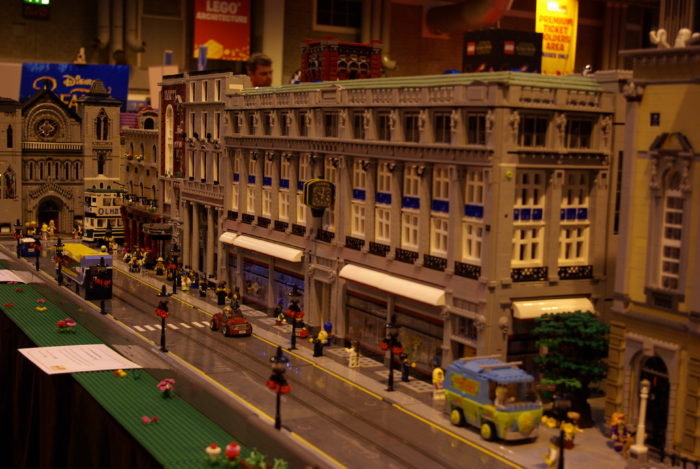 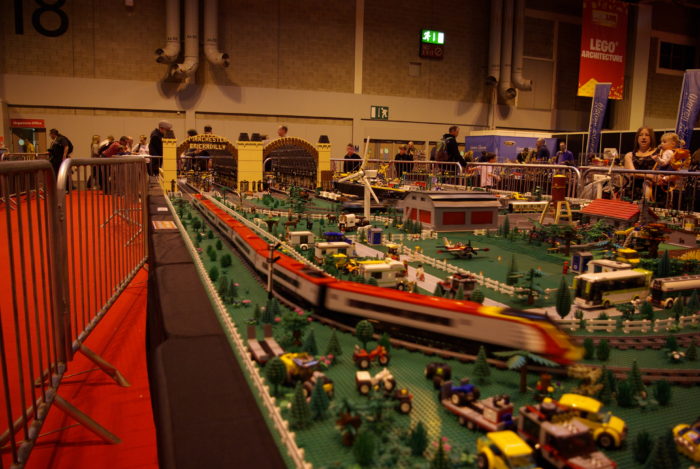 A popular part with us adults, though not so much the younger children, was the BrickLive Gallery, which was basically an art gallery but in Lego. The huge ‘painting’ in the centre was very impressive and there were some awesome pieces. The children didn’t really know who the Lego busts were supposed to be, but us adults enjoyed it anyway.

The graffiti wall got all the girls going, and they all wrote their name in Lego, and added to art that had already been placed there by others. 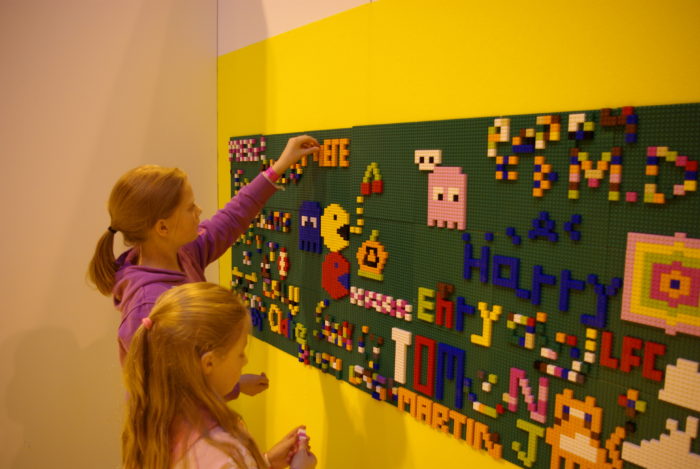 The Dance Zone was Lego friends coming out for a dance to meet us. We watched for a bit, perched on some very cool squashy Lego bricks, but I think mine would rather just get on with playing with Lego, so we didn’t hang around long. The dancers were very good and they had lots of children joining in with them. We just decided on a photo with the Lego Friends display. 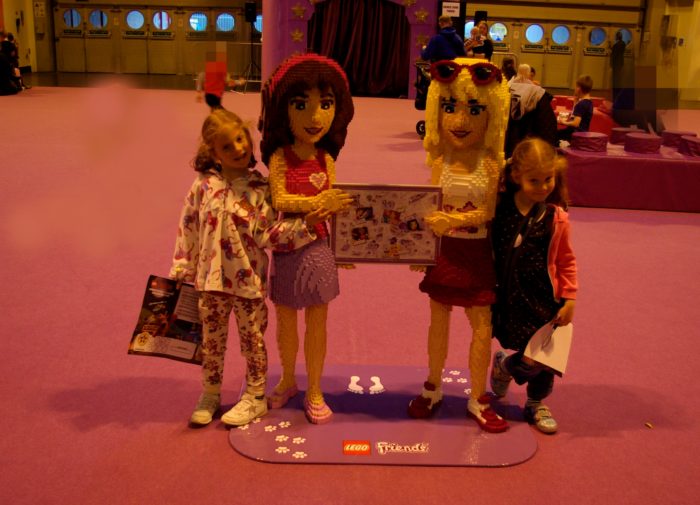 We loved building our own architectural masterpiece in Lego Architecture. Nothing fancy here, just lots of white lego components to use, and everyone else’s creations for inspiration. We made a twisty tower type thing – mainly inspired by what bricks were left at this stage in the day. I think it looks fab among the other pieces.

Throughout the day, there were also characters to meet and lots of photo opportunities.

There isn’t much to pay out for once you are inside. Everything is included in the price, apart from the obvious extras like food and drink, purchases from the trade stalls, and a Lego tombola. The food and drink isn’t cheap – the ice-creams from the stall are at least £3.50 for example, but you can take your own.

The venue is good for this event – the loos are plentiful and clean, and the floor space is tidy and well laid-out. There was loads of people there on the Friday but we didn’t feel squashed in at all. There were queues for some things – such as the Lego video gaming section – so we chose to do other things instead. The staff were great – we had a bag returned to us before we’d even realised it had been left behind. Overall, the atmosphere was fun and friendly.

Later in the day, it got a lot less busy and you could do whatever you wanted, brick supply permitting! Come early if you want more choice but be prepared to wait longer to do it.

Tickets still available for Sunday 30th October – I think you can get them on the door if you decide to come last minute.

Either way, I’m sure Brick Live will be returning in 2017.

Visit time – five hours. The show is open from 10am to 5pm daily, with premium pass holders able to enter from 9am

Disclosure – we were guests of Brick Live. All opinion is our own

One thought on “BRICK LIVE! A Review of our day out to Brick Live, Birmingham NEC”