On 5th August, we headed over to Croxteth Hall in Liverpool to join in the BBC’s biggest ever children’s event – the CBBC Summer Social 2018. It promised to be three days of CBBC fun with celebrity entertainment and lots to do for children of all ages.

The bill included Union J, The Next Step, Junior Frood, the Merseygirls, Shrek the Musical, and tots’ favourite Mr Tumble. There were also chances to meet your favourite stars at meet and greets, and lots of free and paid attractions such as football training sessions with Liverpool FC and Everton. 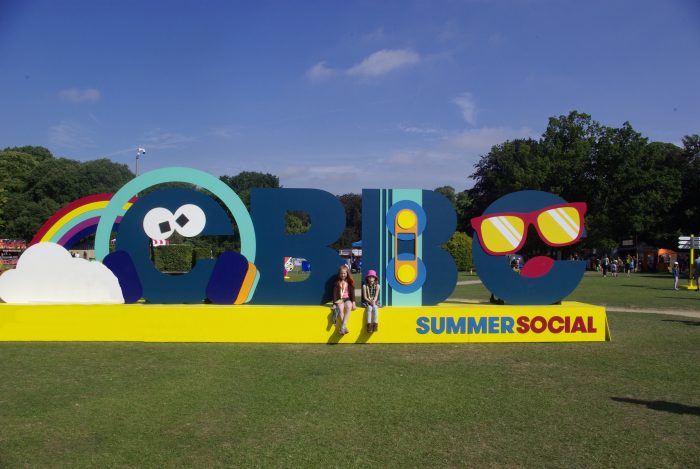 Our day started at 10am. We arrived at the car park just as the festival opened. Car parking was £10 all day per day and was in Croxteth Hall’s ample overflow car park right across from the venue. Loads of staff and signs to help you find your way, and across the B-road which sat between the hall and the car park. 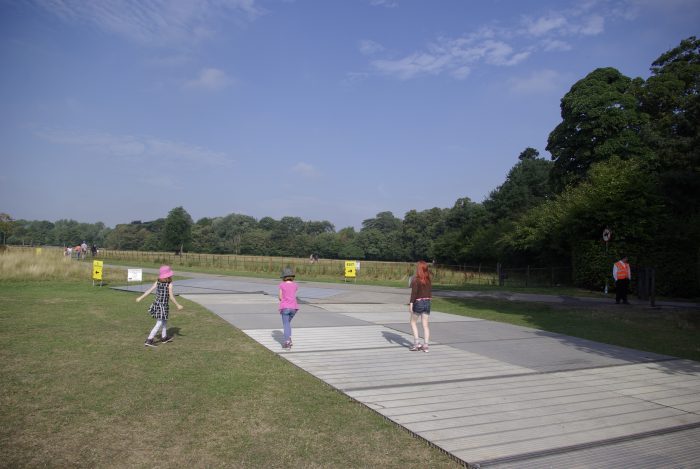 Through the bag checks and a check in with the press office to say hi and collect our lanyards (these were available to buy from the CBBC gift shop) and we set off to explore the festival venue. 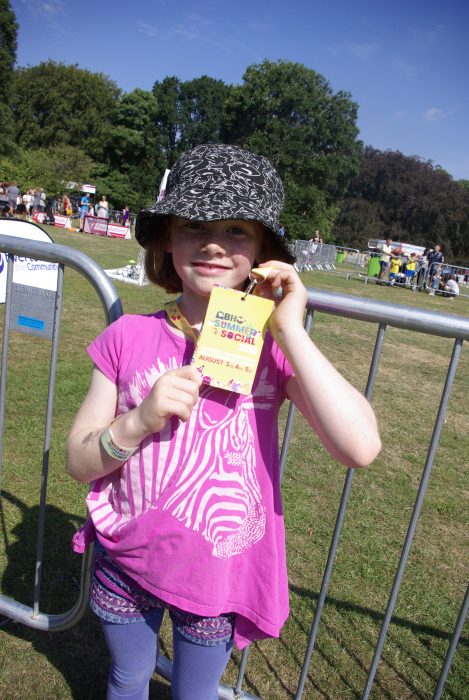 Our first stop at the CBBC Summer Social was the Clangers Garden. The girls were not interested at all. They’re not into the Clangers (they’re too cool for CBeebies now you know!) and grumbled all the way around. Not that there was much to see to be fair. It was some cardboard cut-outs in Croxteth Hall’s walled garden, which was pretty enough. I enjoyed it anyway. 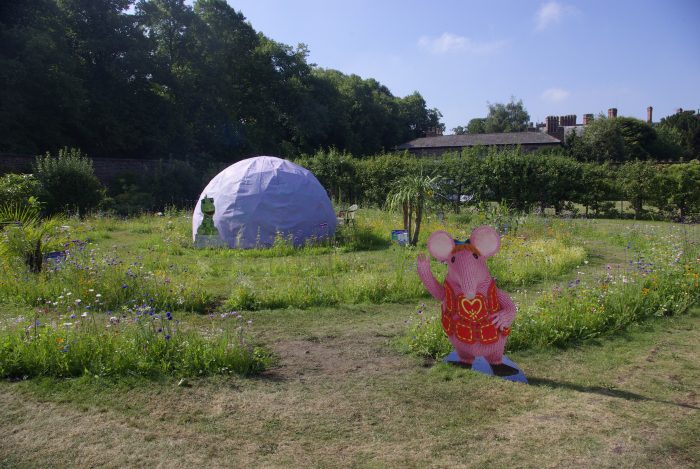 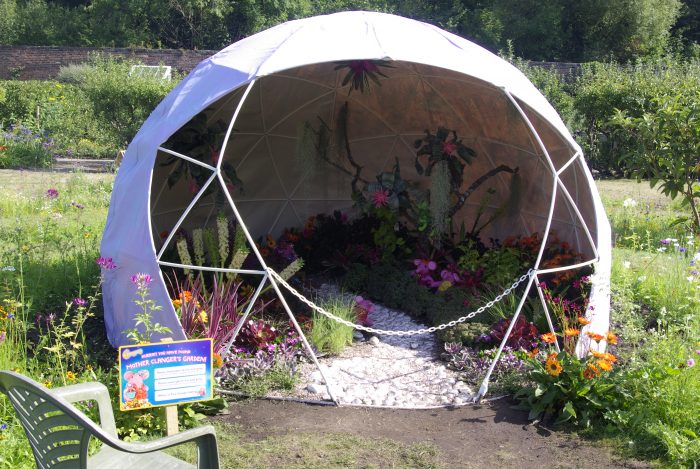 Next, we checked out the Summer Social stage. There was Naomi presenting, and doing some dancing, and introducing us to a giraffe (not a real one, but a very impressive puppet one we saw at a puppet festival a few weeks ago). It was a lot of fun and the children there loved it. Check out the pics on Instagram to see it. 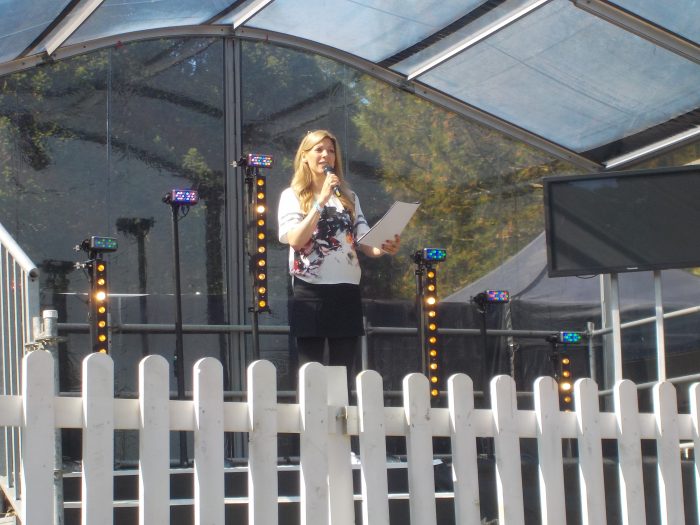 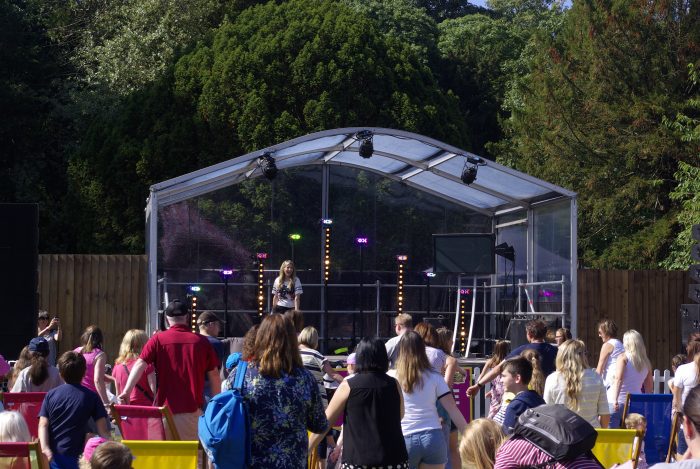 A bit of a walk around and we saw this. We think she’s from the Furchester Hotel. Sadly another show the girls are too cool for. 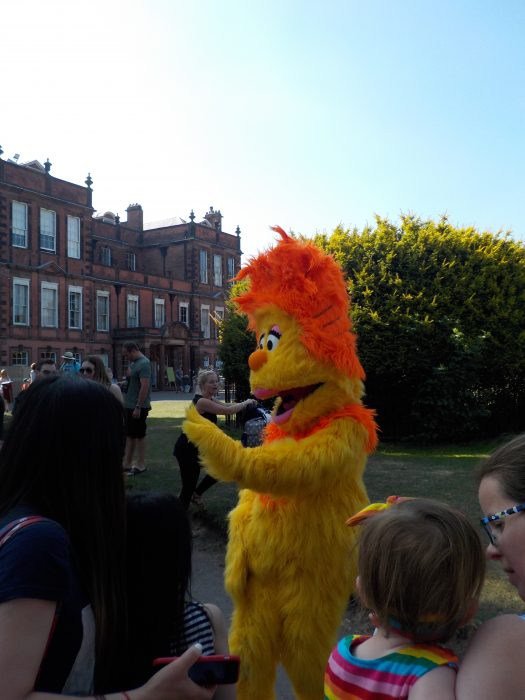 Our next activity was The Bucket List. Now, the twins especially are proper into their football right now so they loved doing this – it’s a challenge where you need to kick the ball as high up as possible. If you can get the ball into the bucket marked 100 at the very top, then you get your name on the leaderboard. It didn’t happen for any of us but it was fun trying. This was free. 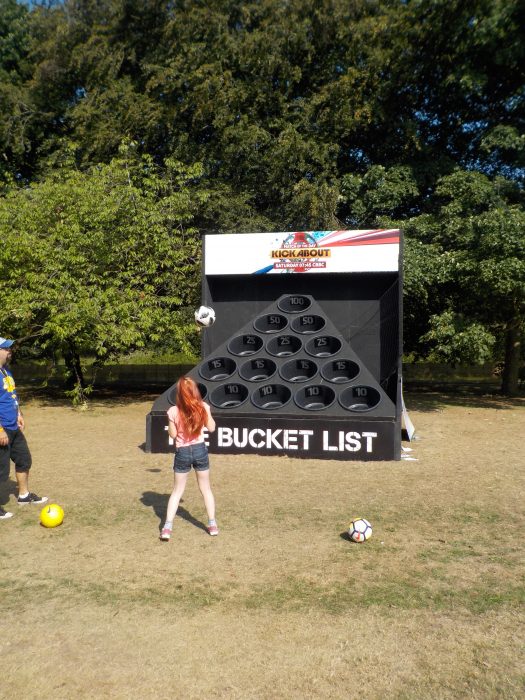 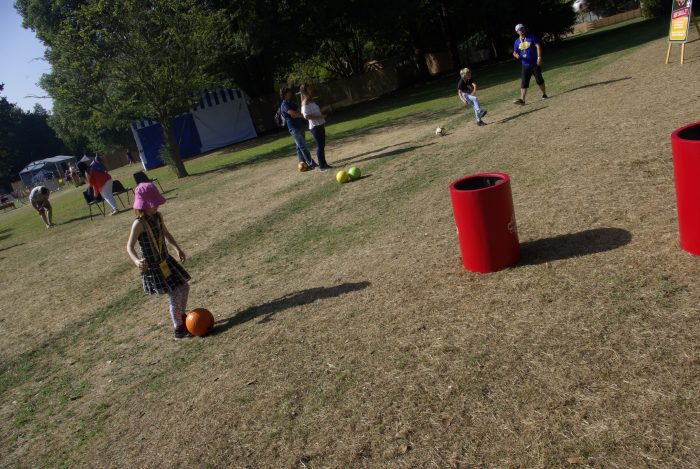 We had signed the twins up for a sesh with Everton in the Community so returned there for our time slot. One twin decided to duck out at the last minute but the other got stuck in there. She loved the half hour of running about with professional coaches and other football-mad kids. She may even have scored. The rest of us just sat in the sun and watched, enjoying doing very little. 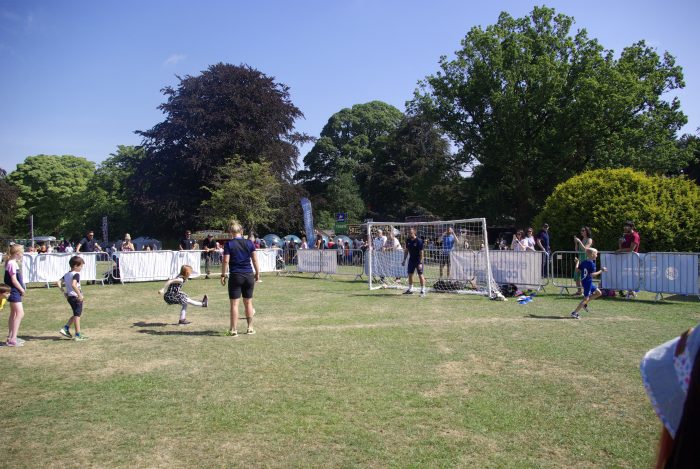 We had a mooch over to the CBeebies area to see what was going on. This area was a stage with shows aimed at tots, and a tent for the Bedtime Story, which was at regular intervals. The girls moaned at me for making them go to the CBeebies area (see previous notes about being too cool) but I did consider asking the staff who they had reading the Bedtime Story. Because I’m not too cool to sit and listen to Tom Hardy or Benedict Cumberbatch read anything, frankly. 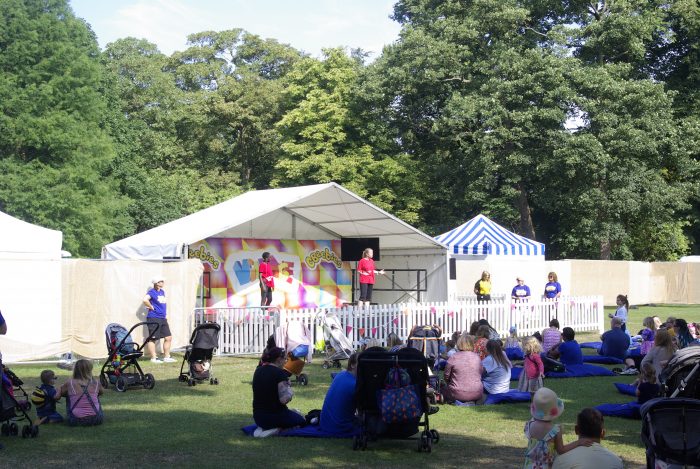 The tween spotted a stand for Buzz, which is a BBC app aimed at kids which allows them to do all sorts of fun stuff – it sounds like Snapchat but more fun and with better controls. I’d never heard of it but apparently, all three girls have it installed on their tablets. News to me! So I enjoyed hearing all about it, and they enjoyed getting in the booth and recording some bits which may appear on the app very soon. Look out for three crazy ginger girls telling some very odd jokes.

While here, the tween also got very excited about the prospect of applying to be on a new CBBC show, so we took an application form and returned later in the day, application form completed, to film a short audition video. The guy on the stall told me they’d had over 100 applications on the Sunday alone, so it looks like their efforts at getting children interested paid off. You might see us on CBBC in the future. 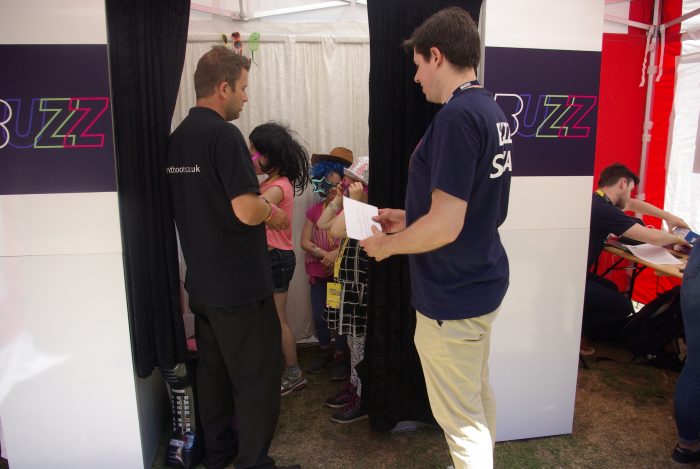 While the tween was bending the ear of the audition team, the twins were enjoying a turn on the traditional swingboats. The rides cost extra (this one was £2 per rider) but they seemed popular enough. There was also a carousel, a ferris wheel, and a swing chair ride. 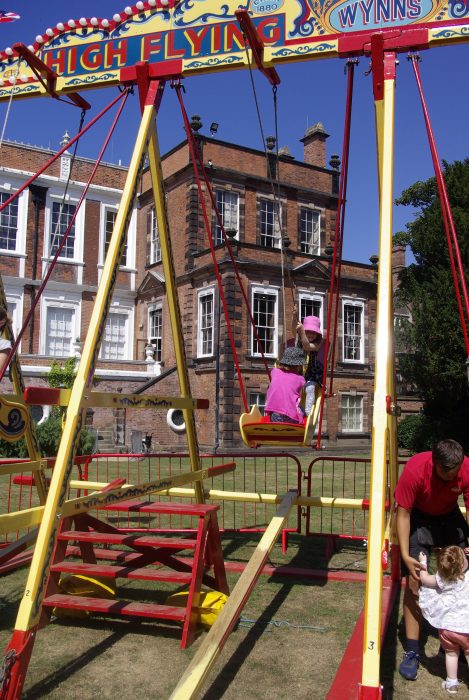 After lunch – we had our lunch with the press team but there were lots of stalls available to purchase food, such as a fish and chip stand, street food, and Indian food, as well as ice-cream vans and drinks stalls – the plan was to settle in front of the main stage and bag a place for the one thing the girls desperately wanted to watch – The Next Step. This is a big thing.

The Next Step is a pseudo-reality TV show from Canada. It’s a drama series about dancers in a dance studio. They are forever trying to make it to regionals and having mini-dramas in their lives which usually involves some sort of teen love angst. It’s alright. There is at least some good dancing in there, and the girls love it. Being able to see some of TNS crew in at the CBBC Summer Social in England is a BIG thing.

So we settled by the stage and watched the winners from another CBBC show Got What it Takes, which was quite good. Then it was Sam and Mark who I know from Pop Idol and the girls know from shows like Copycats and Sam and Mark’s Friday Wind-Up.

The Next Step came on and the front of the stage got very full. We had to abandon our patch of grass and stand and walk nearer the front. We still couldn’t see very much – the Next Step are massively popular. Thank goodness for the big screens. The girls enjoyed it though. I did put them on my shoulders, but only one at a time! I’m good, but I’m not Wonder Woman. 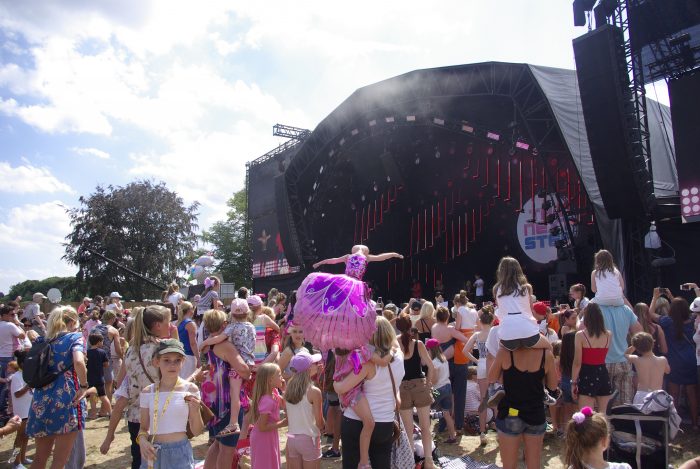 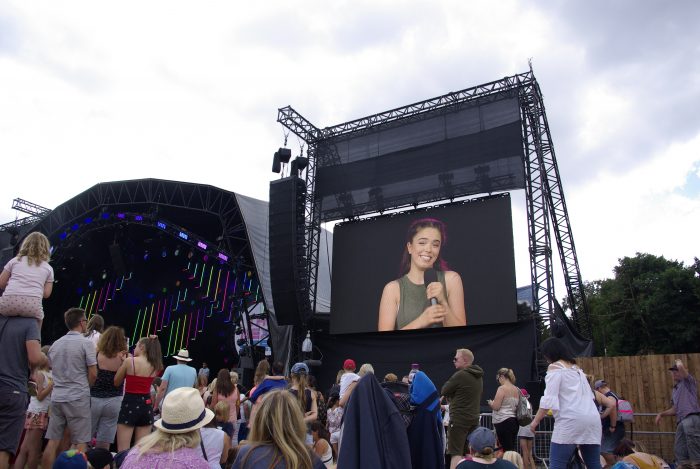 Once the Next Step had finished we headed over to the Meet and Greet area, which was rammed. TNS were due to start a signing in under one hour and they were already proving popular over here too. We prepared ourselves for a long wait. These guys made it a little more bearable though – a brass/oompah band playing 90s club classics. The mums and dads were loving it. The children had no clue what was going on. I was gutted when their set was over.

The queue for the meet and greet seemed to go on forever. There was on logic in it. Some people seemed to get in faster than those who had been waiting longer. The security were doing a good job in making sure everyone was safe and calm but there were some very angry people in there. It didn’t help it was a hot day but thankfully the queue was in a shady area.

It took about an hour for us to get in to meet the stars. The girls were getting very fed up. We always knew we were in the right place but it was pretty frustrating. My best advice is that if you want to meet someone specific and don’t want to queue half so much then you should buy the special meet and greet tickets. These will cost extra but it could be worth it to buy you back some time to spend elsewhere on the day.

Once we were in the meet and greet area, we got to choose whose queue we went into. Then we had to wait some more. As we were press, we got to rejoin another queue to meet more stars, but regular guests weren’t able to do this, so you need to choose your stars carefully. One of the queues was moving much faster than the others, so it was tempting to join that one, but that was because once you got to the stars you were only allowed an autograph or a photo, not both, which was a little bit rubbish when you’ve waited so long.

BUT once the girls were in and meeting their favourite TV stars, they instantly forgot about the waiting and the faff, and that’s all that matters. We are very fortunate that we got to meet more than a regular punter would be allowed and for that we are grateful – the girls sometimes forget how lucky they are. So here are some pics of them meeting some of the cast from The Next Step, and also the team from Art Ninja. I did try to convince them to hang around for Dr Ranj too but “he’s from CBeebies, and therefore for babies“. Sorry, Ranj. Maybe next time? 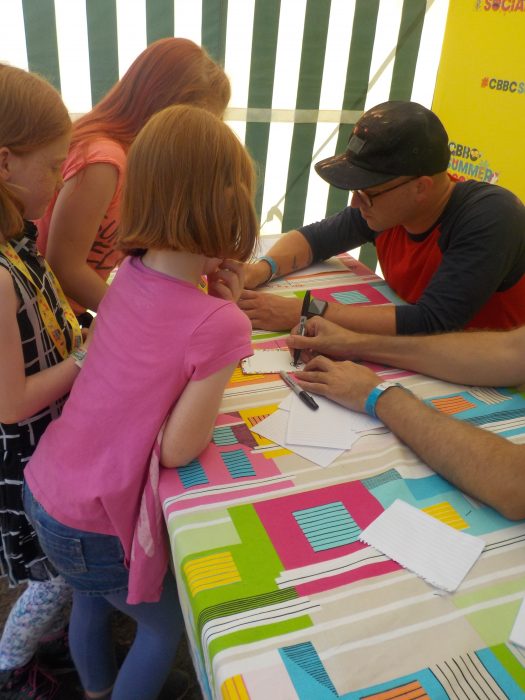 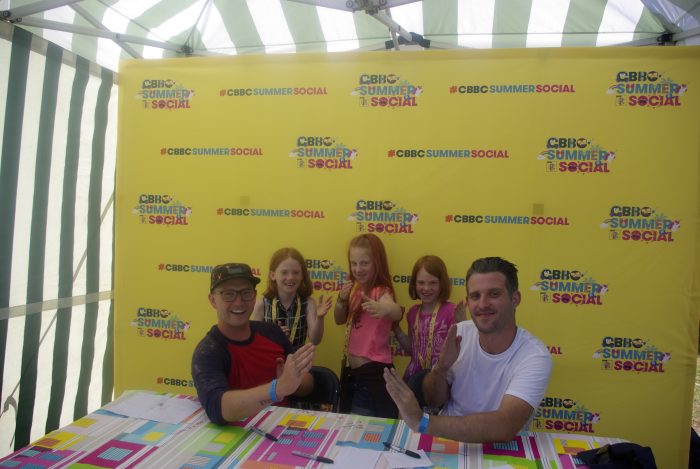 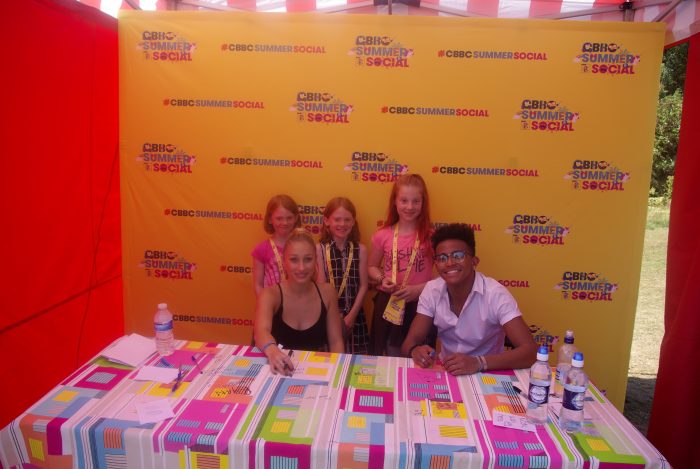 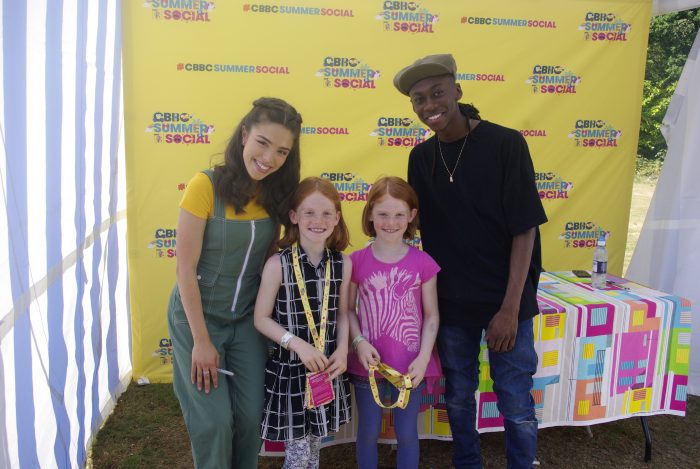 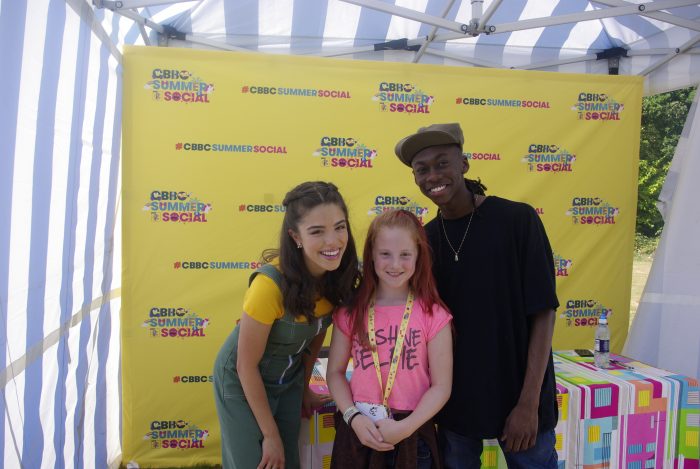 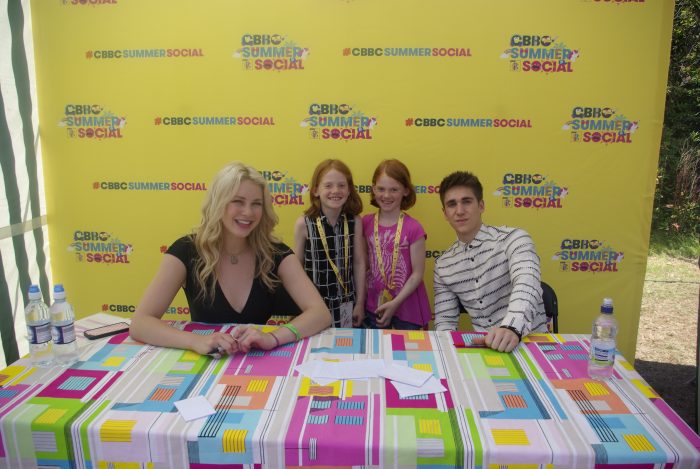 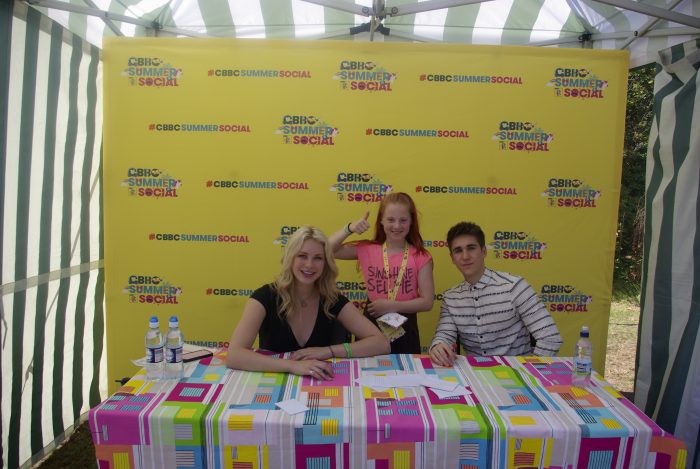 The day was slipping away and there was so much we seemed not to have done, but it didn’t matter as we had done what we had come to the CBBC Summer Social for – meet the stars of TNS and more. So we just had a mooch about enjoying the festival atmosphere. And it was a great atmosphere throughout the whole day – apart from the queues at the meet and greet, everything was very chilled and friendly.

We headed over to Raven – a free activity based on an outdoor adventure TV game show which the twins love – for the last session of the day – we didn’t have tickets as they’d all gone by the time we went to book at about 12noon, but we were told that if you turned up and waited you could have any excess space. Sadly after waiting about 30 minutes there weren’t enough excess spaces for us. Gutted. Cue girls getting grumpy again. Time to go home soon maybe? 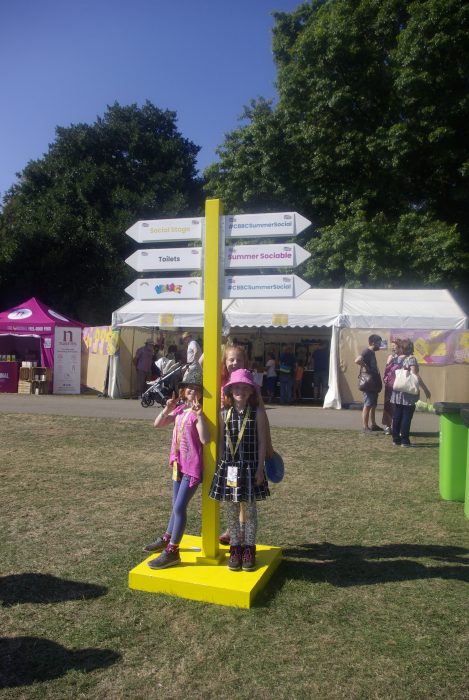 Our last stop of the day was Croxteth Hall’s own petting farm. This is open to visitors usually and today they were doing free admission and also had a cafe on the go. So we popped in there to grab something to eat and chill a bit more before our two-hour journey back home to Yorkshire. 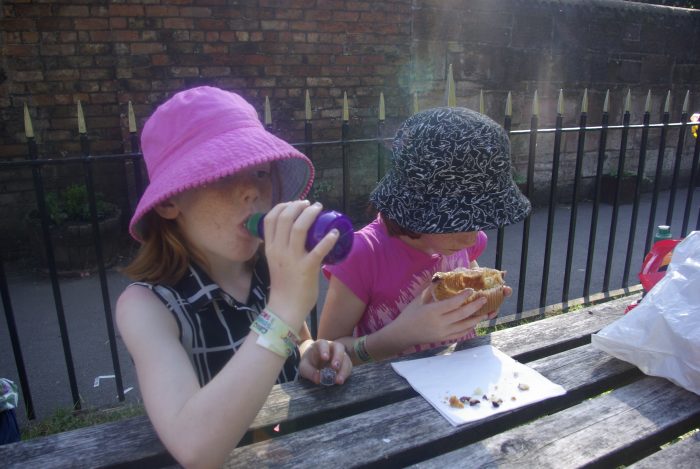 There was something for everyone at the CBBC Summer Social. It was pretty well organised, clean, and very child-friendly. Have a read of Jenny’s review over at The Brick Castle – she and her family seemed to do everything we didn’t!

Disclosure – we were press guests of the BBC for the purposes of this review. 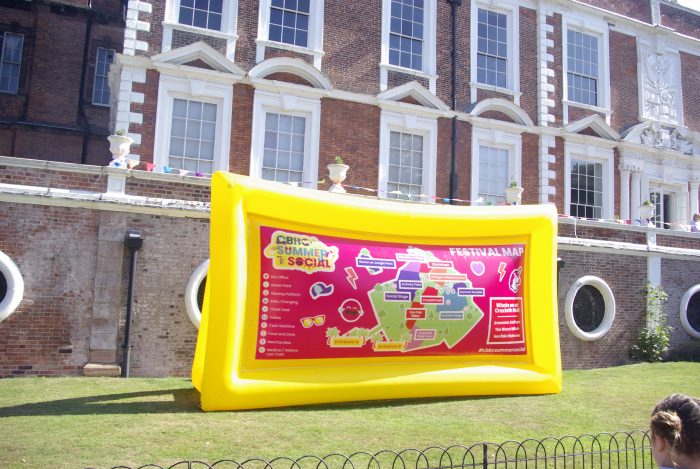 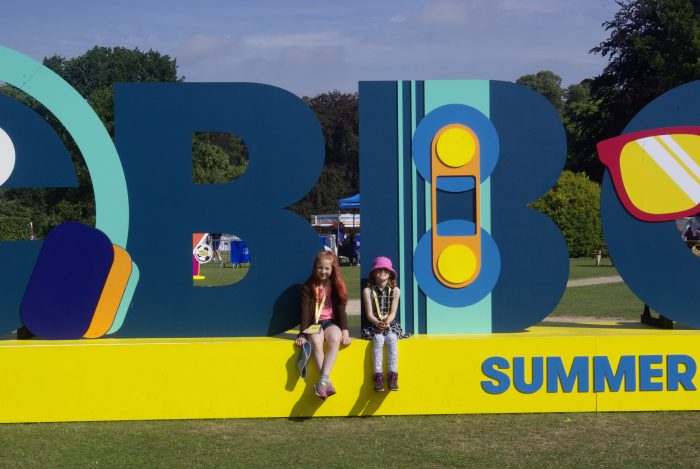 Have a look at the highlights from the Sunday afternoon of the CBBC Summer Social at https://www.bbc.co.uk/events/e3c6gw/play/b0bfkkzv