Crealy Adventure Park is a family theme park near Exeter in Devon, about a 30-minute drive from our base at Andrewshayes Holiday Park. We spent the day here during May half-term, and we had a fab time!

How to get to Crealy Adventure Park

Crealy Adventure Park have around 60 rides and attractions and are situated not far off the M5. Parking is ample. If you use a sat-nav, head for Crealy Meadows.

We arrived just before lunch and decided to eat the bulk of our food before we went in. Once done, we made our way to the ticket desk to collect our tickets. There were no queues at all, despite it being a fairly nice day and half-term.

Half-term was Pirate Week! We’re not sure if Crealy was any more pirate-y than normal but there were some pirate themed things kicking around, and some hats provided for you to wear if you wanted. 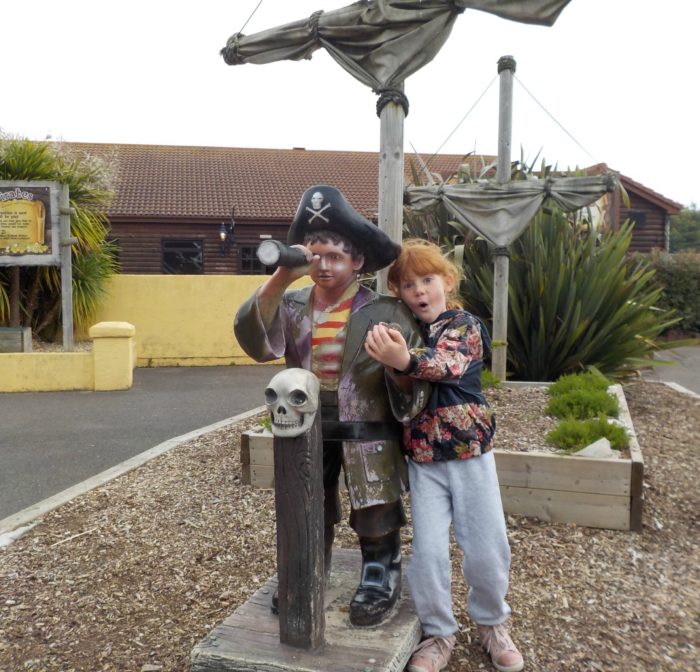 What to do at Crealy Adventure Park

Our first stop was the Flying Dutchman pirate boat – which you can see on our video (below). The girls loved this. Me not so much, so it was definitely Dad’s turn for this ride. I braved the Maximus rollercoaster later on, which despite it being not that big, was very fast and quite twisty. One of the twins loved this. The other not so much and I was in the doghouse for the rest of the day for taking her on it.

The twins’ favourite attraction was the driving school. You got a little car with stop and go pedals (and even indicators) and a road layout to drive on. The operators told everyone to drive on the left and give way like you would on a real road, which excited the twins immensely. If it was your first time, you could claim a Crealy driving licence at the exit.

All of the rides have some sort of height restriction – the girls were ok for every ride they wanted to go on, though for some either myself or Dad had to go on with them. The ride operators are pretty thorough, so be warned if you queue for a ride and you’re not within the requirements, you could be wasting your time. There are boards at the entrance to each ride so you can check before you join the queue.

Crealy has a few playgrounds with tunnels and slides. There’s a Wild West themed ‘Fort Crealy’, a pirate-themed ‘Pirates’ Revenge’, and also a Dino Dig area, which is a sandpit with some play equipment. The girls loved these slides, especially the double one where the twins could go down together. Just next to this was a death slide (drop slide) that was a lot of fun for the 9-year old, who is much braver than I ever was!

Another firm favourite was The Flying Machine, which is a reasonably-sized swing chair ride. The operator had all the children squealing and sticking their arms out like they were mini aeroplanes. The girls went on this more than once! You can see this on our video (below)

There were some much bigger rides too, including a waltzer-coaster, a log flume, and a water-tube slide. For hotter days, there is a splash zone, and a water cannon ride which looked very wet indeed!

We also enjoyed a trip around the dinosaur safari ride, and a turn on the traditional carousel.

The day we visited, the weather fluctuated between hot and sunny, and raining. If it does rain in your visit. There are some indoor attractions. We conducted a thorough testing of the huge soft play frame, and we particularly liked the rides in Lost Bay of Atlantis, which had a kid-friendly shark mini coaster, and a mid-sized ‘Dolphin Drop’. 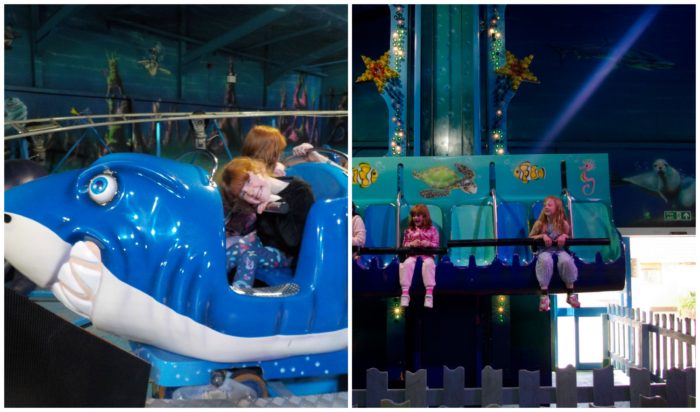 Crealy have lots of animal attractions. We spent some time at the lake feeding the fish from the fish-food dispensers nearby (extra charges). The fish were huge and very hungry.

We introduced ourselves to the horses and donkeys, who were very friendly and enjoyed the odd nibble on the grass we offered them.

Some of the animals were indoors, such as pigs, goats, lambs, guinea pigs, and reptiles. If you’re lucky, you may even get to hold some under the supervision of a keeper.

There were lots of food outlets to choose from at Crealy. We had an early picnic in the car before we went in and we were too busy having fun to think too much about food. We did have some snacks in the afternoon – a couple of hot dogs, some ice-cream, or a stick of candy floss – but not much more. If you want something more than a quick snack, there are family restaurants such as Blackbeard’s Family Buffet and Union Jack-ets.

Crealy is a nice-sized family theme park with plenty of rides and attractions suitable for all ages. It was clean and easy to get around. Staff were plentiful and helpful.

We didn’t have to queue too much. The longest queue for us was for the Maximum rollercoaster at about 30 minutes.

Loos were plentiful and well signposted (always a winner!)

The food outlets that we tried were usual theme park prices and reasonable quality.

Disclosure – we were guests of Crealy Adventure Park. All adventures (and opinions) are our own! 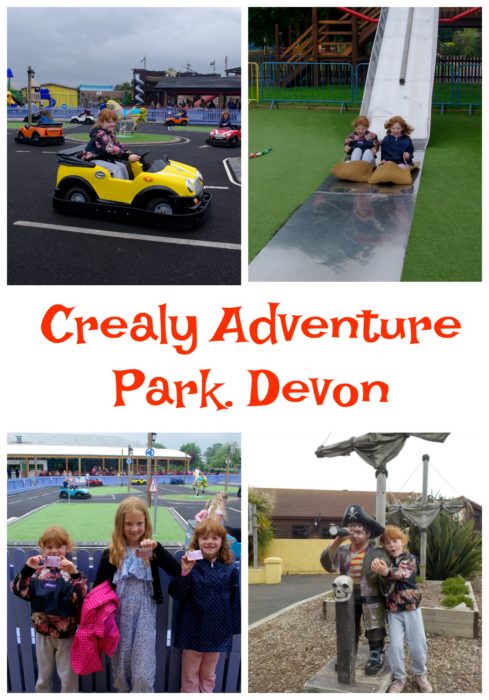