The Camping and Caravanning Club asked us to try out one of their club sites. The club, with over 250,000 households as members, own over 100 camp sites in the UK, and certify over 1,600 more. They have recently invested almost £5m in their own sites in the past year, with another £4m of investments to come.

They have recently introduced Ready Camp – a ready-to-camp facility at 17 of their club sites. You can just turn up and use one of their pre-erected, fully-equipped tents for six people. Sounds awesome if you’re not sure if camping is for you and you don’t yet want to invest in expensive camping equipment. 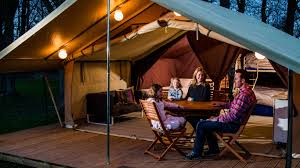 (c) The Camping and Caravanning Club

However, we already have our own tent – our trusty Outwell Birdland 5, and plenty of camping gear. It means we’re a little snug in our car, but we’re used to it!

We chose to try out Dunstan Hill Campsite, a 150-pitch site close to the market town of Alnwick in Northumberland. We chose this site because it had good access to a beautiful beach, and looked like a nice, family-friendly site. Indeed it was. We spent a very pleasant three nights here in August (2015). 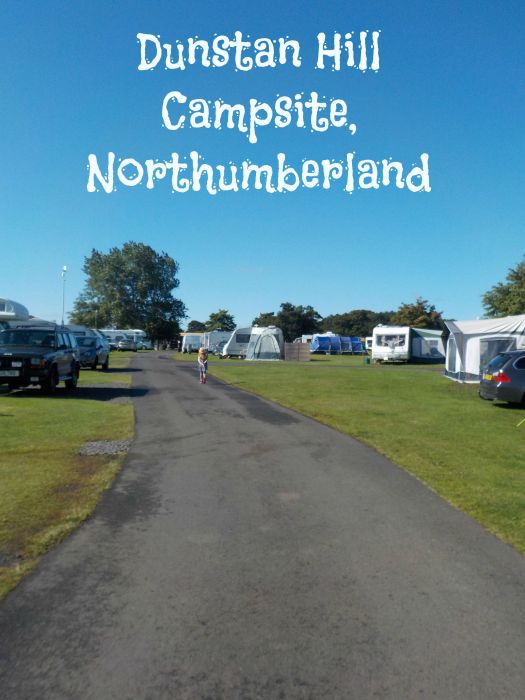 This is going to be a long post, so bear with me. You can skip to the sections you want. I will talk about what we did with our time, the site facilities, how to get to the site, and how to find your way to the beach.

How we spent our time at Dunstan Hill campsite

We arrived just before the reception desk was due to close at 5:30pm but found them still in full swing. The site was busy but not noisy. Check-in was easy. The pitch had been booked through the Camping and Caravanning Club website and they already had our details. We were given a choice of two grass electric pitches – one in the middle of the site, and another right next to the toilet block. We chose toilet block for the win!

For us, the toilet block is hugely important. First that they have one, and second that it’s not too far away. Clean can sometimes be an after-thought we have found. Thankfully, we’ve never had any that are too bad. This one was fantastic! Very clean and well looked-after. There were plenty of toilets, showers that were hot and actually pumped out water at a reasonable rate, and private sinks for teeth-brushing. If I had to be picky, I’d say that there weren’t enough of the private sinks as there were queues at peak-times, but we more than managed. Overall, a big tick on the sheet for our toilet block. Dunstan Hill campsite actually has two toilet blocks – one at each end of the site, so it’s not too far to walk to one no matter where you are pitched.

Our pitch was given the thumbs-up by Dad, who puts a lot of importance on pitch levels and ground consistency. Too hard and he can’t get the pegs in. Too soft and they come back out too easily. This ground was ideal, apparently. Another big tick.

Once we had set up our temporary home, we went off to explore. We decided to go and have a look at the beach. The beach is officially a 20-minute walk from the site along a mainly car-free path. With little legs, it was nearer 30 minutes, but still not too bad. We didn’t know the way, so followed others and asked where we could, but we didn’t get lost once, which is unusual.

We found the beautiful beach and had a good dig. 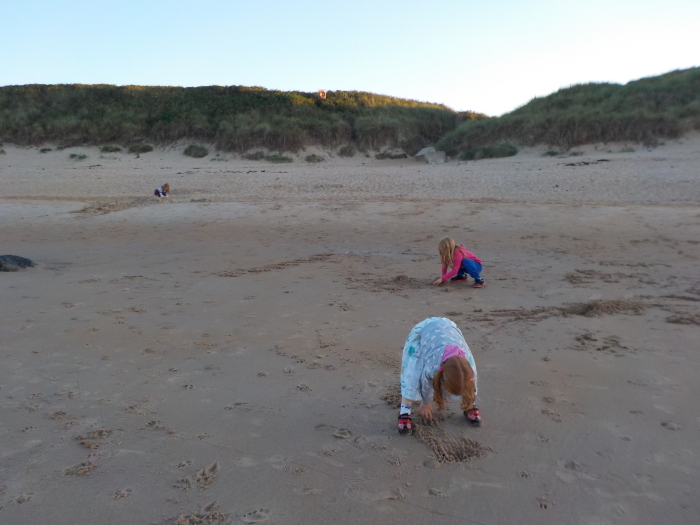 Then we returned to base before the sun set. 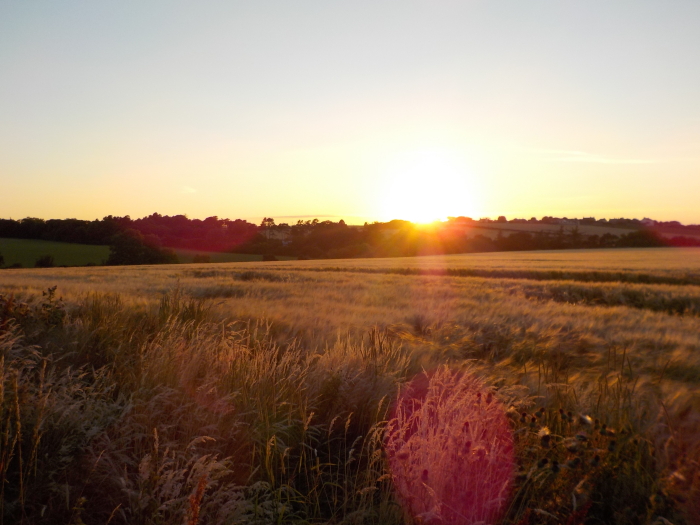 We spent a very comfortable night in our tent. The next day, we drove the 20 minutes to Alnmouth for Alnwick train station, where we parked for free, and took the train into Newcastle city centre. It took about 30 minutes, and the trains run approximately every hour. We had a lovely day out in Newcastle, walking up the riverbank, and visiting the Seven Stories centre. 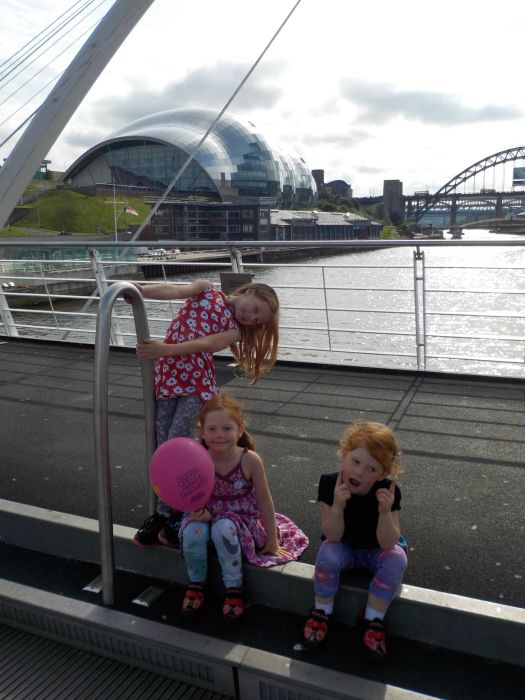 We came back via Alnwick to have tea at a nice pub called The Black Swan, which we highly recommend for families.

It started to rain just after we got back to the tent at around 8pm.

On the Friday, we woke up to this. 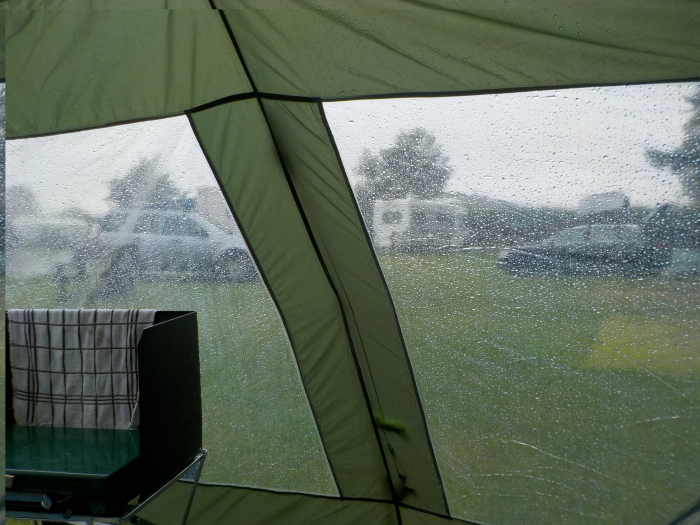 We abandoned our plans to visit Alnwick Castle and instead drove down the roadworks-fest that is the A1 to spend the day at the Metro Centre in Gateshead (in normal traffic, this should take one hour max). We had a nice day. We did some shopping, had some lunch, and went bowling. Beats getting rained on. We may or may not have bought a selfie stick from the pound shop. 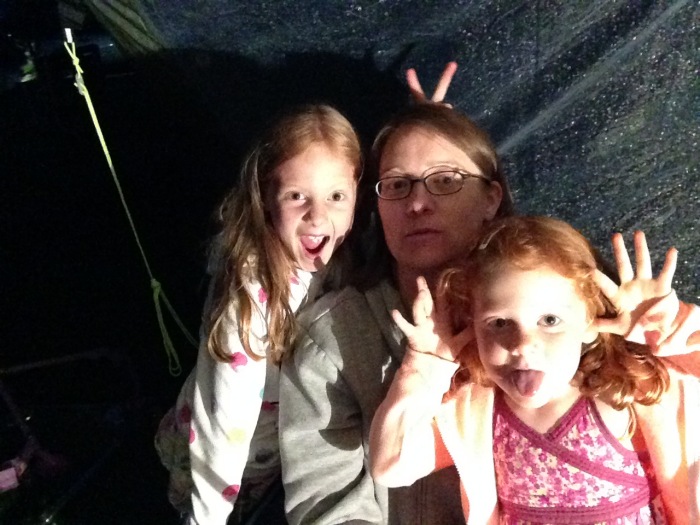 We went home via Alnwick again to pick some food up from Morrisons for a late-night camping tea of cooked chicken and salad. With chocolate brownies for pudding.

Saturday, we got up and whacked on our usual camping trip staple of bacon for sandwiches. Yummy! 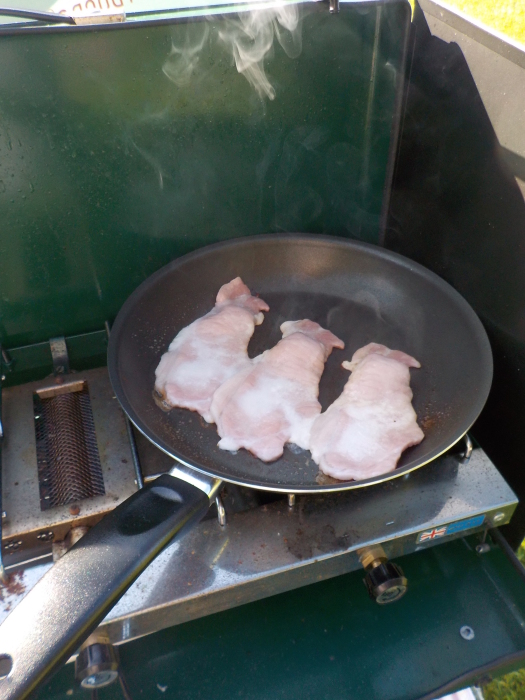 Then I took the girls for one last trip to the beach whilst Dad packed up. The sun was shining, and there was not a cloud in the sky. It was the day we could have done with the day before. Never mind. That’s holidaying in England for you! For instructions of how to get to the beach, read on. 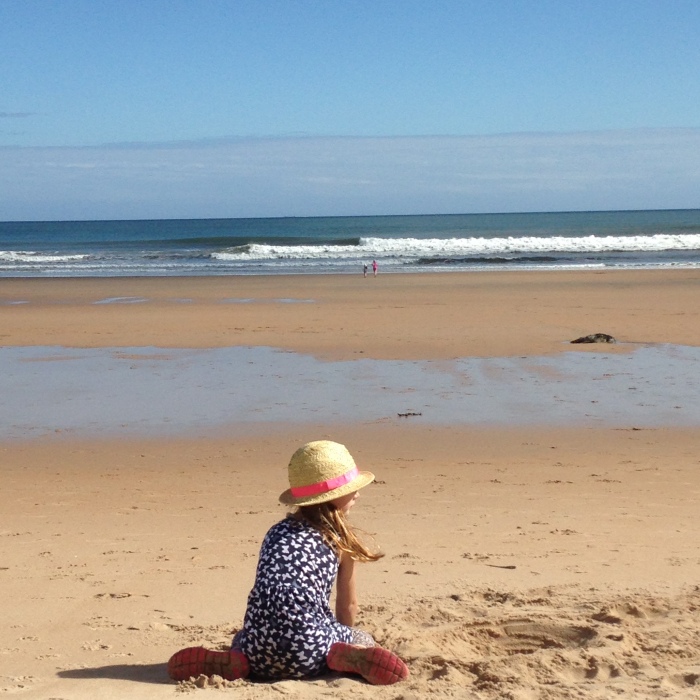 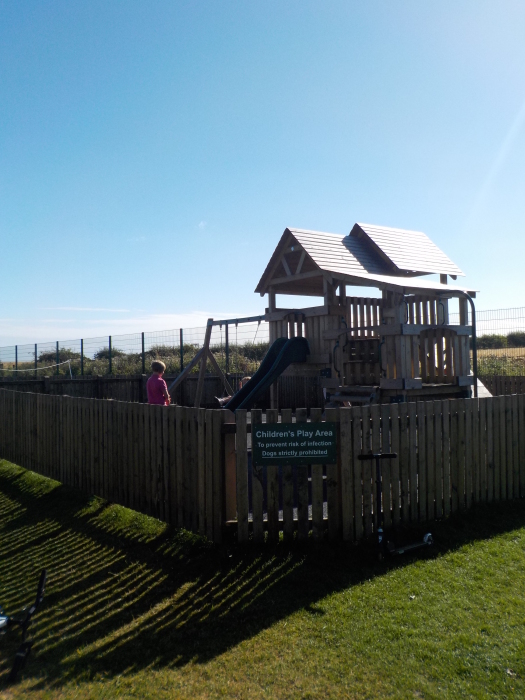 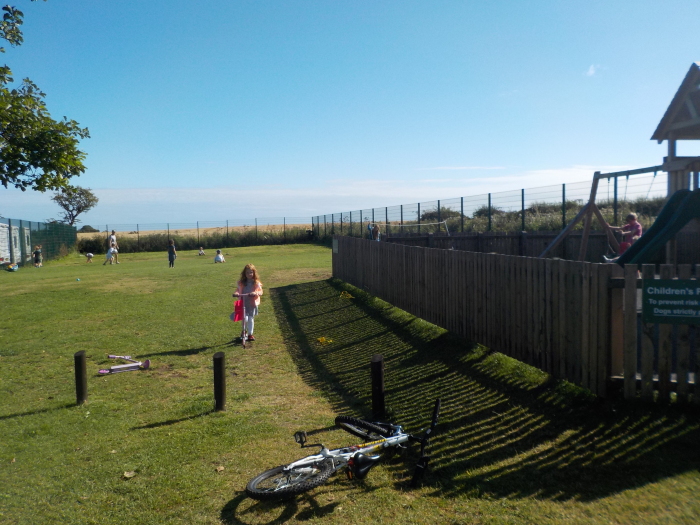 The park was new and clean but not that big. We have a climbing frame in our garden at home not much smaller than the one here. It was very popular as there were lots of families on site. I would like to have seen something bigger as my children got bored of it pretty quickly, but I like that it was very well maintained, and we weren’t there to play on the park all day anyway. If play parks are your thing, there looked to be a very good one in Embleton, about five minutes drive north.

The nearest town is Alnwick, where there are some take-aways, pubs and restaurants, and a couple of small supermarkets for shopping. This is about a twenty minute drive. Parking is free after 6pm but it gets busy during the day.

There were a couple of pubs in nearby Embleton, but we didn’t try them out.

What we liked about Dunstan Hill campsite

The site was quiet and ideal for families. There was also a lot of older couples, and well-behaved dogs. The gates were locked to cars at 11pm. The only noise was some early morning baa-ing from the sheep in the next field. Considering we were right next to the toilet block, we had few disturbances from other people.

The pitches were plenty big enough, even for the grandest of tents.

The site didn’t get boggy, even with the monster-amount of rain we had one night.

It was full of nice people. No big groups. No naughty dogs. Children that played nicely together.

It was awesome for scootering! The roads were smooth and flat – which can be rare. We have had disappointed children in the past when we’ve taken their scooters only to encounter roads of gravel or grit. At Dunstan Hill, we did lots of scootering! 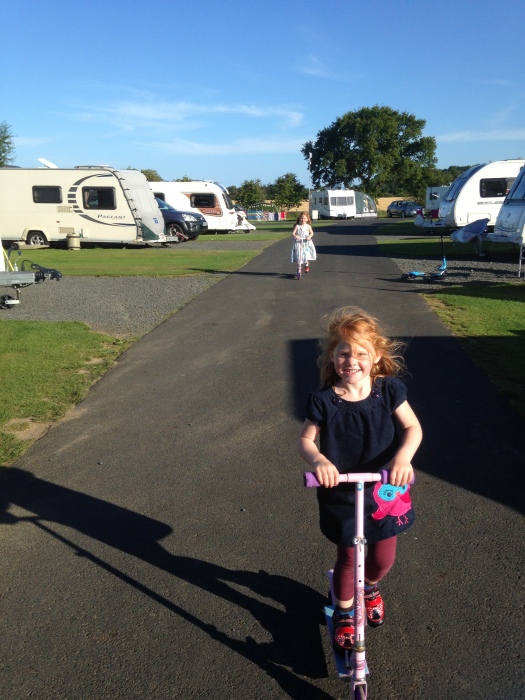 How to get to the beach at Dunstan Hill campsite

The beach is around a 20-30 minute walk from Dunstan Hill campsite. It is down a rural path that got a little soft during the rain. It’s nettley in places too, and watch out for the occasional piece of dog mess that doesn’t get picked up.

There are no facilities at the beach – no toilets, no ice-cream van, and nowhere to buy buckets and spades. You can buy them however from the campsite shop/reception.

The beach was popular with dog walkers, and with surfers. There is parking a short walk from the beach but it is limited.

The beach is overlooked by Dunstanburgh Castle, and you can get to it from the path below. 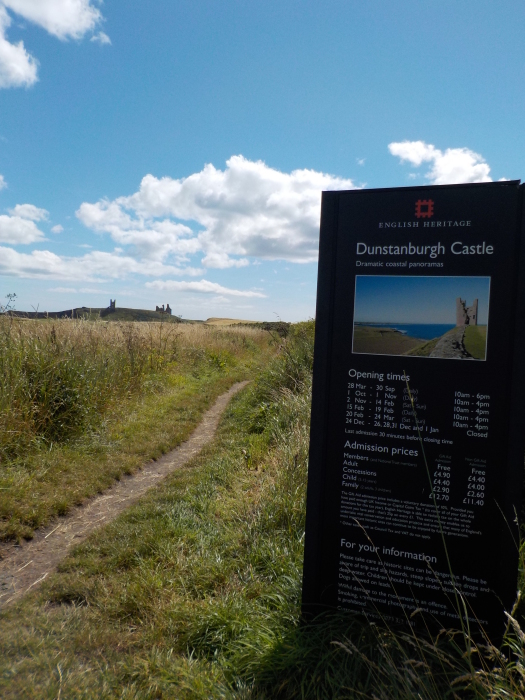 Here is how you get to the beach from Dunstan Hill campsite, in pictures.

The beach was beautiful and well worth the walk. We really wanted to do a full day there but just didn’t time it well weather-wise. We highly recommend you take your bucket and spade if you’re staying at Dunstan Hill campsite.

How to find Dunstan Hill campsite

From Alnwick you can follow the brown signs to Dunstanburgh Castle, and then the brown campsite signs.

The site is on an un-numbered road between Embleton (to the north) and Dunstan (to the south). DO NOT turn up a road signposted Dunstan Hill. Go a little further and you’ll see the site up ahead. You are looking for this….. 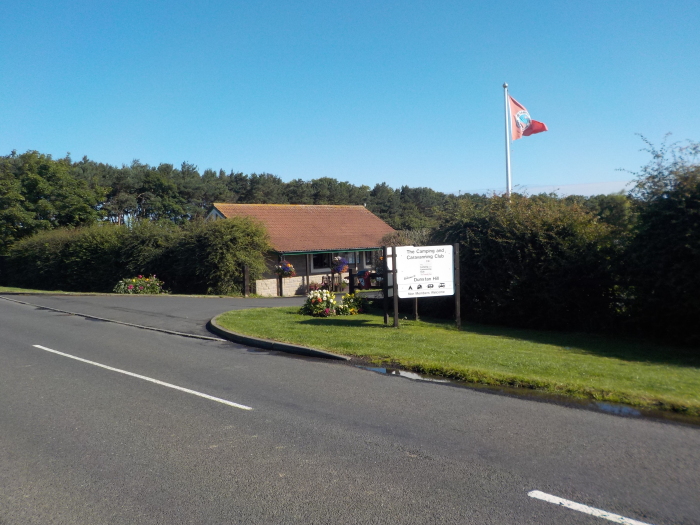 For an overview of where everything is……..

So that’s it – Dunstan Hill Campsite in far, far too many words. We had a brilliant trip and it really was a nice site. Well recommended as a pleasant, family-friendly site from where you can explore the beautiful Northumberland coast and its many castles and beaches.

Disclosure – we were guests of the Camping and Caravanning Club for the purposes of this review. All opinion (and selfies) are our own.