Without characters, Disneyland Paris would be just nothing more than a very good theme park. For us, the characters make our visit to Disneyland Paris complete. We don’t really have favourites – we love them all, and our trip wouldn’t have been the same without them.
If you’re thinking of a trip to Disneyland Paris, then you really should make a big effort to meet the characters. Autograph books can be picked up for less than 10euros from the gift shops, or take your own. 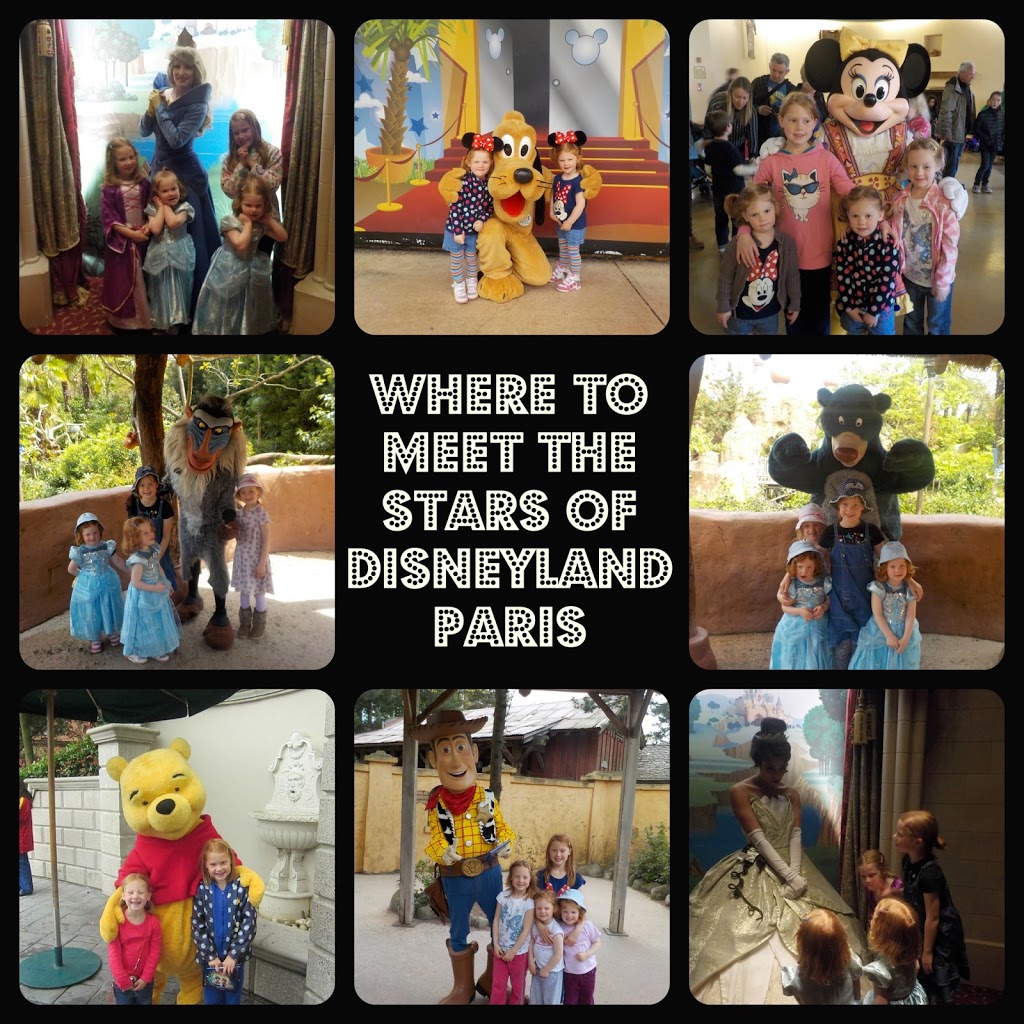 Here are the places you can meet them….

Even the cheapest of the main Disneyland Paris hotels (the Santa Fe) gets regular visits from Mickey and friends. In the past, we have met Mickey, Pluto, Donald, and Goofy at the hotel. On our last visit, we only got Minnie. The visits seem to be less frequent than in previous years, but it’s still a good way of bagging an autograph and a photo of some of the main characters and reducing the time you spend queuing in the park.

The Princess Pavilion in Fantasyland is home to a plethora of Disney princesses. Here, we have met Cinderella, Sleeping Beauty, and Tiana. We have also seen Ariel, Belle, and Snow White coming in and out.
To meet a princess, you need to wait for a pass in a short queue near the windmill in Fantasyland. You are given a ticket for a 30-minute window to come back and meet a princess. Having been in previous years where the queues were horrendously long, I think this is a much better system HOWEVER we queued for our passes before 12noon each day and only managed to get a pass for the last hour (from 8pm). If you don’t get to the windmill in the morning, you won’t stand a chance of seeing a princess that day.
When you turn up for your slot, you join a much reduced and civilised queue. You get pot luck from a rota of two princesses at a time. The host will ask who you’ve met already and try and get you to meet a different one but if they don’t, then say so.
We love meeting the princesses. For my little princess fans, this was one of the highlights of our trip. You get a few minutes with your princess. They speak very good English, and the photographer is very professional and lets you get on with it. You are more than welcome to take your own photos, but the professional ones are very good and for sale as you leave.
An absolute must-do for princess fans! 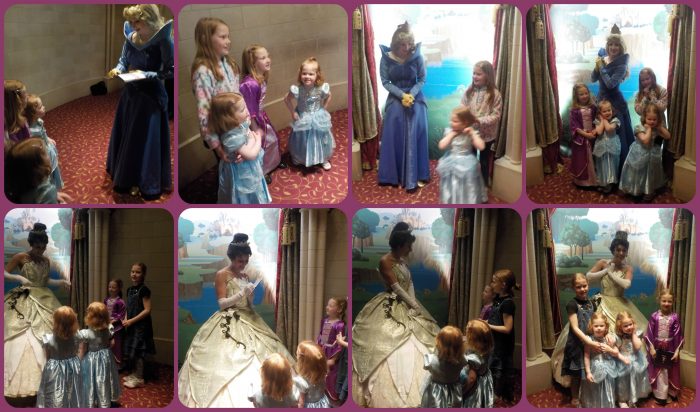 Adventureland is the pirates, jungle, and desert island area of the main Disneyland Paris park. Here we met Baloo from the Jungle Book and Rafiki from the Lion King, in the gazebo next to the Hakuna Matata Restaurant. We also found Woody from Toy Story. Some of the characters just sort of pop up and you have to grab them quick. Here the queues are much shorter, and Baloo was more popular than Rafiki. Both were very funny and friendly. 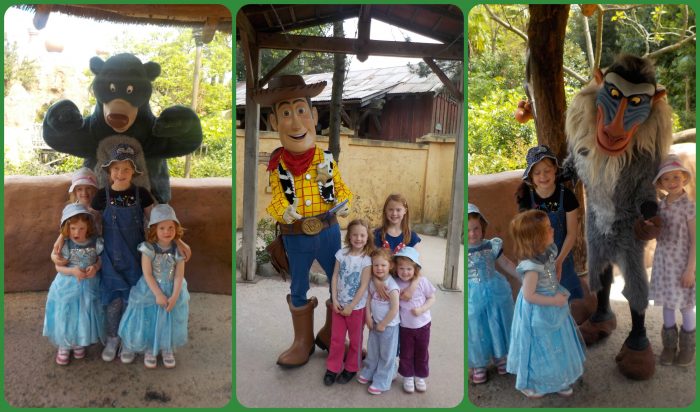 If you’re a Goofy fan, he often hangs around in Frontierland. It’s a bit of a bun fight but Goofy sorts ’em out and you get your turn. 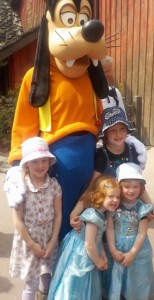 Outside Casey’s Corner on the end of Main Street, there is a little stage. Currently, you can meet Rapunzel, but when we went the queues I reckon, were at least two hours long. We didn’t hang around for her, although I haven’t seen her in the Princess Pavilion so if you want to meet her, you’ll just have to sit it out. In the past we have met other characters here – our favourite was Winnie the Pooh. 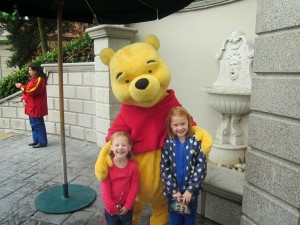 The Disney Studios park is smaller than the main park and is chock full of characters with much smaller queues. Head over to Crush’s Coaster and you’ll see the character area. This is us meeting Mickey Mouse……..
Other characters to meet over here include Pluto, traditional-costumed Minnie, and Buzz Lightyear. 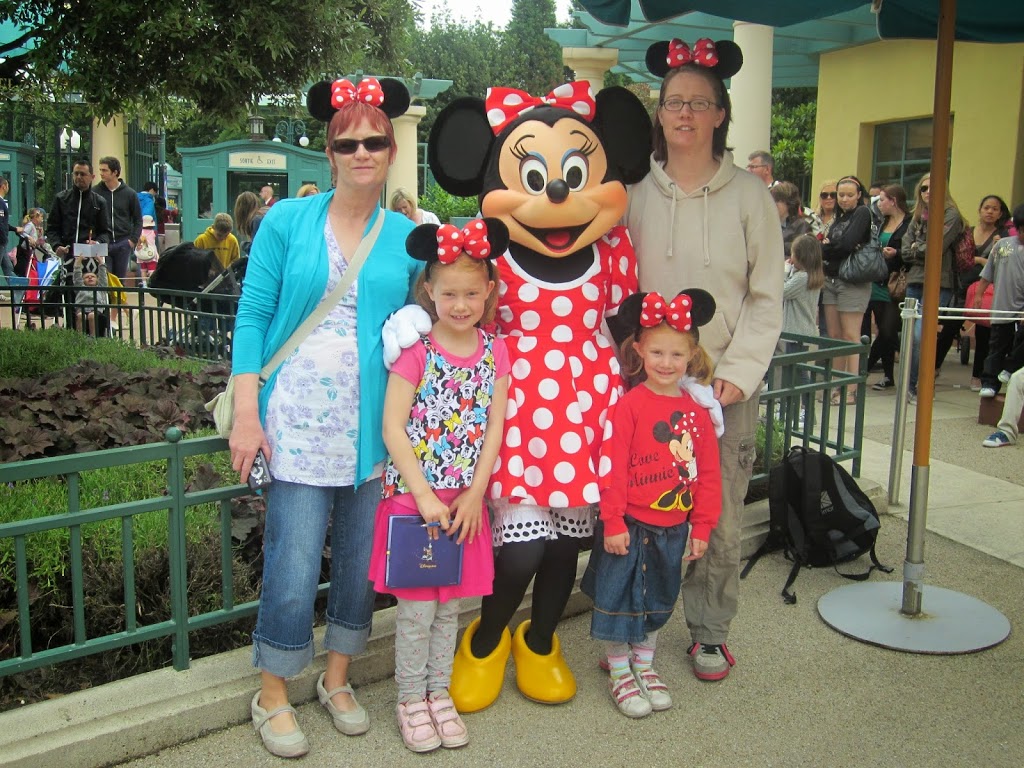 If all else fails, you can wave at your favourite characters in the daily parade.
Elsa and Ana from Frozen were a popular sight, as were Peter Pan and Tinkerbell.
The Stars in Cars parade in the Disney Studios park included Lilo and Stitch, Woody and Jessie, and Captain Hook. 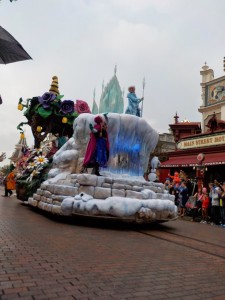 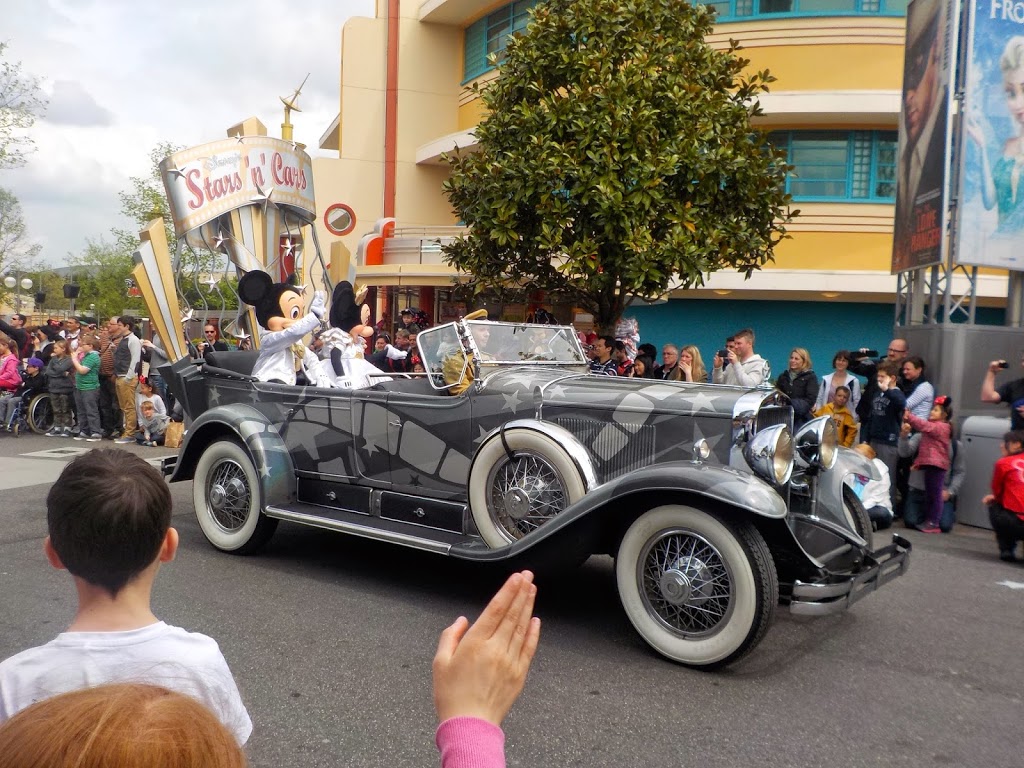 Next to City Hall in the main park, you can meet Duffy the Disney Bear. I don’t know why Disney needs any more characters, but they now have their own bear who seems popular enough.

At Cafe Mickey and Auberge De Cendrillion (Cinderella’s Place), you can eat your breakfast, lunch, or dinner in the company of a range of different characters. We didn’t do this on our visit but passing you could see there were the regulars of Goofy, Mickey, and Daisy, alongside others such as Chip and Dale, Eeyore, and Geppetto from Pinocchio.
The princess lunch is rumoured to be excellent for princess fans, if not expensive. Still, saves having to slum it in the Princess Pavilion with the rest of us peasants!
Meet Mickey Mouse
If you go the entire break and have not yet met the main mouse himself, then you can book yourself in at Meet Mickey Mouse at the back of Fantasyland. This is like the Princess Pavilion but for Mickey. You can’t leave Disneyland Paris without meeting him, so please go and visit this attraction for more information.
I can’t really think of anywhere else, but if you know of somewhere good to meet a favourite character or two, please feel free to add them below.

and The Wuss’s Guide to Rides at Disneyland Paris

5 thoughts on “Feature: Where to Meet the Characters at Disneyland Paris”