Thousands of years after the Ruthless Romans, Savage Saxons and Vicious Vikings stormed ashore on the coast of Britain and the Gruesome Greeks competed in the first ever Olympic Games, you can relive those horribly exciting times by bringing your family to see Birmingham Stage Company’s brand new Horrible Histories stage shows.

Last night, we did just that – at Hull New Theatre where the Horrible Histories stage show will be performing until Saturday 14th November. 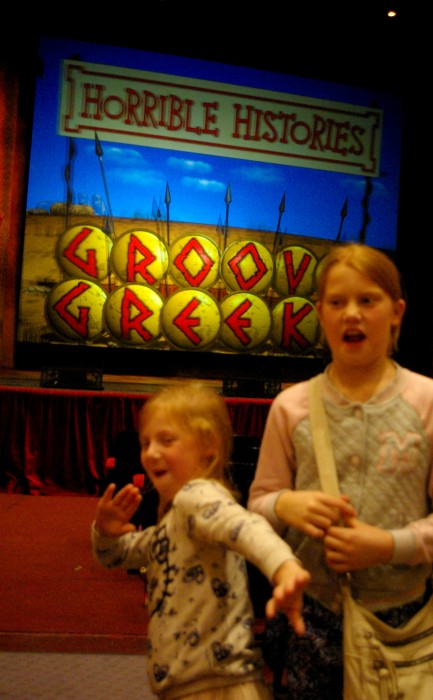 The show started at 7pm and we met a family of mum, dad, and a boy and girl who love the Horrible Histories books. They are transported to Greece and commanded by the invisible but loud and bossy Zeus to teach us all about Ancient Greece and its people.

Through only these four very hard-working actors and the omnipotent Zeus, we are taken on a journey to learn about the Trojan wars with the big wooden horse, Sparta, slave sales, Hippocrates and the birth of modern medicine, Greek theatre, democracy, philosophers, the Olympic Games, through the maze to slay the Minotaur, and to Thermopylae to defeat the Persians.

All this is done in true Horrible Histories style. The Trojans are portrayed as the Simpsons, with Marge as Helen of Troy, and Bart as Achilles. The Greek Gods of Zeus, Aphrodite, Poseidon, and Athena are introduced to us as competitors on an X-Factor style show and we have to vote for our favourite through the medium of cheering. Athena won with her brilliant R&B number.

In the second half of the show, extensive use is made of the backdrop. We are given 3D glasses to make the stage come alive with spiders, the Minotaur, and spears and arrows during the battle of Thermopylae. The 3D effects were very good but not overwhelming. If you’re not a fan of 3D you can enjoy the show just as much. The children loved the 3D effects and there were squeals of fear and excitement from all over the audience. 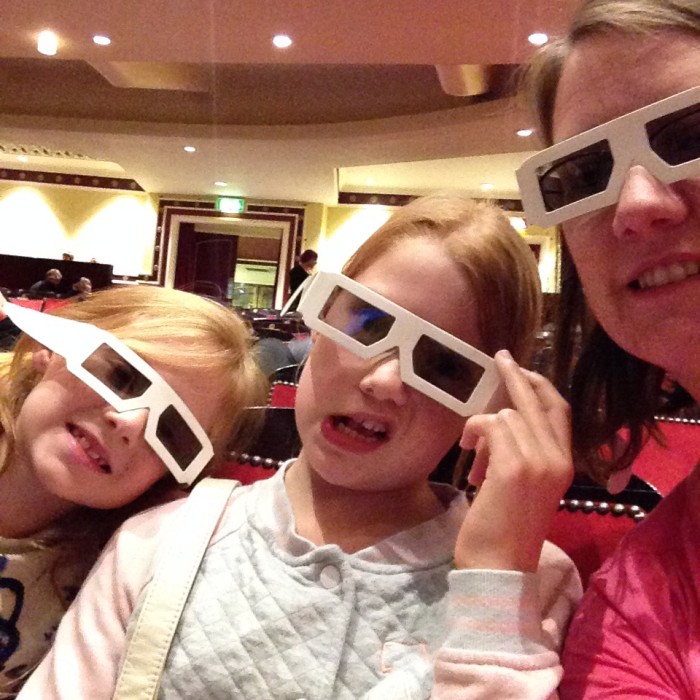 My children loved the horrible humour which Horrible Histories are known for. There are songs about bile and phlegm (which the audience are to join in with), ear-wax tasting, and naked sprinting. If you’re put off by jokes about bottoms and farts, this probably isn’t the show for you!

I have to admit I learned a fair bit about Ancient Greece last night. I loved Big Brother with Socrates, Archimedes, Pythagoras, Aristotle, and Dave the chicken, and I learned about the history of the Olympic Games.

Most of all, the show was fun. The 11yo said it was brilliant. The 8yo said it may even have been better than Basil Brush, which is quite a compliment. I don’t think very young children would enjoy it. Some of it is a bit scary, and they wouldn’t get a lot of the jokes. I think age 7 – 12 is about right, though the adults were loving it too.

The show was two hours, including a 15 minute interval. We enjoyed it thoroughly and would recommend to anyone who enjoys childish, gross humour and wants to learn something about Ancient Greece. The show is being promoted to school parties, and I can see it being brilliant for a fun and educational school trip.

Groovy Greeks is showing five times until Saturday, and the alternative Incredible Invaders is on four times at Hull New Theatre. You can buy tickets from the box office, or go online here

The national tour is on until July 2016. For more information, please visit the website of The Birmingham Stage Company