Hello! I am going to Blog On Manchester this weekend. I think it will be my fourth one. I think that means I’ve been to all of them.

Well, I couldn’t not really. Many moons ago (OK, about four years ago, maybe three) there was me and Laura in a pub. Somewhere in Manchester city centre. There was wine. That much I remember. She said she could do a blog conference and did I think anyone would come. I said that I would anyway. I said “If you build it, they will come” in some weird voice of authority. So I really had to didn’t I?

I love Blog On Manchester. It’s the only blogging conference I go to religiously. I’ve never done Britmums, and have done a couple of the Blog Camps. But being ‘ooop Norf’, and over on the Eastern side, means that all blog conferences are an ordeal. Manchester is do-able for me. It’s also a great conference with a friendly vibe and always has a lot of familiar faces.

Last year, and the year before, you will have found me on the sign-in desk. It’s always a great way to get to know who everyone is. So if you see me, please say hello. There’s a good chance I’lll know who you are already. This year I’m sure I’ll be roped in to helping with something.

So here’s my answers so you can get to know more about me.

Share a recent picture of you (if you are an anonymous blog, a drawing is fine)

Really? OK, if you must. I’m the eejit in the monster hat between Leyla and Penny on the day we went to walk with Jo Brand. 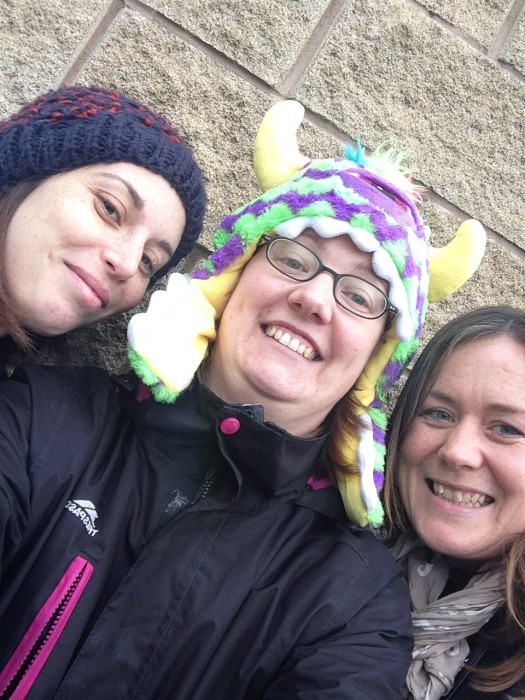 If you had to describe yourself in three words…….

How long have you been blogging and what made you start?

Since 2011. Because I wanted to share my story of being a mum of four, including twins. This travel blog was started in 2013.

What was your favourite TV program as a child?

Ooh, I don’t know. I remember a lot of King Rollo. And Care Bears.

Something interesting you might not know about me is . . .

I have a masters degree in Anthropology where I studied people who drive electric vehicles.

What is the weirdest food you have ever eaten?

Physalis was pretty weird. I imagine that’s what cherries would taste like if they were flavoured with ear wax. I’m not that daring with food to be honest.

What was your biggest fashion faux pas?

What are you pet peeves?

Who would be your 3 perfect dinner party guests (dead or alive) and why?

No idea. It’s too early for these sort of questions

If they made a movie of your life, what would it be about and which actor would play the part of you?

It would be a comedy about the perils of parenthood, with the odd surreal moment thrown in. Like Forrest Gump crossed with Cheaper by the Dozen. I could be played by Melissa McCarthy or Sarah Millican.

If you could live in any sitcom, which one would it be?

I thought I already did. In thirty years, it would be One Foot in the Grave.

Name a famous person you have met

Which social media platform best describes your personality and why?

What picture do you have on lock screen on your phone / computer?

One of the four girls that clever Uncle Ben took. He’s very good.

How many pairs of shoes do you own?

About six. I don’t know. DMs, some trainers, mock converse, two pairs of nice girly ones, and trusty black boots I wear everywhere.

What period of time from the past would you most like to have lived?

Well as the past didn’t have WiFi or computers, I’ll stick with today.

If you could travel anywhere in the world, where would you go?

As far as possible. For a travel blogger, I’m woefully under-travelled due to bad travel sickness.

What is your guilty pleasure?

None. I don’t do guilty very often.

What is your favourite tipple?

I live on full fat coke, and white wine and lemonade.

If you had a magic lamp and a Genie, what would be your three wishes

2 – An endless supply of loo roll in the house

3 – A tech which takes blog posts direct from my head and puts them on the blog, including the pictures.

See you all on Sunday!