Jorvik Viking Centre tells the story of the Viking history of York, and is somewhere we visited a couple of times as children. Superbreak gave us some tickets so we could take our own children and see what had changed in the last twenty or so years.

Jorvik Viking Centre is one of York’s best known museums. It is located on Coppergate, close to Cliffords Tower and York City Centre. 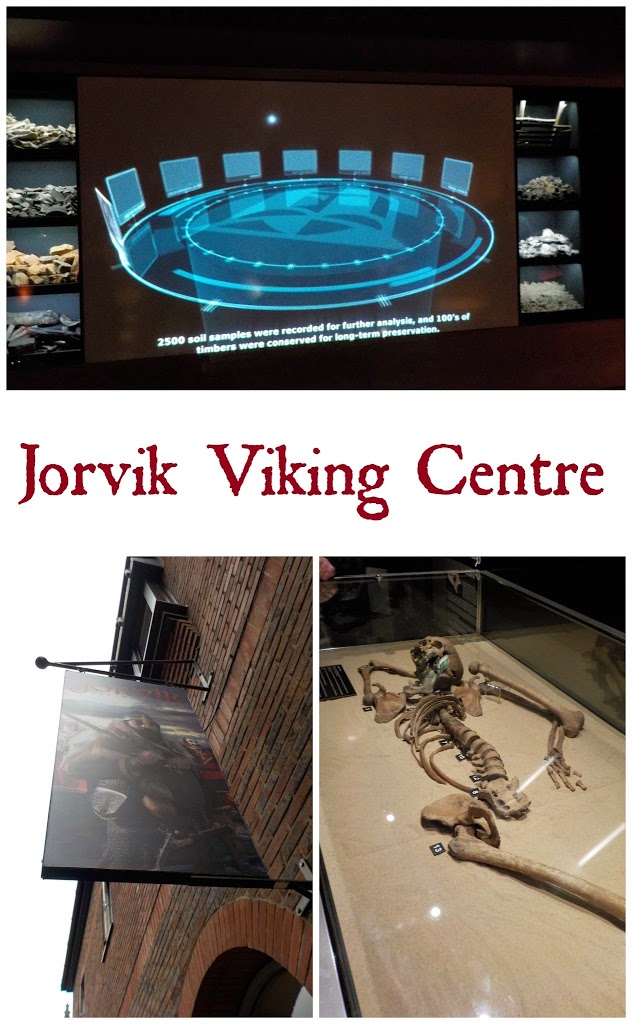 It’s not huge – it only took us an hour at most to get around – and is most suitable for children aged from 8 to 14. It was busy, and we found it hard work with fractious three-year olds who couldn’t see a lot of the exhibits.

There is a lift for wheelchairs and prams to the basement level where the main exhibition is located. There is a pram park and toilets at basement level, but not enough for the number of visitors.

The first part of the exhibition is a glass floor over the Viking remains which prompted the building of the museum from 1976 when they were found below an old factory on Coppergate. There are lots of boards and touch screens telling you about Viking life, and their settlement in York.

Excuse the photos! The whole venue is low-lit to preserve the exhibits, and my camera is good, but not that good.

After that is the part I most remember from childhood – the carriage ride around a recreation of a Viking settlement. Except now the carriages and rails have been replaced by six-seater carriages which hang from an overhead rail, and rotate. We fit nicely into a six-seater, with two adults and the unruliest three-year old in the back, and three children in the front.


Each seat has its own speaker system which work independently of the other five. You can set your own audio, including English, a child-friendly English, Japanese, and German. It’s a bit awkward if you all choose different ones as you can hear your neighbours as well as your own. The smaller children couldn’t hear theirs as their ears didn’t reach the speakers. But we got by. Mainly by one of the three-year olds asking “What’s that?” at every thing we saw, and the nine-year old trying to answer her as best she could.

You’re not allowed to take photos in this bit so I’ll do my best. The ride is basically fifteen minutes on a slow-moving carriage past realistic, Danish-speaking, moving models of Vikings in settings such as Ye Olde Coppergate, and inside their homes. There are Viking boats, Vikings working gutting fish, and even a Viking on a ye olde lavatory. The smells are also there, adding to the realism. The girls really enjoyed this bit and wanted to go on again. Sadly, you’re not allowed. You have to get off and continue through the exhibition.

Next are displays of actual Viking artefacts, such as skeletons, coins, and a genuine piece of poo, which apparently is in the Guinness Book of Records (poo photo warning!). 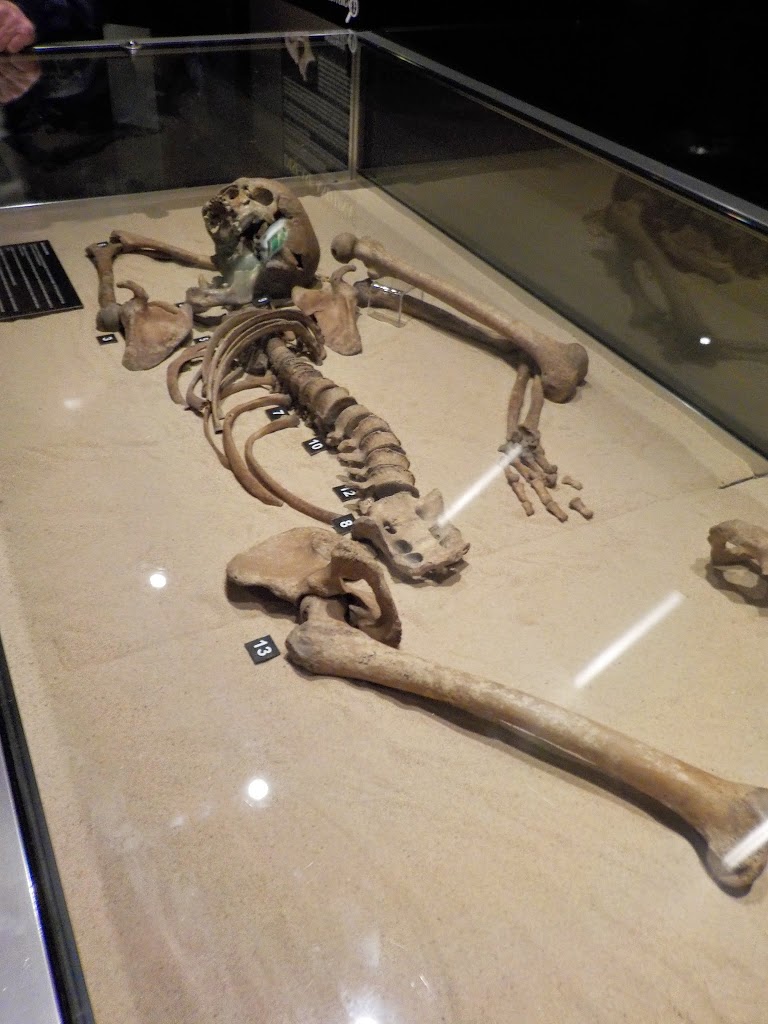 We spoke to one of the curators/actors who showed us actual samples of Viking leather and wool, and explained to us how they would have dyed the wool. The nine-year old was fascinated by this but you could tell they were desperate to have a prod and a poke. 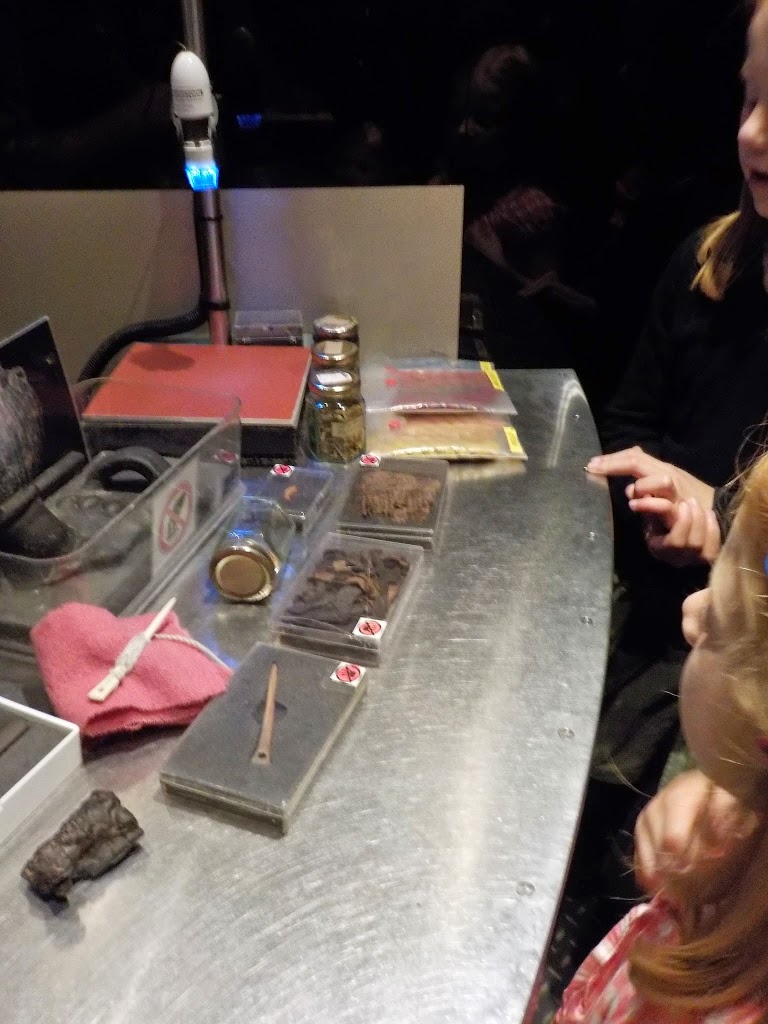 After this, there are lots more exhibits of weapons, and tools, and all sorts of Viking paraphernalia, but it was too busy for us to be able to look at much, and the three-year olds were getting a bit restless.

That’s it really. Back upstairs/lift and exit through the gift shop.

Our verdict – it was ok. We were surprised at how little time it took. The three-year olds didn’t help. You’d probably spend longer in here if you have little people who are interested in Vikings and looking at artefacts.

Family-friendly? – not too shabby, but scarcity of toilets and small people not being able to see very much, or poke anything proved to create boredom in the pre-schoolers. The steps for entry and exit don’t help, and you have to abandon the pram to get round. Too busy really to let younger ones loose.

Good points – the queue to get in was short at around 15/20 minutes – they LOVED the Viking ride, and the entrance ticket is now valid for a whole twelve months!