Before I begin, this is my 200th post! I know, amazing right? *miniature fanfare*. We’ve had a lot of fun exploring the UK and all of its family fun delights, and this week has been no exception. 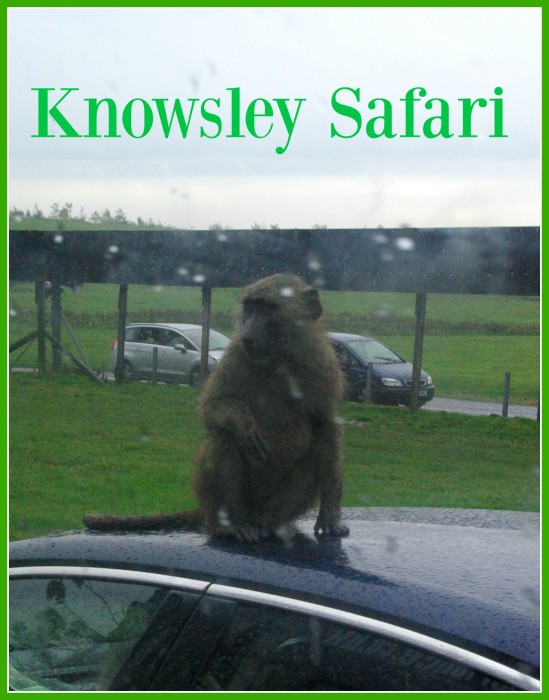 Knowsley Safari is a park covering over 500 acres to the East of Liverpool, which opened in the 1970s and attracts thousands of visitors every year. The baboons have a reputation for being very cheeky, and we were looking forward to the safari drive very much.

We arrived as the park opened at 10am but there wasn’t much going on really. Not everything was open, but we did get chance to have an exclusive look at the sea lions and the birds in the aviary while there was no-one else around. 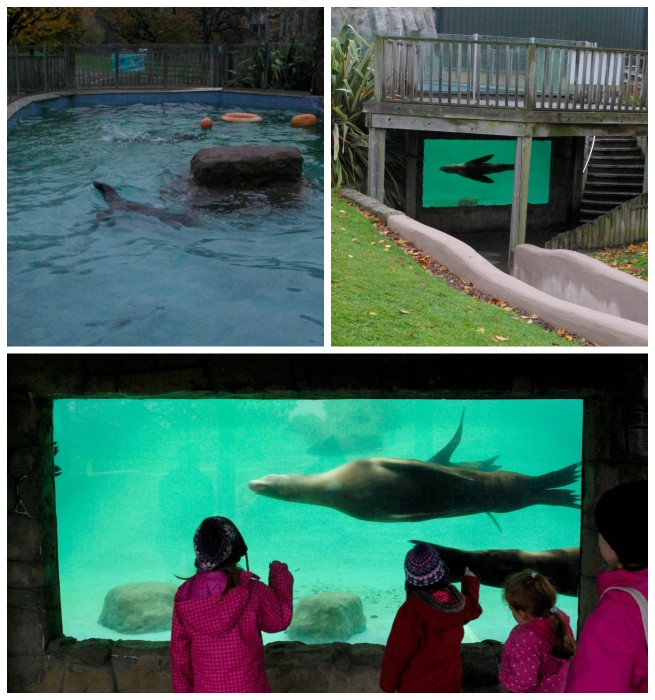 We had a little walk about and visited the loos ready for our trip aboard the Baboon Bus. The Baboon Bus costs a little extra on top of your entrance fee and has to be pre-booked. We were on the first bus of the day at 11am and it was full.The bus is recommended if, like me, you like to take photos and also turn out to be your group’s driver. It’s also good if you have a large group and want to travel round together. The bus holds around 40 people and it was full on our trip.

The Baboon bus is also highly recommended if you want to experience all the highs of the baboon enclosure (baboons jumping on your roof and climbing up the windscreen wipers) without any of the lows (potentially losing a windscreen wiper, a number plate, or more). If you’ve been through the baboon enclosures at other safari parks such as Longleat or Woburn, they are mere amateurs compared to the Knowsley crew.

Our bus was on time, comfy and everyone got a seat. Our driver explained a few safety things to us, and we got on our way. The driver was very good at pointing animals out and he also told us some educational and informative things about them too, such as why rhinos poo in the same places! 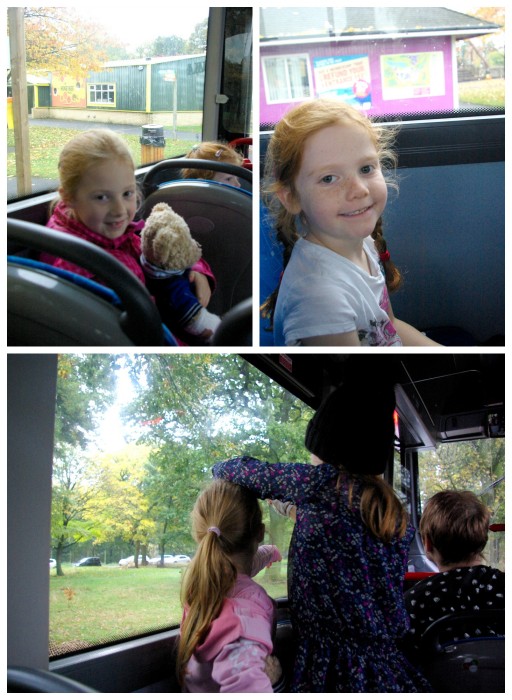 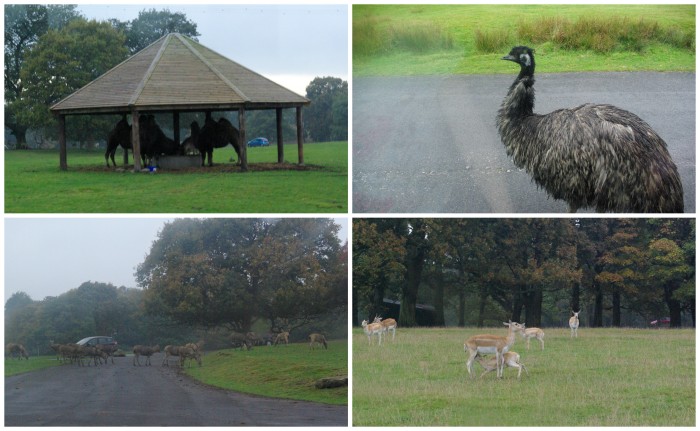 We got to see some lions – both female and male – quite close. The drizzly weather meant that they were not hiding away in the long grass like they sometimes do when it’s sunny. You drove around the lion enclosure in a loop so you could see them from a couple of angles. 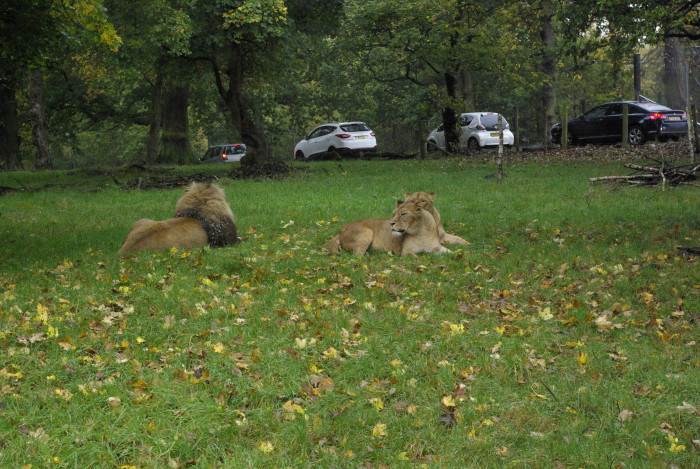 I was also very impressed with the rhino herd, which is the best I’ve seen. They came quite close to the bus and we could get a very good view of them. 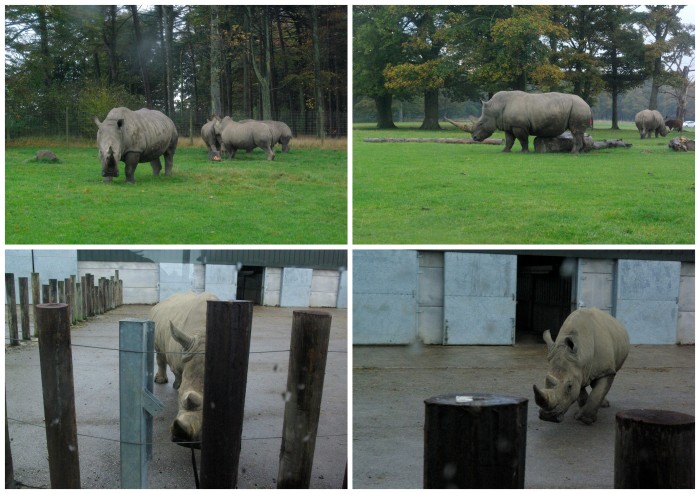 But the best bit had to be the baboons. After trips to other safari parks, the girls were very excited and couldn’t wait to get there. The bus handily had ropes attached to the sides and back of the bus to encourage the baboons to play, not that they needed it. Knowsley Safari have a collection of 240 baboons of all sizes and they were very active. They busied themselves car-surfing and trying to build up their extensive collection of car parts. The keepers were very on the ball though, collecting up stray items such as number plates and seeing they got back to their owners. 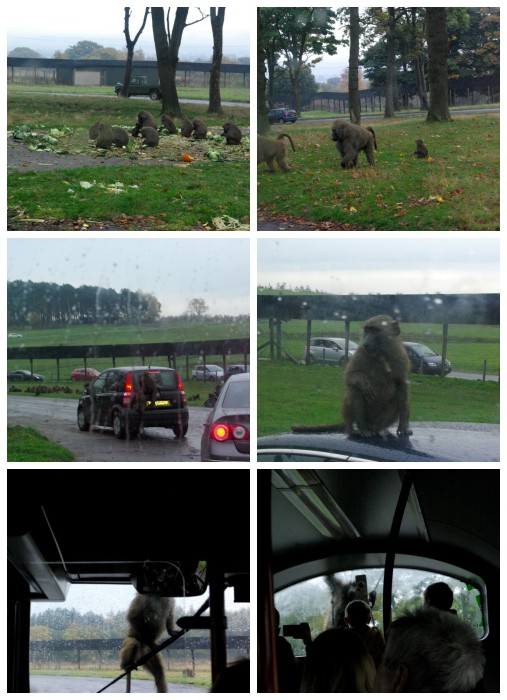 Thank you to the baboons that obligingly visited the bus and made my girls’ day. Such fun!

You can bypass the baboon enclosure if you want and watch from relative safety through a fence, but where’s the fun in that?

The bus took an hour and fifteen minutes to get around the drive, and was faster than a car I suspect as the driver knew where the best places were to see the animals and could bypass the more sparse areas.

The end of the tour and the girls wanted to do it all again, but I said we’d look around the rest of the park and maybe come back in the car later – the last entrance to the safari drive was at 3:30pm.

The first stop back in the main park was the Sea Lion show, and I have to say it’s probably the best one we’ve seen – all the usual things were there – ball balancing, jumping for fish, and seal impressions, but it was done very well and the stage was excellent. The younger two girls especially loved this show, and the 8 year old said it was “awesome”. 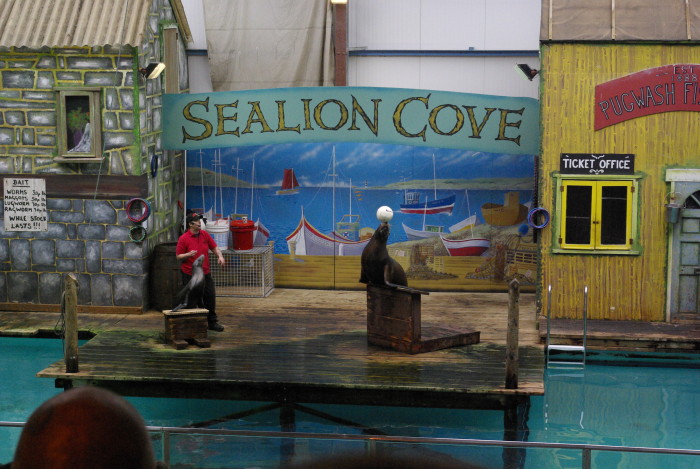 After the show, we visited the cafe for lunch. The restaurant was rammed, so we went to the coffee shop next door which sold a selection of sandwiches and drinks, and lunchboxes for the children. It was the usual quality and value you’d expect in a major attraction. We easily found a table in this bit, and they took the money off voucher you may find on your map (top tip!). The animal masks come in your lunchbox. 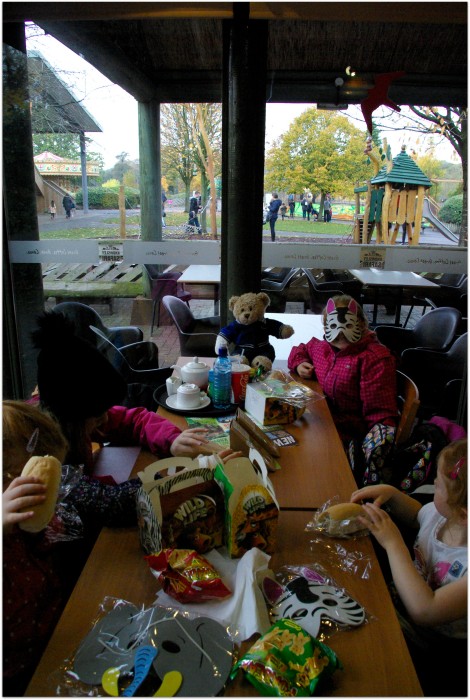 The next stop was the bat house, which is great. If you like bats. You walk through in semi-darkness while the bats fly around you. This part is not for the faint-hearted. No co-incidence that this photo was taken from the outside then. Grandma and a couple of my children enjoyed it immensely. Another was not too sure. 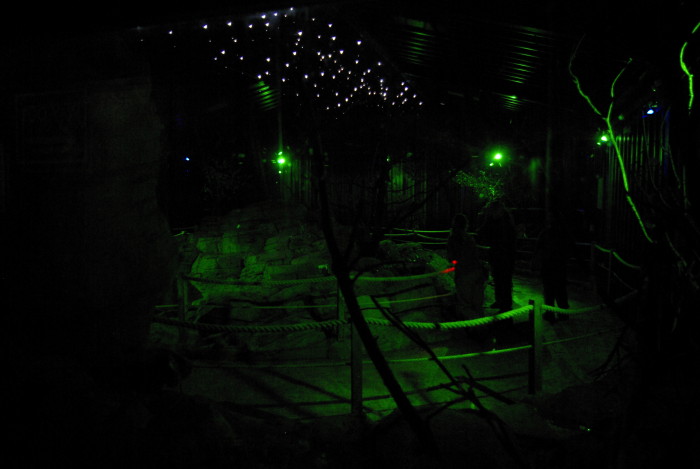 Another highlight was the bird flying show. Graham the handler showed us an array of birds including a bald eagle, an owl, some vultures, and a flock of storks. They flew down low over our heads and we had to duck. The birds were really well-trained and (mostly) well-behaved. We were amazed at how Graham had trained storks, as we’d never seen them in a bird show before. After the show we went to meet and have a photo taken with a much larger, cuddlier bird. 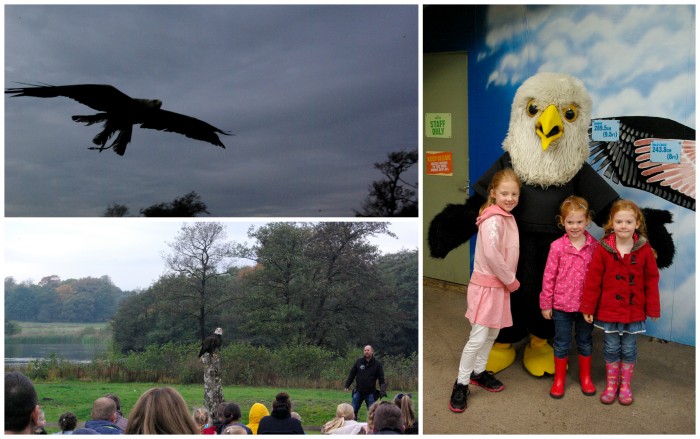 The last bit of the park we did was more animals, including the requisite meerkats, which we all adore. 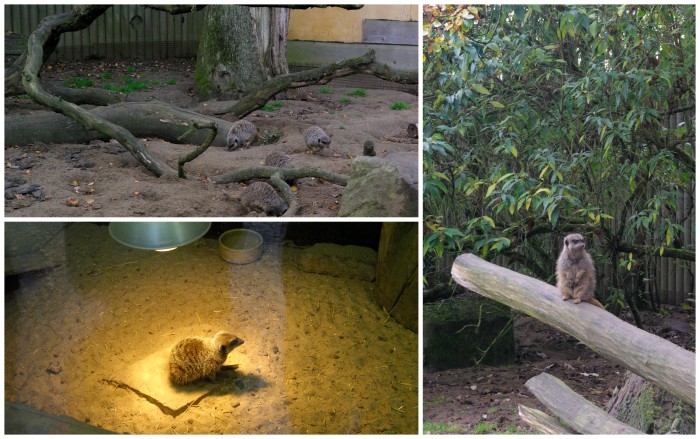 We also saw water hogs (like Pumbaa) and more deer, and some very lovely capybara. We walked around to get a better look at the elephants and giraffes we’d seen at the end of the safari drive. 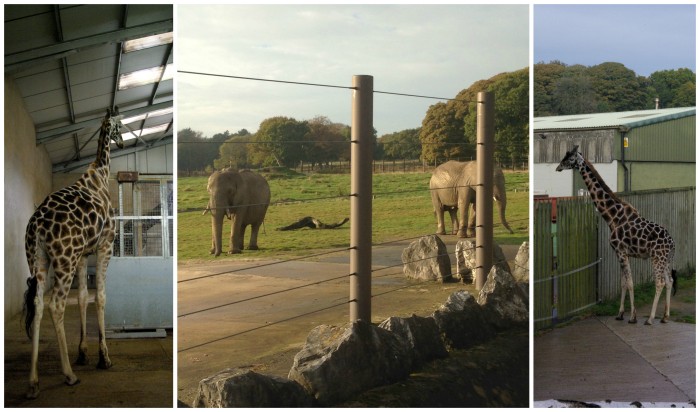 There were lots of other things to do, such as fairground rides (which were an extra charge if you wanted to do them),  woodland walk, a train ride (again, extra charge), and some outdoor play equipment and a sandpit. These were wet on the day of our visit as it had been raining, but they’d dried up enough to have a little turn on them later. 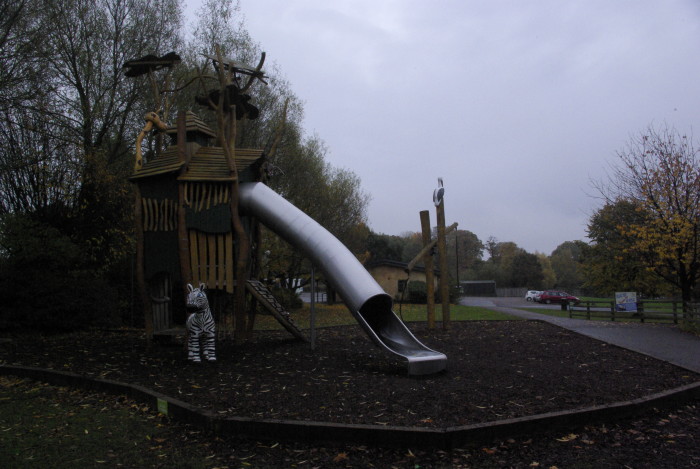 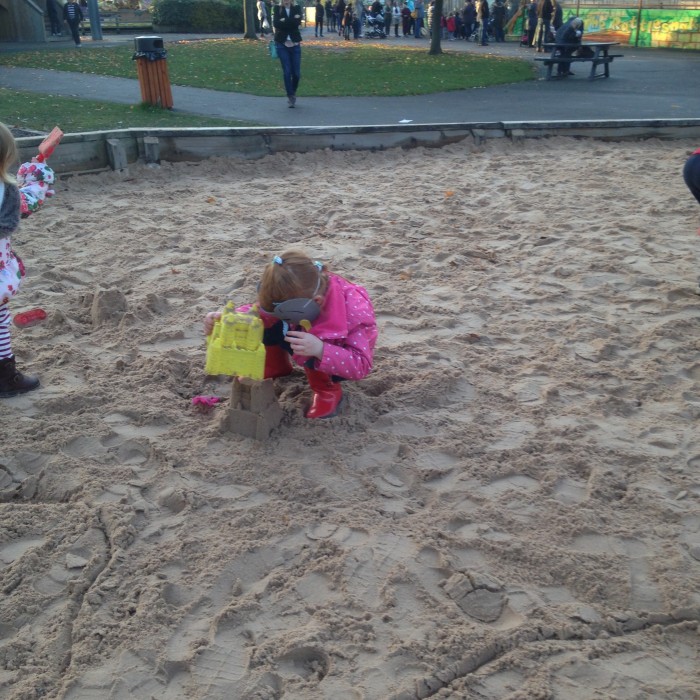 It was quite good going in October half-term. It rained on the day of our visit but there was enough to do inside and the ground wasn’t boggy to walk on. Of course, you’re under cover for the main safari drive, but also for the Sea Lion show, and there is an indoor area for the bird flying show if it gets too bad.

The bug house was closed for refurbishment but everything else was open as usual. The park opening hours are shorter due to darker evenings, but I imagine it’s less busy than if you came in the summer season.

Trip length – six hours including lunch. We didn’t do the fairground rides or the woodland walk and there was plenty to do in the time we were there.