Lightwater Valley near Ripon in North Yorkshire has been operating as a theme park since the 1980s and is somewhere I remember going as a child, though I don’t remember too much about it!

These days it is a huge 175 acre site and incorporates a shopping village and a bird of prey centre. It has over 40 rides and attractions and is home to Europe’s longest roller coaster – The Ultimate. More recently, it has opened a brand new Angry Birds play area.

We decided to visit on the last Friday of the summer holidays, and we’re really glad we did. 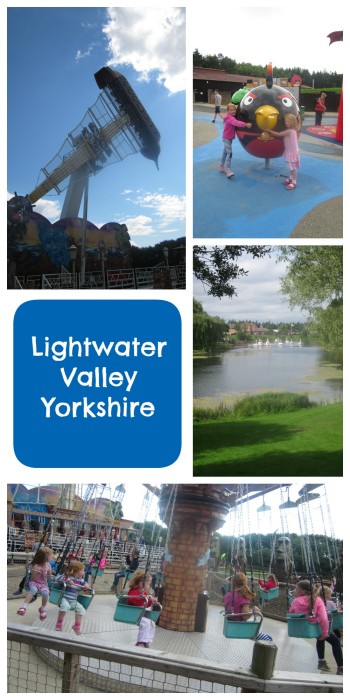 We got there just after 10am (when it opens). Car parking is free, easy and marshalled. The queue for the ticket booth was pretty short.
In and we went straight to the Angry Birds play area. The children were very impressed. It was challenging enough for the nine-year olds, and safe enough for the two-year olds. Brilliant! There are slides, firemans poles, monkey bars, spinny things, and bridges. 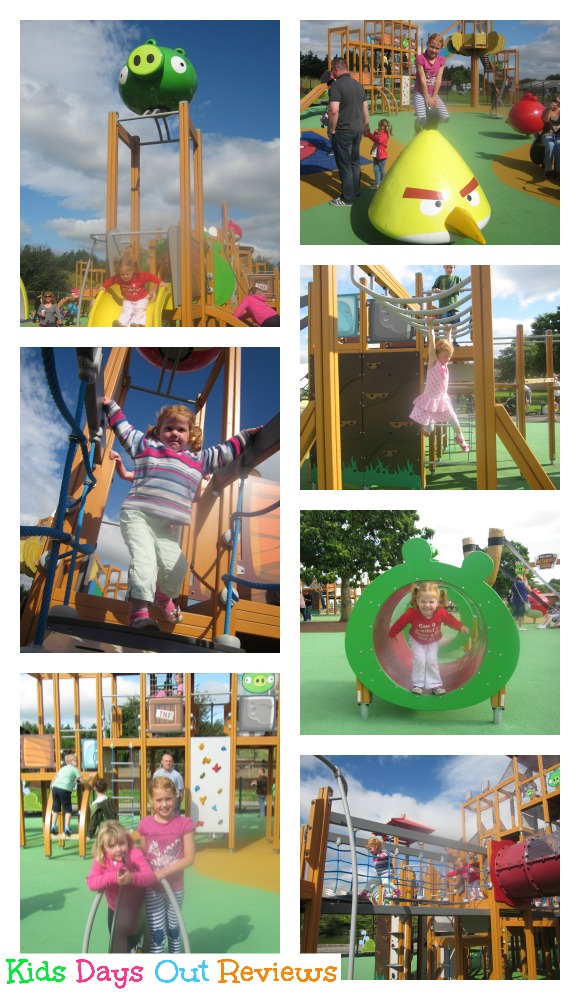 There is also an indoor part, Angry Birds in Space, which is great for if it rains, though it’s much smaller than the outdoor area. 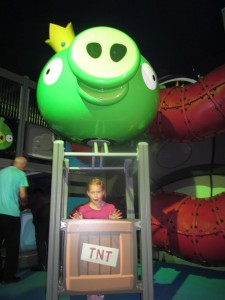 The rides in the park are spread over several different zones and there are large rides and small rides in each. This was quite good for us as we had ten people in our group – aged 2, 4, 5, 9, and adults. It meant some of the adults could go on the bigger rides while other adults put the littlies on the small rides to keep them entertained. We didn’t spend a lot of time waiting around for other people to ride.
The little rides included…..tea cups, an octopus, a pirate boat, dragon boats, a mini big wheel (which was a bit lame to be honest), and our faves – the ladybirds! 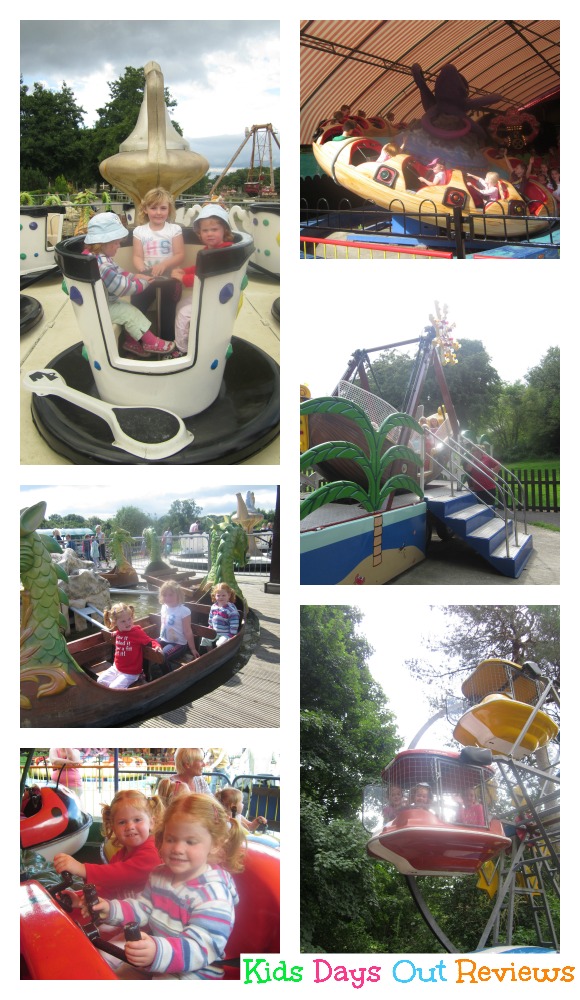 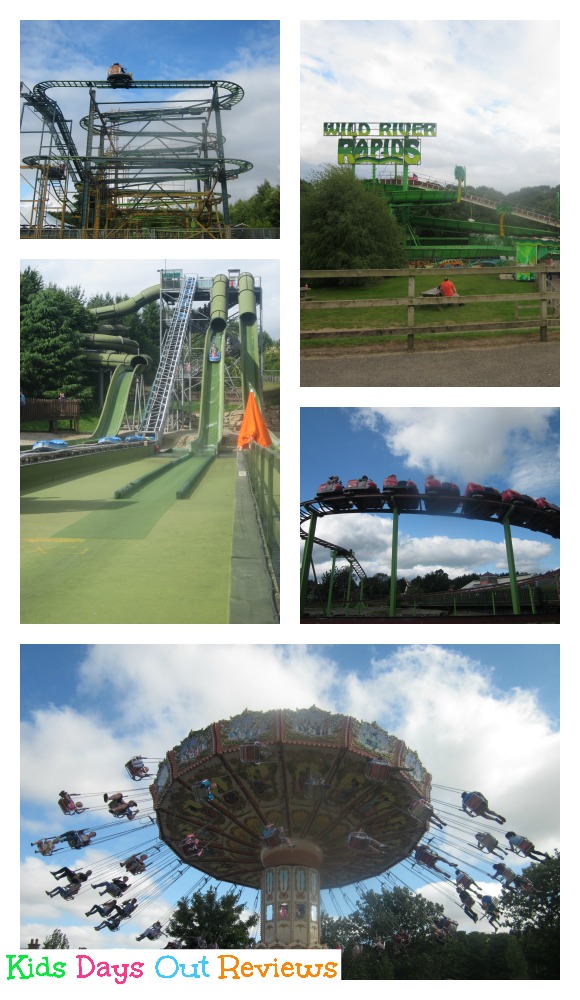 All rides have height restrictions and are checked on ride entry. There is a board at the main entrance so you can check your height against each ride before you go in.
There wasn’t much that we wanted to go on where we didn’t meet the height restrictions, though often one of us adults had to accompany the five-year-old who was just short of being able to go on some things on her own. But we didn’t mind at all. More rides for us adults! The nine-year olds could go on most things, including The Ultimate, which they did! Mad people.
The Ultimate is the longest roller coaster in Europe and consists of a couple of big drops and then lots of bends. No photos as it’s too big and I kindly let the other adults in the group accompany the children on this one. Yep, I’m all heart. We left this until late in the day (the park was open until 6pm on the day of our visit, though this can change so check with the park before you go) and they waited less than half an hour to go on, which is brilliant for a big ride, I think.
Anyway, earlier we visited the pirate area, and went on a few rides there. Our adult friends went on this….needless to say, I didn’t! 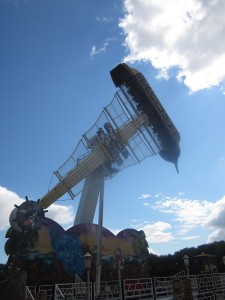 My five-year old’s favourite ride was the ladybird roller coaster. She went on it three times. She has perfected the art of getting off the ride asap and running round from the exit back to the entrance again to get on the next one.
The two year olds liked the farm tractors and the sand play area. There is also a cool skate-kart track which is suitable for adults too. The adults on it seemed to be having more fun than the children. 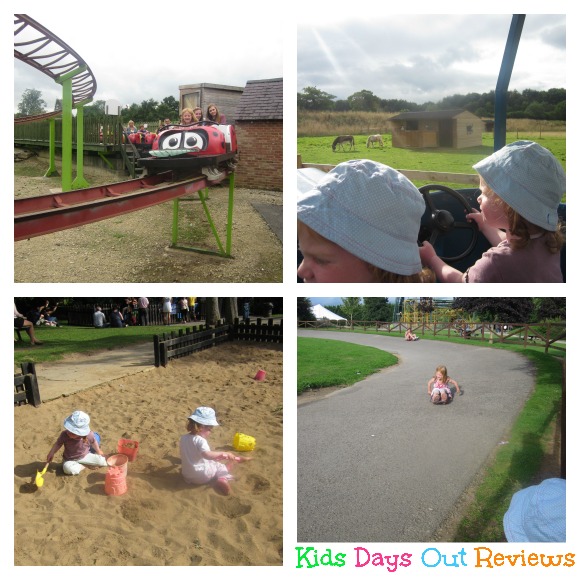 Lightwater Valley is home to birds of prey as well as rides. You can have your photo taken with one for £3.95. It’s ready instantly and they’re not a bad size or quality for the money.
There are shows at the bird of prey centre, where you get to see birds in flight, including an owl and a falcon. They get really close. One of the birds was very naughty and kept flying off and not doing as it was told, which the children thought was hilarious.
In the centre, there is also a small animal display with ferrets, rabbits, and snakes. This is all included in the park entrance fee. 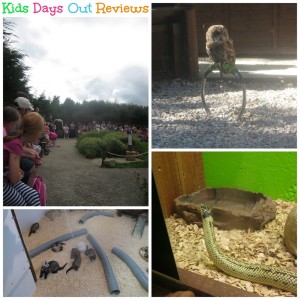 One of our favourite rides was the carousel. We managed to grab an extra cheeky turn on it on the way out when everyone else was leaving. The two year olds were too small to be allowed a horse but they were excited to sit in a carriage instead. 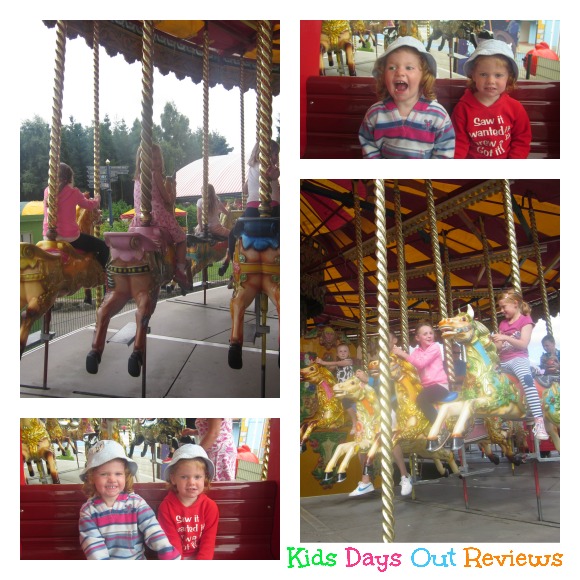 The food was the usual theme park arrangement – overpriced and not that great quality. The portion sizes were quite small too. I think the food could be improved immensely, as could the eating areas, particularly in the Hungry Harbour where we could only get tables of four – not much good when there is six of us (as there usually is), or ten which we had with us on the day. There is, however, plenty of places to eat a picnic, which I heartily recommend. The do-nuts in the ice-cream stand were lovely!
The toilets were the biggest pain for us. There just weren’t enough of them – spread apart, and big queues when you got there. Not much fun when you have small children who just can’t wait that long. But we only had one accident all day, which is pretty good for recently toilet trained toddlers. Baby changing was available at the toilet points.
Entrance fee is on a par with other theme parks, and is priced according to height. Over 1.3m pay the most. Under 1.0m in height pay £5 on the door, or £4 online, which is fab. There is quite a lot for under 1.0m children to go on for this price. Babies in pushchairs who don’t want to go on any rides are free. You can also upgrade to an ‘Ultimate’ ticket which includes food and some fast pass tickets.
Overall, we had a really fun day, and one which was as good for the adults as well as the toddlers. We will be back!
Tips –
Get there early and leave late – the park is open from 10am, and closes anywhere between 4.30pm and 6pm depending on the day. Check before you leave.
If there are queues for the big rides, come back later in the day when the park gets quieter.
Use the map. The park layout isn’t the best and the map will help you find the rides you want to go on.
You can buy tickets for Lightwater Valley at Attractiontix
Look out for special offers in the national press. You can also exchange Tesco Clubcard points for vouchers (currently £1 of Clubcard vouchers for £4 worth of Lightwater Valley tickets). They also accept Love2Shop vouchers. (only exchangeable for ‘on the day’ tickets, not on online advance bookings).
Tickets are cheaper if you book online.
Take a picnic.
Enjoy!
For more information please visit their website – Lightwater Valley

Disclosure – we were given a family ticket towards the cost of our visit.