On Sunday 8th March, myself and mini-me headed over to Wembley Arena for the first ever Red Nose Day Danceathon in support of Comic Relief. We were part of a group of other bloggers, friends, and family collectively known as #TeamHonk. We numbered almost 100 in a 2,000 strong crowd, plus various supporters.

The event was a six-hour long danceathon presented by Claudia Winkleman and featuring celebs such as Rachel Riley, Jessica Hynes, Marcus Brigstocke and the legendary Rufus Hound. There were 12 different dance styles, each led by a pro-dancer or coreographer, with little more than a minute or two’s break in between each half-hour session. It was beamed live through the BBC Red Button, and several thousand people were dancing along or just watching from the comfort of their living room, on top of thousands of others who’d organised their own danceathon, such as my friend Katie’s dance school in East Yorkshire.

Once we were inside – par the usual big event confusions and communication balls-ups – we found the rest of #TeamHonk. Mini-me and I had to go in the under 16s area away from the rest of the team, and I was upset about this as it was not was I was expecting from the wording on the website, so I was relieved to find a couple of other honkers with their under 16s to dance along with.

The dancing kicked off exactly on time at 12 noon, right after a little warm-up and an opportunity for the production team to sort out the inevitable technical hiccups. The first session was 70s disco, and it was fab! We followed the choreographer to such classics as Dancing in September and the YMCA, during which the entire crowd knew exactly what to do at the chorus. This song gave me my favourite pic of the day. Huge wave to Penny of Parentshaped

#teamhonk does the YMCA #Danceathon

The sessions continued, with 80s, Diva, Swag, 90s rave (which was my fave), and something called Bashment which was unfamiliar but was basically West Indian style dancing to Pass the Dutchie and various other reggae-style tunes.

We did two loo stops and drank A LOT of water. Mini-Me lost a bit of enthusiasm and energy during some of the sessions, which I think was due to not really knowing many of the songs. She perked up a lot when Little Mix came on during the pop session (or it could have been Diva – lots of the day went by in a blur). 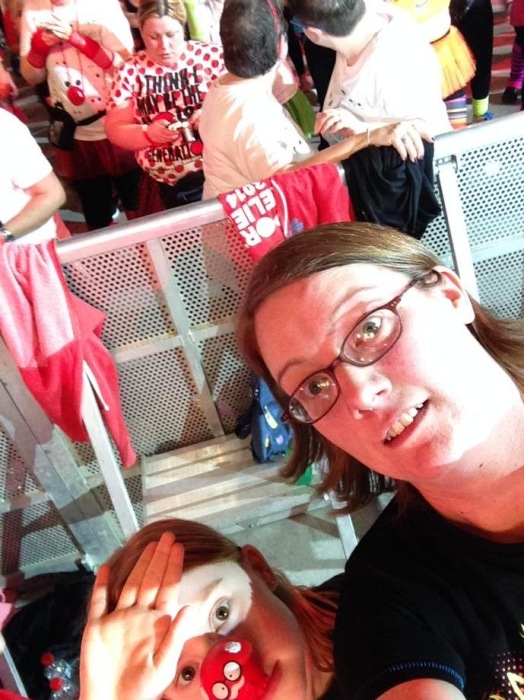 Looking hot – as in like a tomato – after six hours of dancing! 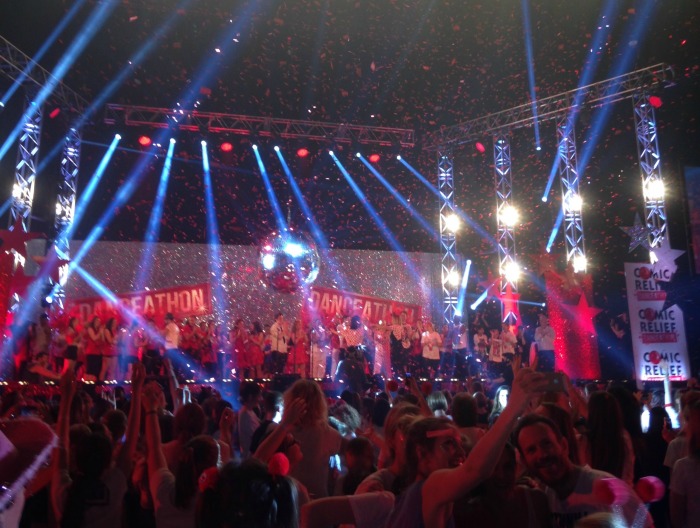 After twelve sessions, we were done! Six hours had gone by very quickly. It was a lot of fun. Do I hurt? Yes, a little. My toenails felt like they were bruised but they seem to be ok now. Drinking a lot of water helped somewhat, though I was too sleepy to drive back home to Yorkshire as planned after the event. I was a bit sore the next morning, but nothing too bad.

Between myself and mini-me, we had raised £150 each before the event, and each got another £25 each on the day. Our totals are still going up, as we have some sponsorship in cash to pay in still from some lovely people at Dad’s work.

#TeamHonk have raised a huge £30,000 and rising from between the 100 of us, which is amazing! My friend Katie’s school has raised over £1,000. All this money will go to Comic Relief, who support some wonderful causes both here in the UK and in Africa.

If you’d like to sponsor our efforts, please sponsor Mini-me here >> http://my.rednoseday.com/sponsor/MeredithBrady 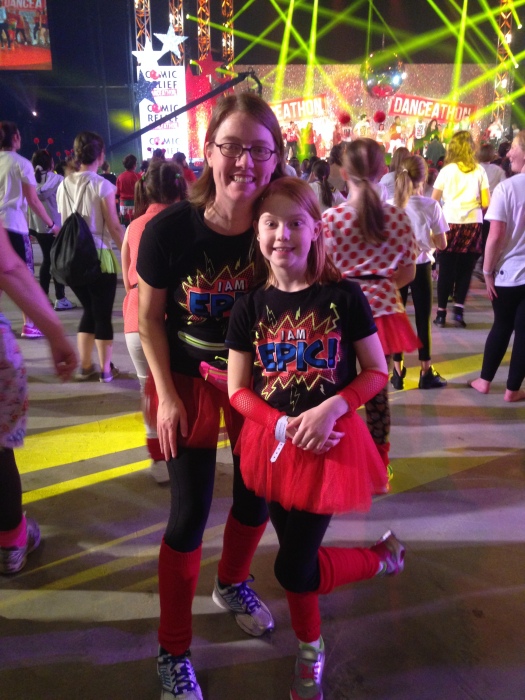 A MASSIVE THANK YOU to everyone who has donated, shared our updates, and honked us on. We love you all.

One thought on “The Red Nose Day Danceathon”