I know it’s still November but we’re feeling all Christmassy already here and are excited about the prospect of a snowy winter this year after a couple of dry years. When Chill Factor-e in Manchester invited us to go and try out their indoor Snow Park with a visit to Santa thrown in we jumped at the chance. 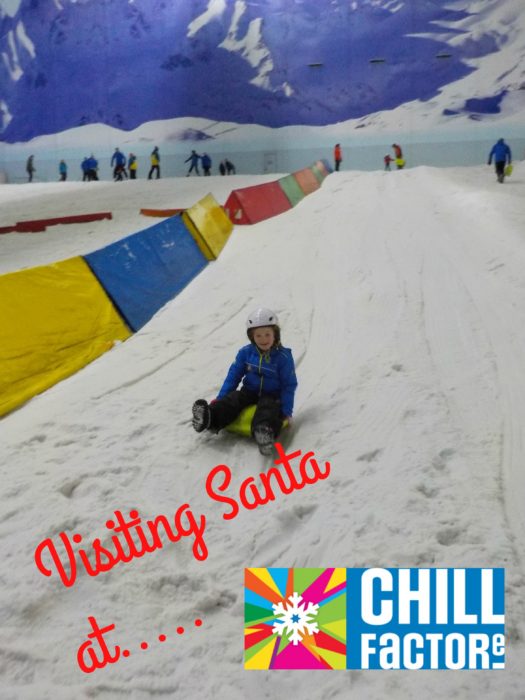 Chill Factore is a huge indoor ski and snow centre just next to the Trafford Centre in Manchester. It is the biggest indoor snow centre I’ve seen. They do a range of activities from toddler snow play sessions in Mini Moose Land, through skiing lessons, and up to full ski and snowboard sessions.

Currently, they also have Santa in residence every weekend in November and every day in December, and are offering Santa visits combined with a session in Mini Moose Land (for under 4s) or the Snow Park (over 4s and adults).

Our visit started in the changing village where we got all our clothing we needed for the Snow Park. You will need to allow at least 30 minutes for this, more on a busy day. You need to acquire a pair of trousers and a padded jacket, and then a helmet and snow boots. Lockers are plentiful and cost £1 which is refundable. 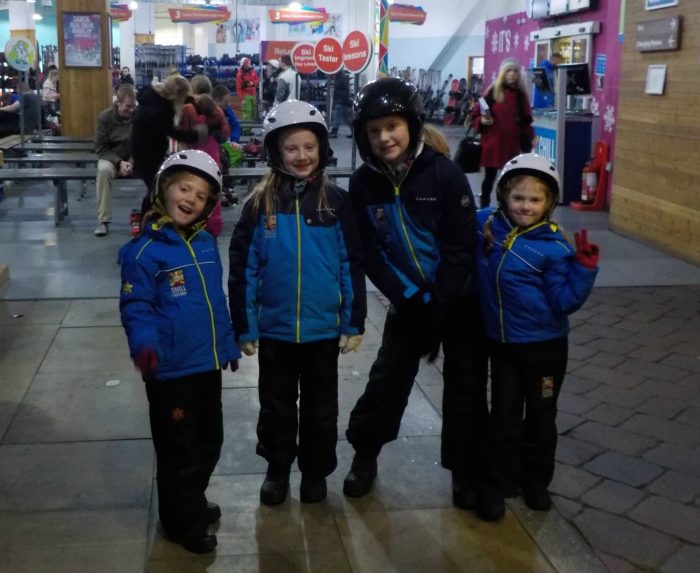 Then we headed over to see Santa. Your ticket is for a timed slot for your visit to Santa’s Grotto, and once you’ve finished you put your pressie in your locker, and head back to the changing village to join the group for entry in to the Snow Park – which happens every 15 minutes.

The queue to see Santa was non-existent, so we got to the front immediatey and chatted to the elf for a couple of minutes while waiting for Santa to be ready. The elf sent us down the snowy path to Santa’s Grotto, where we had to knock on the door three times, and a very bouncy elf let us in to see Santa.

Santa was very nice – though the younger children were not convinced this one was the real Santa. Because we get to see several Santas on the run-up to Christmas, the children understand that nice people help a very busy Santa by pretending to be him for the littlest children. They know that sometimes the real Santa does pop up though so you need to be extra nice, just in case! They liked this Santa a lot but are pretty certain this one wasn’t the real one. 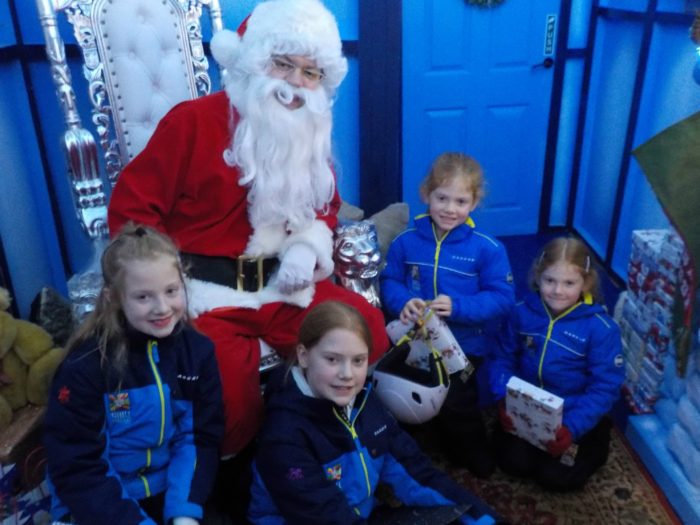 He asked them their names and what they wanted for Christmas. He asked if they’d been good, to which of course, they answered a resounding “yes!”. You can purchase your Santa photo on the way out. You can just turn up and pay to see Santa if that’s all you want to do, and it is a good grotto in itself with a wonderful festive look.

Gifts were art books for the older girls – one got one about drawing animals, and the other about dinosaurs – and jigsaws for the five-year olds. The presents are recommended for children aged up to about 9 years old, which I think is about right. The 12 year old enjoyed her visit to Santa with her younger sisters anyway, and she liked the book even if it is a little young for her now. Never too old for a present from Santa! 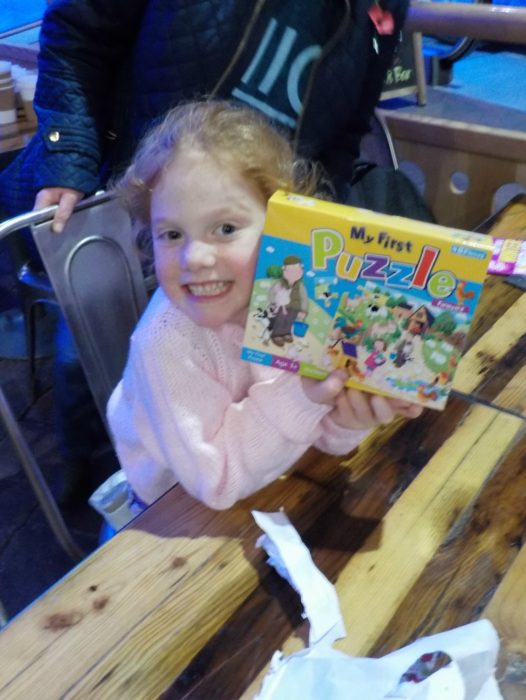 They happily received their gifts with thanks, and we waved goodbye and headed over to the changing village to wait for our turn in the Snow Park. 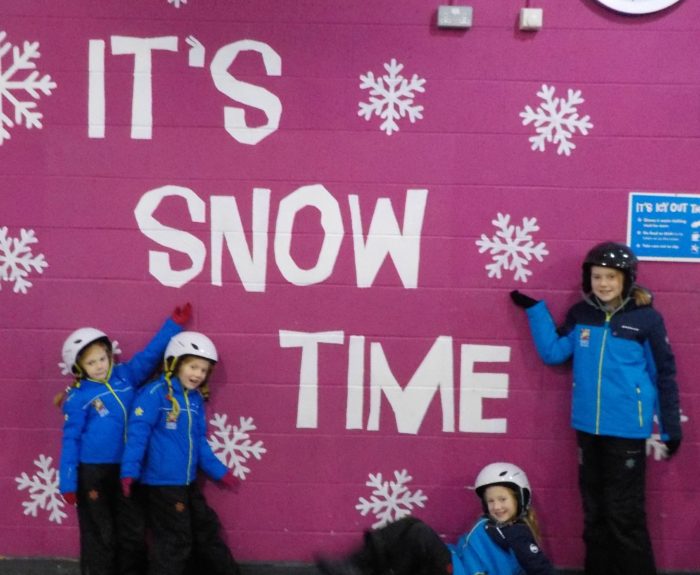 After only a few minutes, the guide came to lead us in, and to explain the safety rules. Then we were let loose!

The Snow Park at Chill Factore

There are three things to choose from in the Snow Park, and all of them a lot of fun. We headed straight for the Downhill Donuts, which was three slides – one straight, and two bumpy – on inflatable rings. Great fun for children and adults alike. When it was busy we had to queue for a ring, ride the travellator (which is a real boon as it saves your legs climbing up in snow), and then queue at the top for our turn. However, at one point, the twins had the ride to themselves and kept going round and round until they were worn out. Which is basically never.

The next ride is the Luge Slip n Slide, which is exactly what it sounds like – a luge ride. I didn’t go on this as it looked a bit fast for my liking. The 12 year old and the deathwish 9-year old loved it. At one point, they had this ride to themselves too!

The last ride is Sledge-o-Mania. For this, you grab a little sledge, trudge up the hill, and then sledge down again – simple! This was popular with the twins, who are five years old, and with me, as it wasn’t so fast that I scared myself.

After about an hour, the younger ones started getting a bit cold – it’s real snow, you know – so we headed out to get changed and back into the warm. We left the 12 year old in there for a bit while we got some food ordered.

There are a few food outlets at Chill Factore. We were invited to try out Pizza Dalla Piste, which we did! 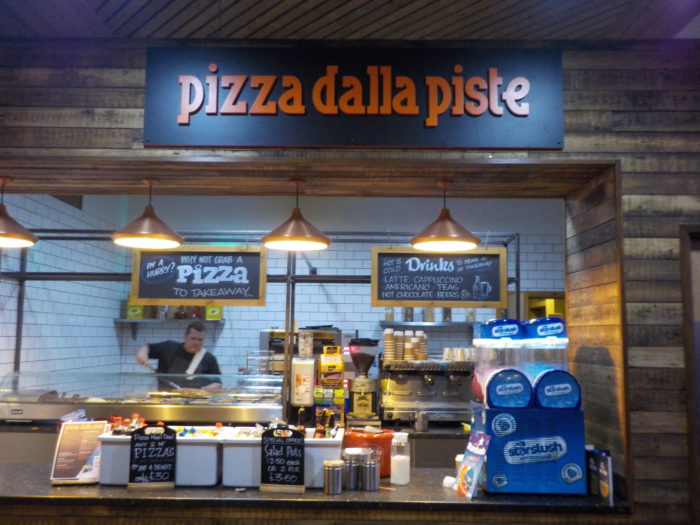 We chose the family meal deal – which is two large pizzas, a garlic bread, and four drinks for £30. It was the perfect size for us – 2 adults, and four children aged from 12 to 5. It might not be quite enough if your children are food-monsters, but it did us. you can also buy an extra pizza or two on top if you want, of course.

We chose the margarita and the ham and pineapple, and they were made there and then and brought out to us pretty quickly. The pizzas were very yummy and we would definitely eat there again on a future visit.

Chill Factore is huge. Apart from the snow slopes, there are food outlets, shops, and a bar with a balcony overlooking the slopes, a-la a quintessential Swiss ski resort.

Parking is free for patrons for up to four hours. You might need more, especially if you’re planning to eat, so ask at reception to get your parking extended.

On the day we went, there were regular appearances by Peppa Pig, so we got in the queue to meet her too – bonus! She will also be coming back on the 19th and 20th November. More info at http://www.chillfactore.com/whats-on/christmas/santas-snow-kingdom/ 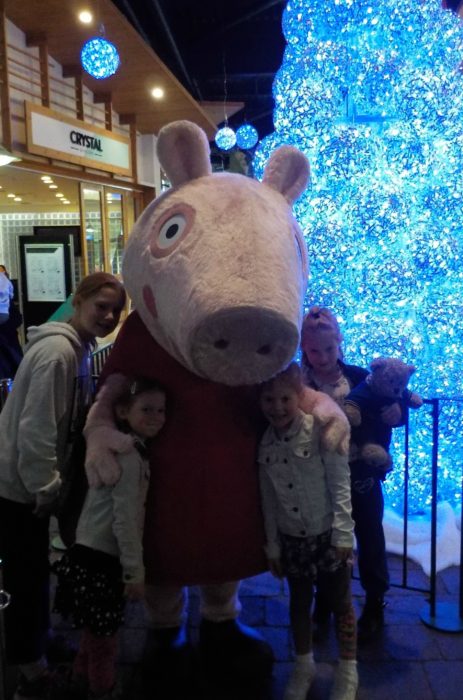 Disclosure – we were guests of Chill Factore, Santa, and Pizza Dalla Piste. All opinion is our own.