Supporting Chester FC means trips to Wembley have been non existent over the years so when we invited to the capital to visit the national stadium we knew it would be pretty different to the usual rope around a field, dog poo pitches that we’re used to in the lower leagues!

Wembley Park tube station serves the area and as we stepped out of the station, we were greeted with the magnificent sight of the famous stadium with its towering arch which can be seen right across London’s skyline. 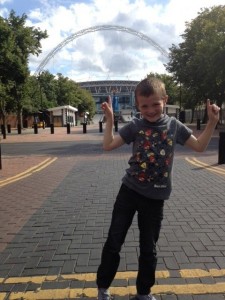 We joined the 4pm tour and were accompanied by six others and our tour host Ainsley. Ainsley was a massive character and considering he probably does several of these tours each day, he was in no way scripted or robotic – he told the stories of Wembley with bundles of enthusiasm and passion and had us all captivated during the 75 minute tour.

We got to sit in the press seats which has the best views of the pitch, mind you there is no such thing as an obstructed view at Wembley – the a fore mentioned arch acts as the supporting structure holding up the entire roof. We were told stories of the old Wembley with the legendary Twin Towers and given interesting facts and figures about famous matches, footballers and rock and pop stars that have performed there over the years.

The tour led us behind the scenes into the England players dressing room where their shirts were hanging and in the away dressing room hung the shirts of famous international stars.   A visit to the press conference room was great as Ainsley played various play question and answer games and we all took it in turn to have our picture taken sitting in the firing line.

After weaving through corridors and VIP rooms we found ourselves in the famous players tunnel and were able to walk those footsteps out on to the pitch and realised the true magnitude of this incredible stadium as the imposing arch towers above you and row upon row of red seats build into the sky.  Whilst at pitch side we jumped into the England dugout and sat in management seats which felt pretty special!


Our tour finished with being led up the 107 trophy winners steps to the royal box where we had a our picture taken with a replica FA Cup which you can buy all framed up for £15.

A truly brilliant tour for any young football fans – if anything it’s fuelled Matthew’s hunger for wanting to succeed in the game and walk out at Wembley for real one day!

Tours are held every day from 10am until 4pm and booking is advisable. Tours aren’t held on the build up and break down of major events and it’s £16 for adults and £9 for children.

For more information you can visit their website here.

This is a guest post from …….
British Soccer Mom:  My son Matthew, plays academy football to a decent level and so from my own experience of being a ‘Soccer Mum’, I blog about the importance of sport in our children’s lives.   A personal blog as well as lots of sport related articles and reviews aimed at parents, coaches and organisations who are involved in sport in the UK. You can visit the British Soccer Mom blog where you can find discount codes for this attraction and other football related products.

Check out our post – Things to do in London with kids