This week, we visited Wetwang Scarecrow Festival. We’ve been a few times before but this year, the twins could join in a bit more, and they loved it.

Wetwang is a village not too far from York in Yorkshire, and it’s very pretty. Yes, it has a silly name and appears regularly on those ‘Top silly place names’ lists and such, but it hasn’t suffered. It boasted Countdown’s Richard Whiteley as its honorary mayor, mainly because he used to make fun of it on TV. Now it’s BBC weather man Paul Hudson. 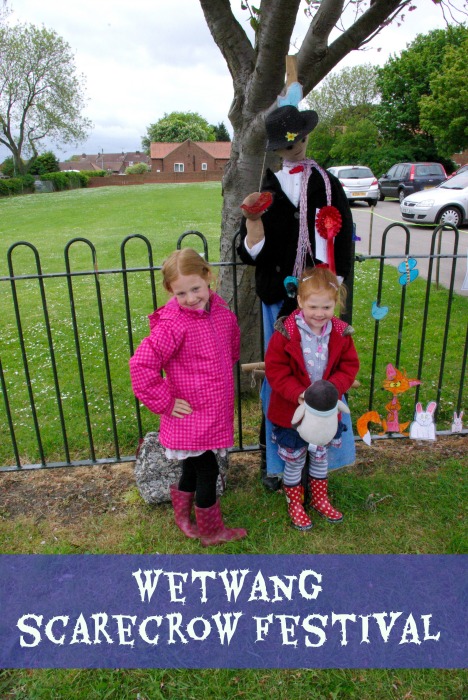 The village is still displaying signs of Tour De Yorkshire fever, but has pulled out all the stops again to get the scarecrows on display. The festival is hugely popular and is a big draw.

The parking is an issue, so take care, and some of the houses which take part are on the main road, so hang on to your little ones. But the views are fantastic, and it’s a great excuse for a bit of fresh air and exploration. There are over 50 households and businesses which take part, and there are prizes to be won. You can also vote for your favourite scarecrow.

It is a fun, free day out – barring the official map you buy from the village hall for the princely sum of 50p. The fish and chip shop is a must, and you have to have a go on the raffles and tombolas in the village hall (toilets and refreshments are located here too).

Here is a selection of photos of our favourite scarecrows – this year’s theme is ‘musicals’. See how many musical themed scarecrows you can spot.