Day one of our Lake District adventure saw us drive south for an hour to Bowness-on-Windermere and our children experience something I think was a first for them – go on a proper boat. 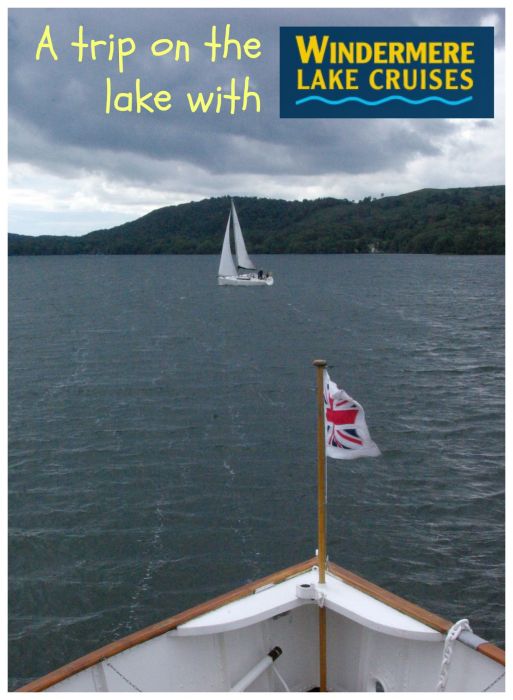 Windermere Lake Cruises run daily services between Bowness-on-Windermere, Lakeside, Ambleside, and Brockhole, as well as special evening, and island-sightseeing cruises. You can buy tickets for a specific route (known as yellow, red, or blue) or a 24-hour hopper ticket, and deals that include a visit to Lakeland Motor Museum or the Lakes Aquarium.

We chose the Yellow cruise from Bowness-on-Windermere to Lakeside, which takes around 40 minutes each way, and takes us to the most southern point of Windermere, the biggest natural lake in England. The Yellow cruise departs approximately ten times a day in high season.

We started our day in the nearby car park of Braithwaite Fold (pay and display, long stay) from where you can walk to Bowness pier, or catch the land train. The land train only took five minutes but it was fun and only cost £6.50 for a family return for two adults and two children, under 5s are free. Well worth it to avoid the increasingly-heavy rain. 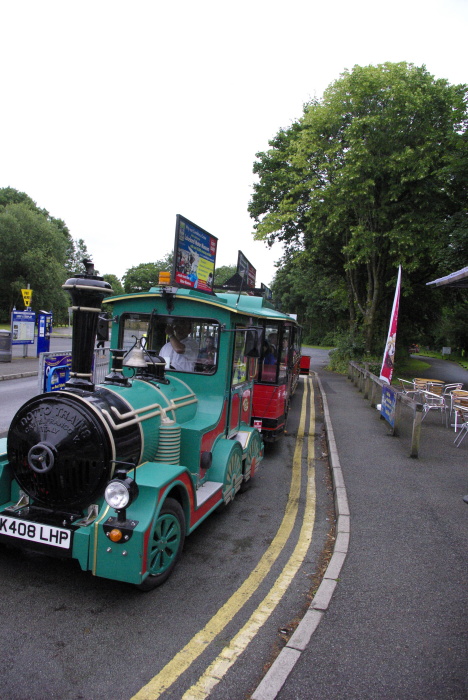 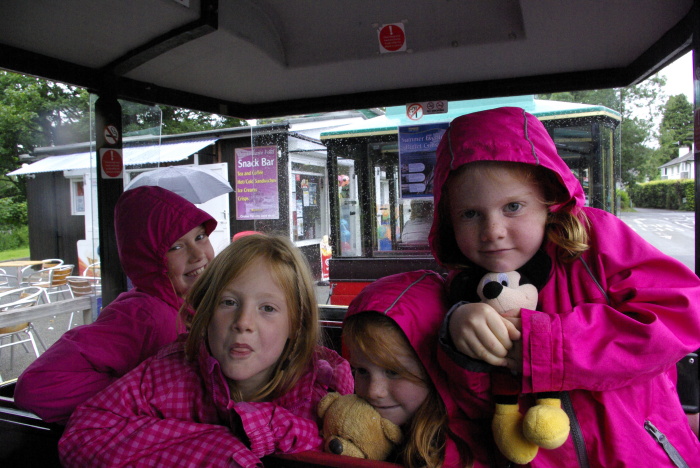 On arrival at Bowness pier we went to the ticket office to collect our tickets and then queued on a very rainy Pier 1 to wait for our boat. 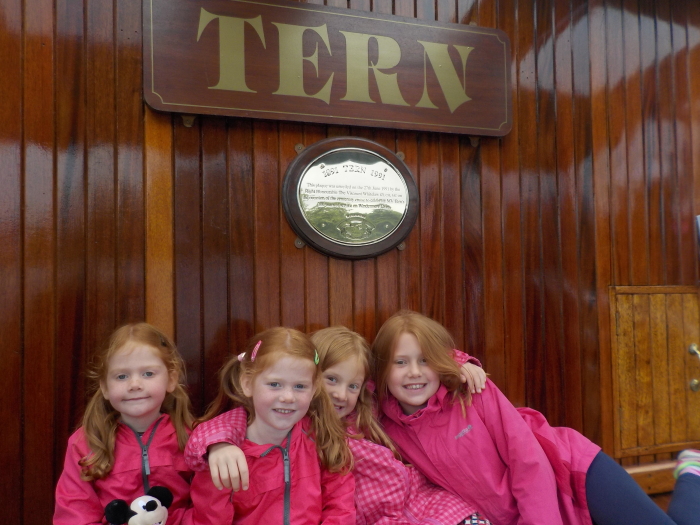 Our boat was ‘The Tern’, a steamer with both an open upstairs (it’s probably called a deck, I don’t know, don’t ask me!), and an indoors lower floor. We braved the open upstairs for a while, but it did get a bit chilly. The girls were the source of fascination with foreign tourists, particularly the Chinese and Japanese who were enthralled by their ginger hair. They were little celebs and some tourists even asked to have their photos taken with them all. 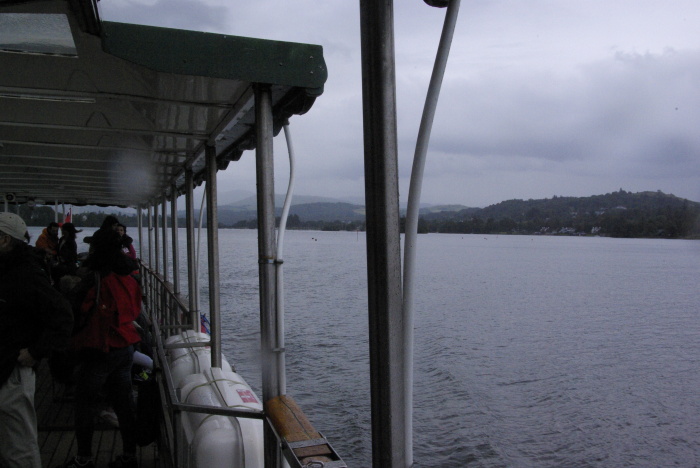 We moved downstairs (below decks, at around sea-level) after 20 minutes or so. It was a bit full but we got to see out of the windows to watch for Lakeside approaching in the distance. The toilets were below decks, and there was a small snack bar too, which is helpful. 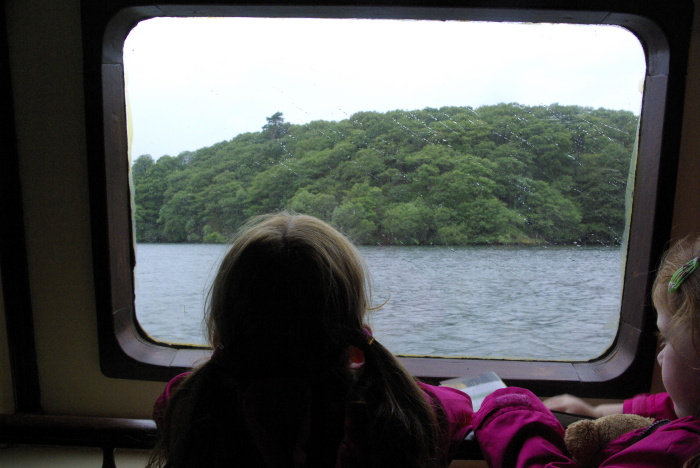 After around 40 minutes we arrived at Lakeside. At Lakeside there is the harbour, and also the Lakes Aquarium, a shuttle bus to take you to the Lakeland Motor Museum, and a train station with loos and a cafe for the Lakeside and Haverthwaite Steam Railway. Which did we choose to try first? You’ll have to wait and see tomorrow. 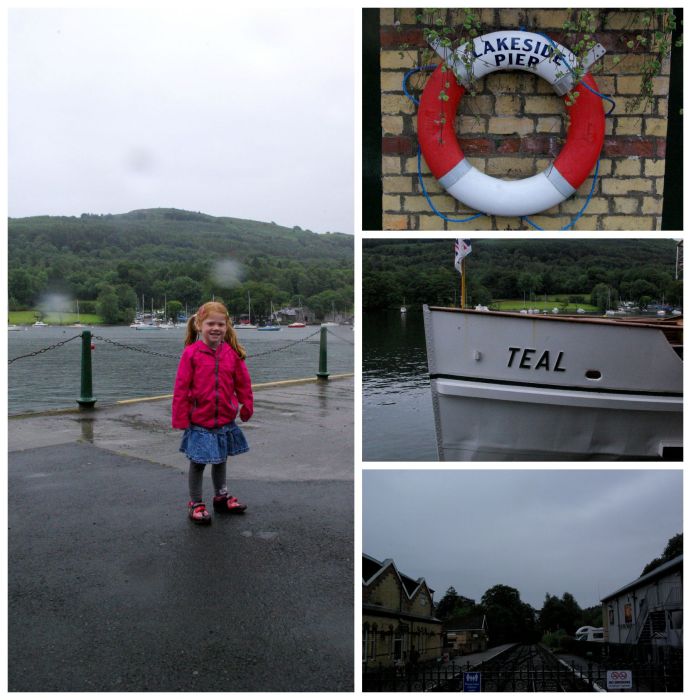 After a brief interlude, we returned to Lakeside Harbour for our boat back to Bowness-on-Windermere, which would turn out to be the Teal. First though a quick visit to the gift shop and cafe for ice-lollies all round.

The Teal was slightly bigger than The Tern and there was some really nice indoor seats with tables, some with six seats, so perfect for us. The snack bar was bigger too, and the seating right at the front of the boat outside was wonderful, if not a little bracing. 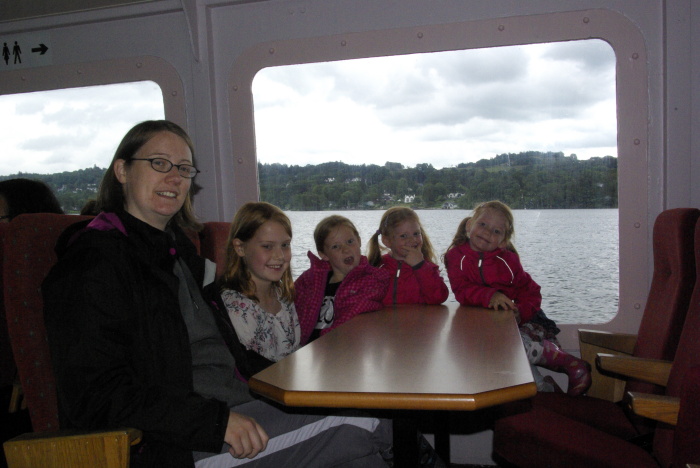 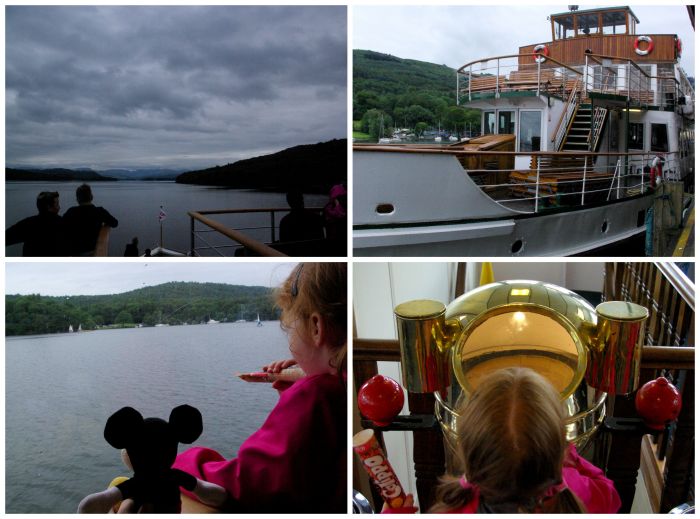 The girls got quite restless towards the end of the trip, but there was a little to look at, like an old compass, but we adults enjoyed the view the most. You can buy a guide book from the snack bar which has information about some of the points of interest en route, such as this old house with its own stone pier.

40 minutes later and we arrive back at Bowness-on-Windermere, just in time for tea!

We loved our trip on Windermere Lake Cruises, being nice and smooth for very seasick landlubbers like myself, and being just about long enough for the children. It made for a fantastic way of seeing part of one of the most well-known lakes in Cumbria, and was a relaxing way to pass an hour or two.

We would be back later in the week to visit another Lakes attraction, but stay tuned to find out where we went on this trip.

Disclosure – We were guests of Windermere Lake Cruises for the purposes of this review. All opinion is our own