I have heard good things about York Maze and, despite living less than an hour away, have never been. I always thought it looked a bit expensive, considering it’s only a maze cut from maize, but I was very wrong.
This place is more like a small theme-park with a maize theme! We spent six hours here, and even with the odd small rain shower, there was LOADS to do.

York Maze is immense and in my kids’ words – “awesome“. There is so much more to it than the maze, which in itself is very impressive – it’s the biggest maize maze in the UK.
Every year they have a theme. In 2013 it is Doctor Who, and while the theme is not overkill, there’s enough to interest little fans of the TV time-lord.
On entrance we met Kernel, York Maze’s mascot. He was very friendly. 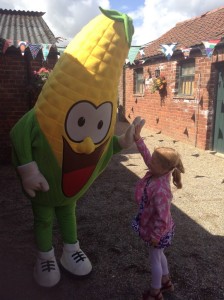 Then we went in the new attraction The House of Cornfusion, which is a fun-house in a barn. Not for those with unsteady feet, or various medical conditions like epilipsy or vertigo. It is seriously weird and disorientating. Brilliant fun though. There is a dark maze, a rolling walkway, a shrinking corridor……..

…….and a fantastic gravity room, which we still can’t work out how it worked. Great fun but probably not for very young children or the infirm. 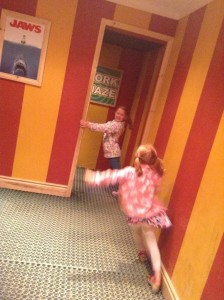 Then we visited the farm. It wasn’t very big but had sheep, goats, cows, ducks and an alligator lake (hint: not real alligators). 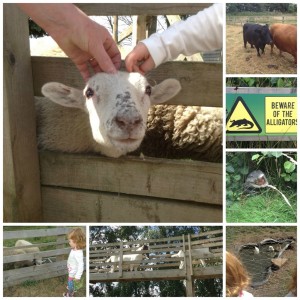 Then we watched one of the thrice-daily York Maze pig races. We bought a badge for 50p which constituted our bet, then watched as they all ran round after a man in a chicken suit laden with pig feed. You have to watch it on video to truly appreciate how amazing pig racing actually is.


We had four pig badges out of six so we were hopeful of a win. Sher Gammon brought home the bacon and one of our party got to collect a winning medal from Kernel in the “weaners’ enclosure” 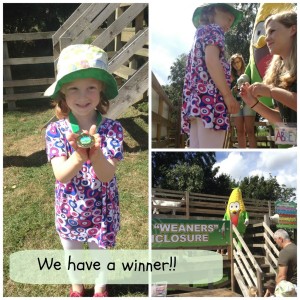 The maze is the main attraction at York Maze. This year the immense field of maize has been cut into a dalek and the faces of William Hartnell and Matt Smith. We bought a navigation pack for £1.50 from reception which contains a very accurate map, and a compass. 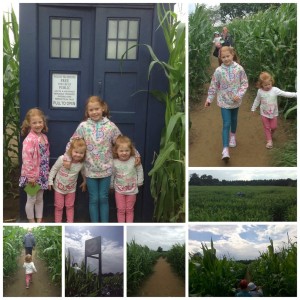 We managed to get through without too much arguing. It was huge. You know like the maze in Harry Potter and the Goblet of Fire? Like that one. Some of the clues were up on the viewing platforms, so wouldn’t be accessible to those with mobility issues or prams, but the pathways were mainly level and most were wide enough even for a double buggy. From the top of the first platform, you could see the TARDIS peeking out over the top of the corn.
After some debate about whether we were in William Hartnell’s ear, or Matt Smith’s chin, we found all six clue points, wrote the code in our map, and posted the completed form in the post box on the way out. The maze itself took over an hour, and we did well. Visit the toilet BEFORE you go in!
After the maze, there is lots to do including crazy golf, a painting wall, an inflatable slide, a bouncy pillow (which has segregated sessions for little kids and big kids), a construction zone with squidgy bricks, and a “cobstacle course” – all of which are free. In fact, I only noticed one or two smaller attractions that needed to be paid for as extras, and there was plenty to do without doing these.

One of our favourite bits of York Maze (for the older kids anyway, the toddlers weren’t too sure about it) was the tractor ride. You sit in a big trailer pulled behind a tractor and go crow-hunting. The trailer assistant narrates the story, gets all the kids to join in with shouting at the crows, and is in charge of the huge water cannon at the front. Needless to say, the cannon wasn’t always pointed at the crows and everyone got at least a little bit wet. Great fun. Not for hydrophobics! 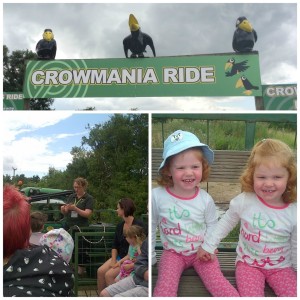 Another of our favourite attractions was the Maze of Illusions. It wasn’t very mazey but was a little trail full of optical illusions and some very funny mirrors. 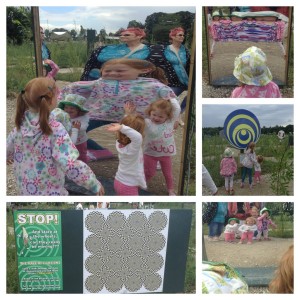 In the middle of all of this is a large playground with sand and water play, overlooked by the terrace where you can buy lunch or a cup of tea. 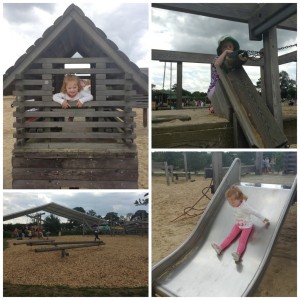 The cafe is very reasonable and the food is obviously made fresh that day. The children’s lunch boxes were £3.95 for five items and there was a choice of fruit pots as well as the usual crisps, sandwiches, and yoghurt.
There are loads of picnic tables and you are welcome to take a picnic.
The very clean toilets are next to the cafe/restaurant including baby-changing facilities. If I was to be very picky, I would say that there needs to be some toilets at the far end of the park as it’s a long walk back for little legs.
The day we were there, there was a bird of prey stand, where we were able to hold some birds. 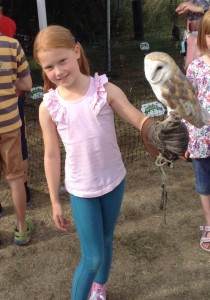 Then, after getting very tired we decided to head home, though we could easily have spent another hour there (the park is open until 6.30pm). Then the Dalek chased Grandma through the courtyard, which was highly amusing, though it did worry one of the toddlers somewhat. 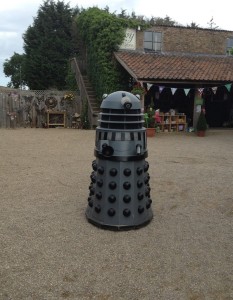 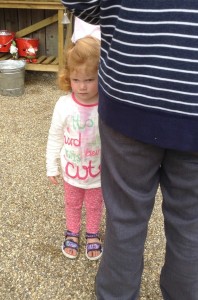 Exit through the beautiful and tempting gift shop.
Then a quick hug of Kernel before we left. Worn out and happy. 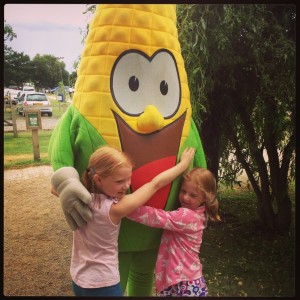 York Maze is dog-friendly. I also think someone had brought their pet parrot with them too. Random. But then, it was that kind of place.

Top Tip – don’t underestimate what there is to do for children here. Allow plenty of time. The website says at least three hours, but for us that would not have been enough.
York Maze is on the B1228 South East of York.
You can get more information from their website – York Maze
Disclosure – my family and I were given complimentary entry to do this review