Legoland Discovery Centre is somewhere we have visited before but it’s been almost three years, which to my children, is like aaaaaaaaaggeees ago, although it feels like yesterday to me. Where does the time go?

After we’d visited Sea Life Manchester, and had some lunch, we hopped back over to the Barton Square area of the Trafford Centre to visit Legoland Discovery Centre. 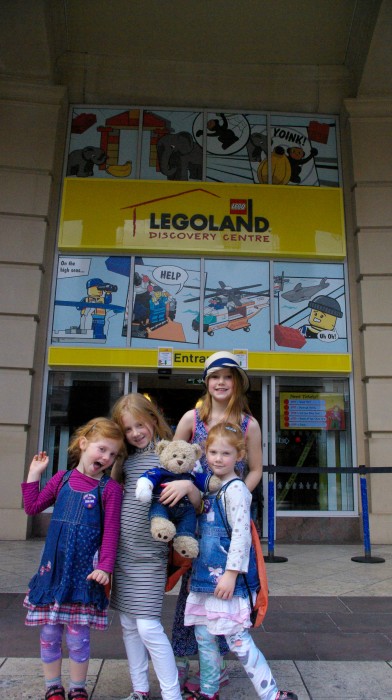 Again, we visited during October half-term and we knew it would be busy but we didn’t have to queue to get in. In fact, there was no queue at all! We proceeded on, through the obligatory green screen photo opp, and up in the lifts to the main floor.

First stop was a little wait for our entrance ceremony, which is a narrated insight into how they really* make Lego bricks – *not really. The younger children loved this and we’re thrilled to bits with their free gift at the end. 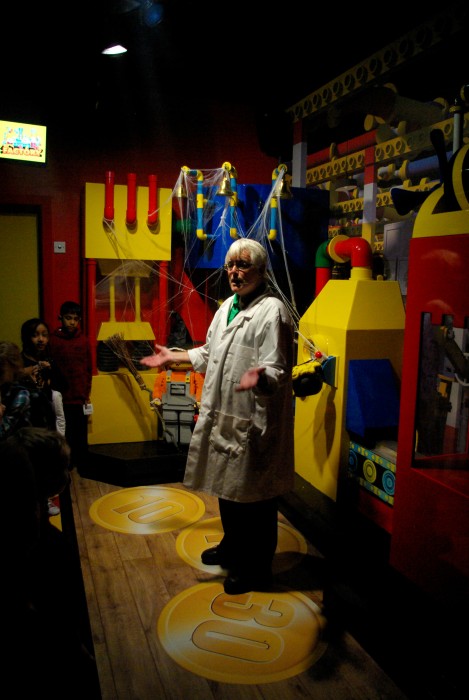 Then onto the main attraction and we could do what we wanted from here on in. We skipped the first ride – Kingdom Quest Laser Ride – as the queue was suddenly very big, and we headed on in to Miniland.

Miniland is an assortment of Lego models on a Northern theme. There is a reconstruction of Blackpool with its famous Tower and Winter Gardens. There are recognisable landmarks from Northern cities, such as Manchester and Leeds – see what you can spot. Charlie the class bear had a lot of fun looking at all the miniature models.

To be honest, the attraction hasn’t changed much from when we last visited a few years ago. The old favourites, such as Miniland, are still what they were but the girls enjoyed it all over again.

The LEGO pits had changed format but I was glad to see they still had them. Sitting in a huge tub of Lego was the twins’ favourite activity here. I could have left them here all afternoon. 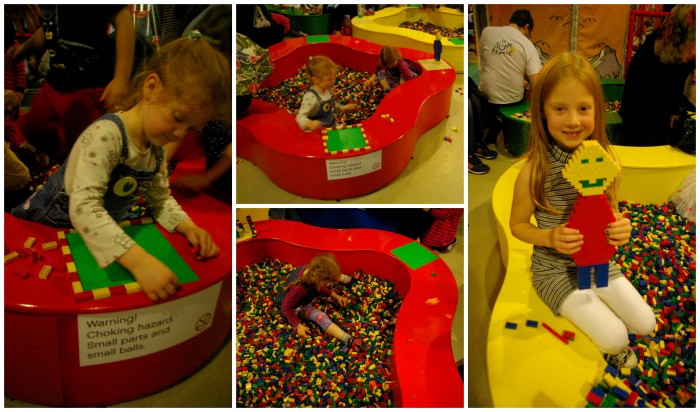 They also liked the revamped Lego Friends corner with karaoke machine and yet more Lego. It wasn’t quite as pink as I remember it from last time, and is generally cleaner and smarter. 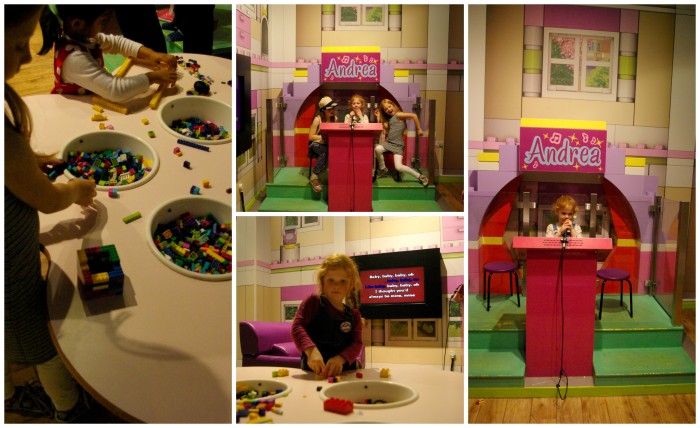 The biggest queue of the day was for the Forest Pursuit ride, which is electric cars round a Lego themed track. To say we queued for around 30 minutes for this ride and then they went round twice was a bit disappointing, but the twins loved this and found them fairly easy to control.

While the younger children were bashing around the race track, the 11yo was in a Master Builder class. These are pre-scheduled Lego tutorials on a first-come-first-served basis. The class learned how to build anglerfish from Lego with the help of a knowledgeable and enthusiastic Lego tutor. At the end of the session, the fish were popped into bags and labelled, then sent down to the gift shop so you could buy it on the way out. The class was free but the Lego set was £3 if you wanted to take it home. We didn’t get to do this last time so it was nice to do something different this time around. 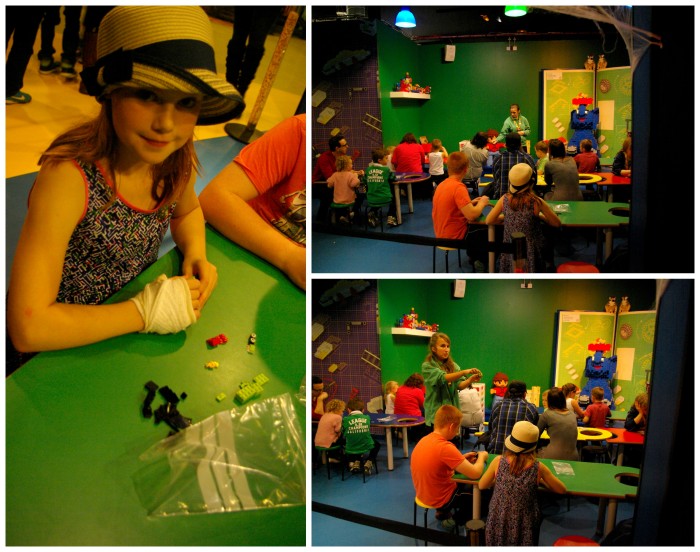 One of the twins took Grandma on Merlin’s Apprentice Ride, which was good fun but tiring for my poor old Mum. Have a look on our video for a short burst of this.

The four-year old twins loved the play frame. It was three stories high with lots of slides and rollers. 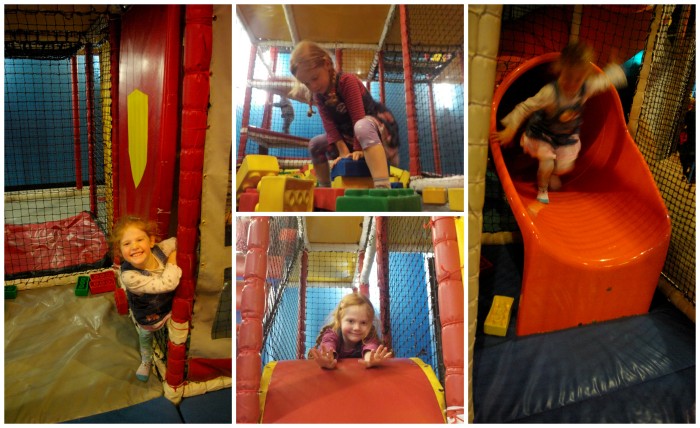 Then we went to watch the 4D movie – a 15 minute film featuring action hero Clutch Powers. I’m sure this was the one we saw last time, but I enjoyed it anyway. If you want to get wet, sit front and centre. One of the twins loved it, and the other found it too scary. The first time we queued about five minutes for this but when we got to the front, the auditorium was full. We went back again a bit earlier for the next session and got in ok. The times for the next film starting are in big numbers outside, so you can see how long until the next one. 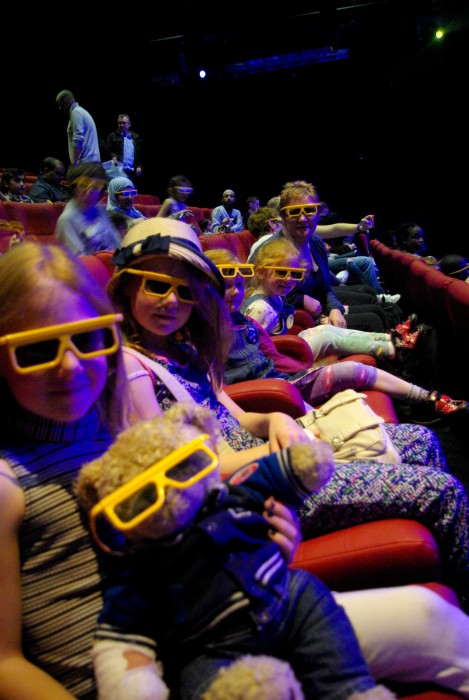 As Legoland Discovery Centre was not long off closing, we ventured through to one of the new bits – a Lego Star Wars display. The girls were not overly impressed to be honest but for any little fans of Star Wars, these models are fantastic. I took some pics for Dad instead. Have a look at our video (below) for a recreation (in Lego obvs) of the light saber battle between Boba Fett and Obi Wan Kenobi. I think it’s from Episode Two. Don’t ask me, I’m not that much of a nerd. Actually, it could be Jango Fett. Who knows? 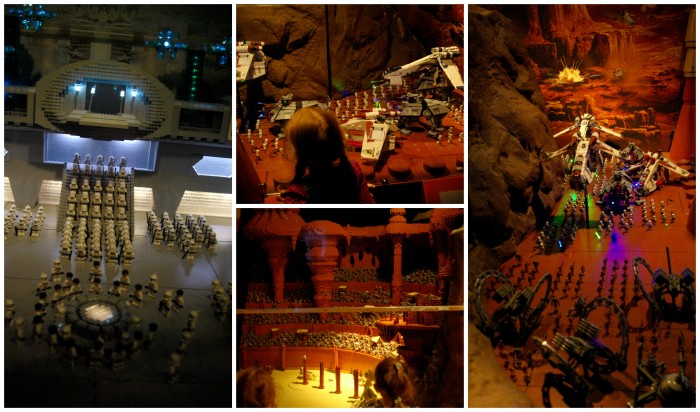 The last part of this was a Lego Ninja activity where you had to get through a room without setting off the lasers. Futile when there are loads of excited children bombing in while you’re having your turn. Best for a quieter day I think.

So, we went back to the Kingdom Quest ride to see if we could sneak a ride before we left, but it had closed. Oops. Ah well, we’d done enough already and were ready for our tea.

Thank you, Legoland Discovery Centre. We’d had a fun time on what was a very rainy afternoon in half-term.

Verdict – It was, as expected, a very busy and noisy day to be visiting. For Lego loving children, this is a fantastic way to spend an inclement day. I can totally see why annual passes are popular here. It’s a fab place just to pop in for an hour on a weekend when visiting The Trafford Centre, or for a session after school.

There is a cafe and tables and chairs so adults can sit there and read in peace while their children play. Maybe not in silence, but a good place to set up base. There’s not much the children can’t do on their own if they’re old enough.

There wasn’t a lot different that I could see from our last visit, but the children enjoyed it so much that I don’t think much needed improving anyway. I would certainly prefer to come on a quieter day, but you can’t really avoid it in half-term can you?

Disclosure – we were guests of Legoland Discovery Centre for the purposes of this review. The graphic above is affiliate