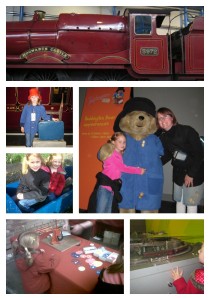 During our visit on the very first day of the half-term holidays, we hunted in the Station Hall for nine teddies ‘bearing’ letters. We had to re-arrange the letters to spell something that Paddington likes to eat. I’ll give you a clue – there are a couple of Ms and a few As, as well as other letters like L and D.
Then we grabbed Paddington’s wellie boots to play ‘wang-a-welly’, complete with a badge/medal at the end to mark our participation. (this is £1 extra per person).

After that, we listened to a Paddington Bear story inside a railway carriage. Then we dressed up like Paddington Bear, including re-creating his sad little face. 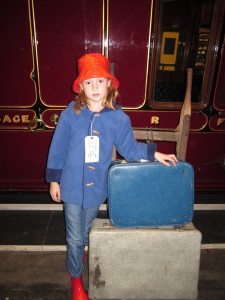 Not forgetting actually meeting the bear himself…..(for this we queued about ten minutes). He comes out five times a day (10.30am, 12noon, 1.30pm, 3pm and 4pm – times may vary depending on day). He is very furry and friendly. 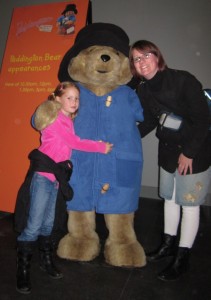 This is on top of all the usual NRM attractions, such as a multitude of trains old and new.
On this trip we also tried out the simulator (extra charges apply). We took a flight back in time through the dinosaur period, ancient Egypt, the Viking invasion, and was involved in a World War II dogfight. Very entertaining.
We then tried out the miniature railway (extra charges apply). This is a short trip up and down for about 200 yards, which is perfect for young railway fans. My children loved looking out for the placed items, like model herons and hedgehogs.

We loved our trip to the NRM. We were there three hours, which was a bit rushed. We still didn’t get to see the art gallery, or the engine workshop, and didn’t look at half of the trains. You should allow longer if you want to make the most of it.
Please read our full review of the museum for accessibility and other family-friendly facilities.
The Paddington Bear exhibition is running from 27th October to 4th November 2012. For more information, you can visit the NRM’s website
Access to the main museum and exhibition is free. Extra charges apply for the wang-a-welly, the simulator, and miniature railway. Donations welcomed.

(courtesy of the NRM)