Paultons Park is a theme park in Hampshire. Part of the park has recently become Peppa Pig World. If you have children who are fans of the round, porky one, then this is the place for them, even if you can’t think of anything worse than spending a large chunk of your day queuing with excited, over-tired 4 year olds. 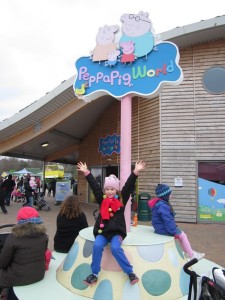 We visited on the first good day of the Easter holidays. It was busy, I thought, but because everything is quite well spread out, it didn’t feel cramped. We got there early so parking and getting though the turnstiles was relatively quick – we had booked our tickets online to make things faster.
We went to the Peppa Pig part of the park first. We had to. The toddler twins started shouting “Peppa, Peppa” from the moment we arrived. They almost exploded with excitement with the first glimpse of a Peppa atop the balloon ride. The Peppa Pig part isn’t actually that large – there are about twelve rides and attractions, a couple of food stalls and a Peppa themed gift shop. It is, however, extraordinarily well done. The theming is spot-on. Everything from the windows in the ride booths to the ducks on the pond are 100% Peppa. 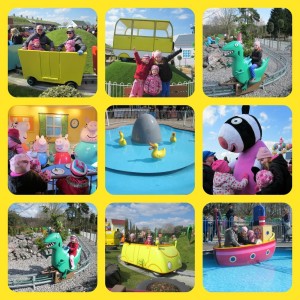 There is a little train ride where you can ride on Gertrude, Grandpa Pig’s miniature locomotive. There is a muddy puddles play area, which has fountains and other water features which would be fab in the summer (take a towel and cossie). Sadly, it was too cold to do any of that shenanigans when we went.
All of the rides have height restrictions, some lower than others, but adults are allowed to ride with children on pretty much everything if they are too small. Some rides are not recommended for babies under 12 months. My 5yo was able to go on everything on her own, but the 2yo twins had to be ridden with on a couple of rides.
Every so often, a character appears to meet the children, to accept over-enthusiastic hugs, and to pose for photos. We met Suzi Sheep, and Zoe Zebra. There were also lots of characters dotted around for children to look at/shout at.

At 1pm we headed for the small stage where Peppa and George came out to wave and stir-up the maniacal throng of pre-schoolers.  Like JLS for the toddler generation. 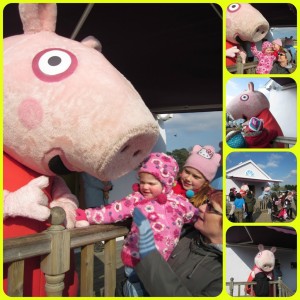 There are photo opportunities, such as the inside of Madame Gazelle’s school house, where you can pose with Peppa and her friends and buy an official photo for £8 a pop. You can buy a photo pass for £20, which will give you any 4 photos of your choice from the entire park. There are official photos on the two or three major rides and you can buy them from the conveniently placed photo booths dotted around.
If you love Peppa, inane music and bright colours, you will love this part of the park.
The rest of Paulton’s Park is a very good, family-oriented theme park with a nice mix of rides and attractions. Some of them attract an extra fee, for example the go-karts, but the vast majority of the things are included in the entry pass. We even found some little kiddy-rides (the sort you get outside supermarkets for 50p a go) which didn’t require any money.
We went on the log flume, the Wave Runner (a bumpy water slide you go down on in dinghies), the pirate ship, and the swing chairs. My 8yo’s favourite thing is the Cobra – a large fast roller coaster, while my 5yo loved the log flume the most. The 2yo twins could go on a couple of rides on their own, including a little rabbit-car ride, and a seal-ride round a little water course. 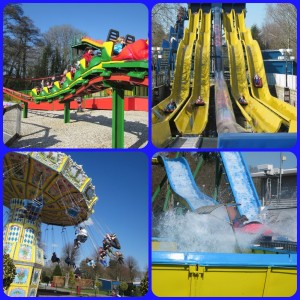 All of the rides have height restrictions on them – you have to be over a certain height to ride them alone, or with an adult. They are very strict about this and children are measured before they get on. However, there are so many alternative rides that it didn’t matter if the children couldn’t get on as we just went to the smaller version instead.

We also enjoyed the small but noisy dinosaur park area, and there were also some formal gardens and aviaries to explore too. I got to see a Kookaburra for the first time. 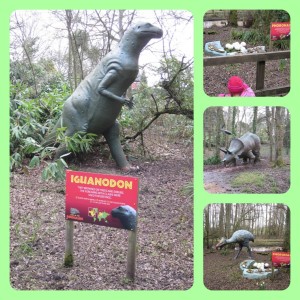 We tried out the 4D film which was good. A bit scary for under 5s, but the animation was excellent. Sadly the 4D bit wasn’t working which meant at least we didn’t get soaked.

We also went to watch the penguin feeding, which wasn’t too busy and we could ask questions of the keeper afterwards. Cue my 8-year-old!

I was pleasantly surprised by how many picnic areas and benches were provided, although I don’t know how much good these are in more inclement weather. There was a large undercover eating area just outside Peppa Pig World with plenty of tables available. Toilets are abundant throughout the park, and on the whole, clean and well-stocked. All of the toilets I found were adapted with an extra, smaller pull down seat for children, which I think shows how Paulton’s Park understands families. Baby changing facilities are available at most or all toilet points.

The food places we tried were the usual theme park fodder, but reasonably priced and we weren’t waiting long at all.
If you want to do both parts of the park fully, you will need to go for more than one day, or try and choose a day where it’s less busy.
Several of the rides have photo points where you can buy your official photo after the ride, however you didn’t have to exit through the photo booth so were under no pressure at all to buy them. The main gift shop is on the way out but a separate bit you can avoid if you want to.

I have to say the staff were fantastic. They were very friendly and obviously liked their work. The only thing that could have improved our trip would have been if Miss Rabbit had operated all the rides, served us in the shops and cafes, and actually driven the little train.

We had a most amazing time and the twins cried when we had to go home.

It is signposted off the M27, and is pretty easy to find.
I would recommend it for fans of Peppa and children up to about 13 years old. There aren’t very many exciting rides and more adventurous children would be better off at a larger theme park. Young children and toddlers will absolutely love it!