Beamish Museum is a huge open air museum just north of Durham in County Durham. It’s about fifteen years since I last went and it’s over a two-hour drive from our house, but we made a massive effort to get up and visit it because I remember it being such a good day out and I was sure our two older girls would love it. We left the younger children with grandparents and spent the day at Beamish.
The first thing to notice about Beamish is that it is spread over a large area and is very hilly. While the whole site is accessible, there are some places that you can’t get to with prams or wheelchairs, for example the first floors of some of the houses, especially those that are original to the site and built before accessibility was a concern. Also, some of the slopes are quite steep and a pram could become hard work after a while. It is best for older children who can walk for longer periods without a buggy. 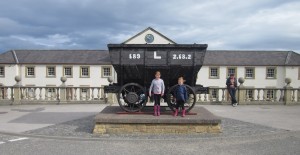 Beamish is beautiful and a real step back in time. Some of the Beamish buildings were there originally and the museum has built up around them. Some buildings are replicas of others elsewhere in the region, and some have been moved brick by brick to Beamish.
The museum tells the life of Durham folk from the last couple of hundred years. There is a manor house with estate, a Victorian town with a railway station, a pit village from the early 20th century, including an original mine, and a Victorian school house. There is a 19th century farm, and around all this there are trams from various eras to shuttle you about. 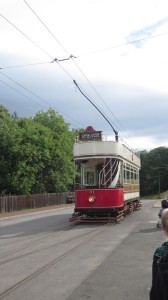 First up, we visited the Manor House. There was realistic looking food in the larders and kitchen. We tasted some authentic biscuits in the kitchen, and chatted to a lady in the farmer’s cottage. The children were horrified by her stories of how young children would have been covered in goose fat and put in the attic to sleep. Then we had a nosy around the wonderful kitchen garden, and met the house goose and pigs.

Then we had a stroll down to the new church, which is being rebuilt from a derelict one from a nearby village. The original bricks are being re-used and the timbers (which were damaged in a fire) re-created to original style. Then Beamish will have its own manor-house church. 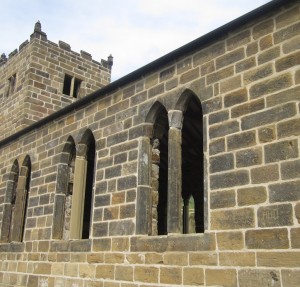 A short walk to the Estate’s wagon shed and we saw an engine being brought to life. 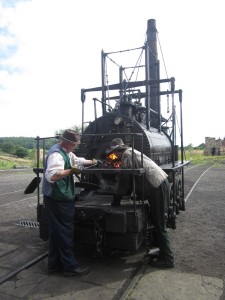 Then we went to the Town to have a mooch about. There is so much to see here and you can spend a huge chunk of time looking at all the tiny details. We looked around all the buildings which included a Masonic Hall, the bank, a cycle and motor shop, an old fashioned co-operative store, a traditional sweet shop, and a print shop. 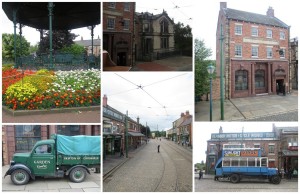 There was also a dentist’s surgery, a middle-class house, and the house of a pianoforte and singing tutor! 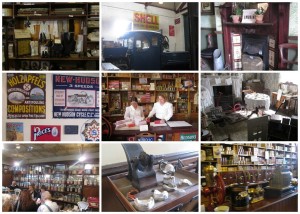 Some of these buildings were rammed with people – the back room of the sweet shop we couldn’t even get in to to see the sweet making demonstration. This is the busiest bit of Beamish I would say. There is a nice little town park to sit in with a bandstand. The main cafe is also hidden away discreetly above the co-op. The food is pretty good and not too extortionate (an adult’s hot meal was about £5, and a kid’s lunchbox was just under £4). There are also refreshment stands and smaller cafes dotted about the museum. You can also stop for a pint at the town’s pub!

The railway station, Rowley, is just a short walk away. Steam trains run on a weekend. There is also a small funfair (a carousel, swingboats, and a traditional coconut shy) on the village meadow. These cost a little bit extra.

Beamish run special events throughout the year. The day we went there was a selection of traditional games and circus skills to try out. We got help learning how to walk on stilts, and got dizzy trying to hula-hoop! 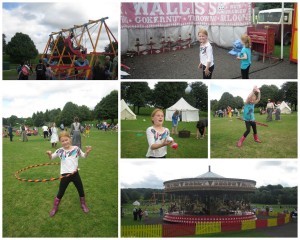 We took a slow walk up to the farm, stopping en route at the warehouse. Here is a huge display of all the artefacts Beamish have collected over the years, which they may use in the future – I am told they are planning a 1950s zone! These included an array of old televisions and radios, and an awesome retro hair salon hairdryer bench. 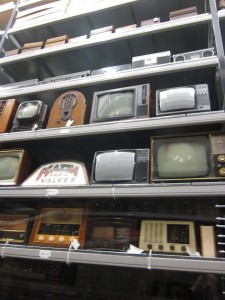 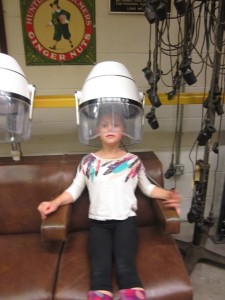 Beamish farm is pretty interesting, though there’s not as much to see here as the town or manor house. The farmhouse is good. The farmer’s wife was making us all some bread and jam to taste. There was also a litter of piglets in the sty. 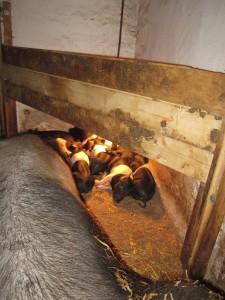 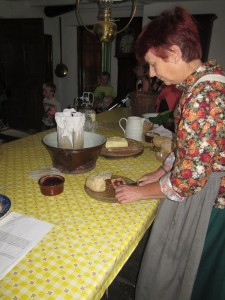 The Beamish pit village is very, very good. They have built the village around an original (now disused) mine. There are miners’ cottages, a church, a Victorian school and yard, a meeting hall, a village green, and masses of pit paraphernalia to explore.

The tour down the pit takes about 16 people at a time. You walk down a few yards – you have to stoop because it’s only 4′ or so high at some points. Then you turn down a tunnel and are shown where the men (and women and even young children) would have worked for eight or ten hours at a time digging coal out of the ground and pushing the barrows back out again.

Then they turn the electric off so you can see exactly what conditions they would have worked in. The pit they showed us was a health-and-safety version of what the pit would have been like at the time, and a lot nearer the surface. It certainly makes you think about what life was like for those miners and their families not all that long ago. I wouldn’t recommend this part for those scared of the dark or close spaces, or those with mobility problems. But for everyone else, it’s very interesting and created a lot of questions from my nine-year old. It takes about ten minutes from going down to coming back up again. 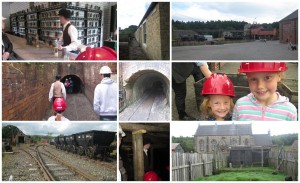 Our favourite part of the pit village was the Victorian school. We tried writing with a pen and traditional inkwell, and attempted to do hoop and stick in the playground. It’s a lot harder than it looks! 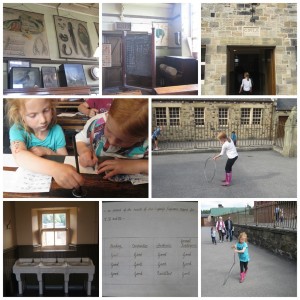 A quick turn with the traditional games on the village green….. 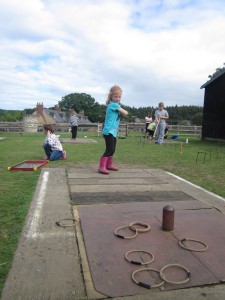 …..and it was time to go home. Via the gift shop, naturally! 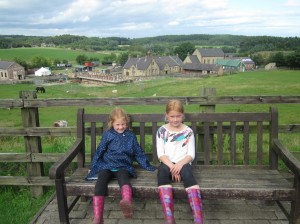 Beamish is HUGE. We were there from when it opened at 10am to when it closed at 5pm. We didn’t rush but you couldn’t do it all in less than 3 or 4 hours. Get there early.

It is also tiring. Take the tram where you can. They can take a limited amount of folded up buggies.

Toilets are well signposted and in all the major areas. There are some baby changing facilities too.

If you’re not sure of anything, ask! The staff are easily distinguishable by their traditional costume. They are very helpful and knowledgeable.

Take a picnic. There are loads of areas to eat your picnic and even if it’s busy, you can pull up a patch of grass in the town’s park or the meadow.

If it’s busy do the museum in reverse order. If you get there early, head for the Manor House first, and leave the busy town until later in the day when it quietens down (allow at least an hour or more for this part as there’s lots to see).

The car park is ample and it is easy to find (signposted off the A1(M) at Chester-Le-Street.

The main hazards for young people (or anyone really) are the stone steps everywhere as would befit the era, and the moving vehicles. There are also lots of live animals and lots of the stuff that comes with them (or from them). Exercise the caution you would every day and it’s all fine, but don’t expect baby proofing!

I would recommend Beamish for children aged from five and above. Children under five are free. While they would enjoy the day out and the fresh air, I’m not sure how much very young children would get out of it, and it can be tiring for little legs (or people pushing prams). My nine year old LOVED it and found it all fascinating. We were glad we hadn’t taken the two-year olds.

We love Beamish and would heartily recommend it to families with older children and teens.