The Black Country Living Museum is an open air museum taking you back to the past of the Black Country. It has a mix of original and re-created industrial, commercial, and residential buildings from centuries and decades past. It is hugely educational and a great day out.

Black Country Living Museum is in Dudley in the West Midlands. It’s very easy to find following the brown signs and there is car parking available (get an exit token for £3 from the desk when you pay for entry), though I can see it could get full quickly on a busier day – we went on a Sunday during the school summer holidays.

There is lots to see and do at the museum. Before we got there, the girls were in a sulk and said that ‘museums are boring’. They certainly didn’t have that attitude after a few minutes here and once we had left.

The first thing I noticed about the museum was how compact and walkable it is. Comparisons to Beamish are inevitable, so I’ll say that the Black Country Living Museum has a similar amount of things to look at and do, but it is spread over a smaller area. Although there are areas in the museum which will be inaccessible to prams and wheelchairs, the majority was do-able with a pram. Take care for water hazards though, particularly in the industrial areas around the canal. 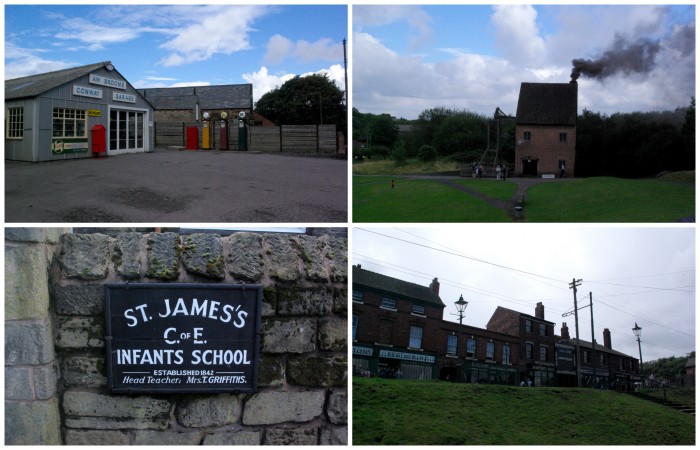 The first thing we did was wander down past the re-created Newcomen Engine, and towards the town. We figured as that was furthest from the entrance and we had arrived early then it would be less busy up this end. We were right, but en route we were attracted to the industrial area next to the canal where there was a chain making demonstration. The Black Country is famed for its chain making industry, and we got to watch a man show us how chains would have been made using traditional methods. It was very interesting, the man was very engaging, and the girls stood and watched the entire time, which is no mean feat.

From here, we headed on the High Street and had a nosy in a bakery, a grocery store, and an old-fashioned sweet shop. Sweets can be purchased here if that’s your sort of thing! Some of the items we could touch, but some were barriered off, which is probably a wise move on the museum’s part. 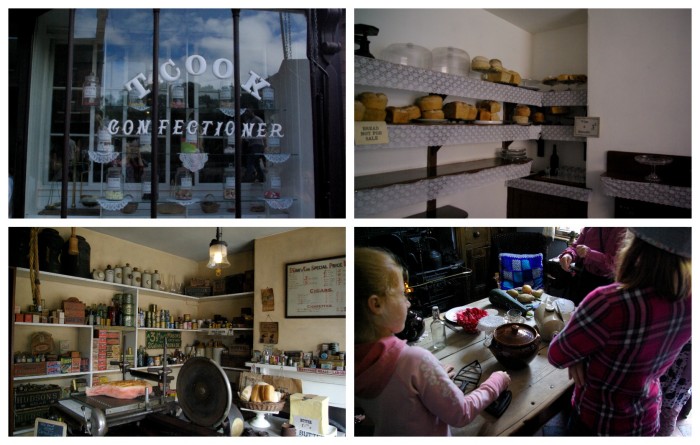 The town was a mix of shops and residential properties, and we had a look around some of the terraced houses, complete with multi-purpose living-room/ kitchen/bathrooms, and the outside scullery with wash tubs and mangles. The girls were very concerned for the obvious lack of bathrooms, and with the help of the museum staff explained how people would get baths, and showed them where they would go to the toilet. 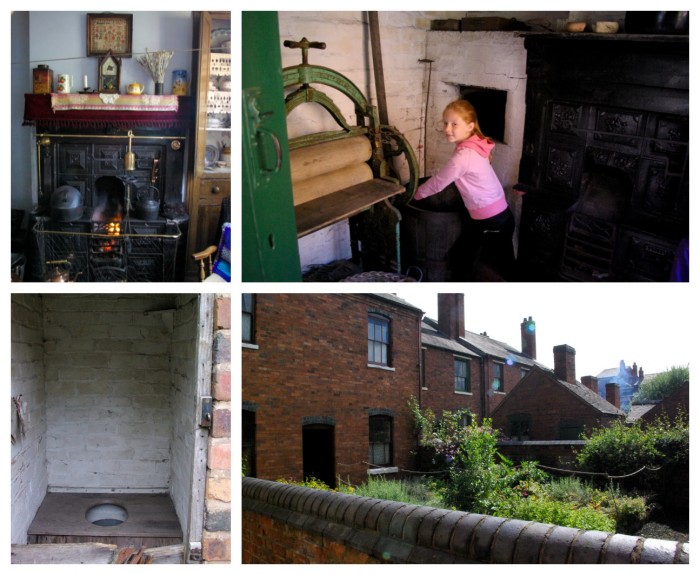 This led us to seek out the hardware shop where people would buy their tin baths and such, and also the chemist shop, which was very pretty.

As was common for a lot of working-class mining towns, there was a Methodist chapel, so we had a look both outside and in. 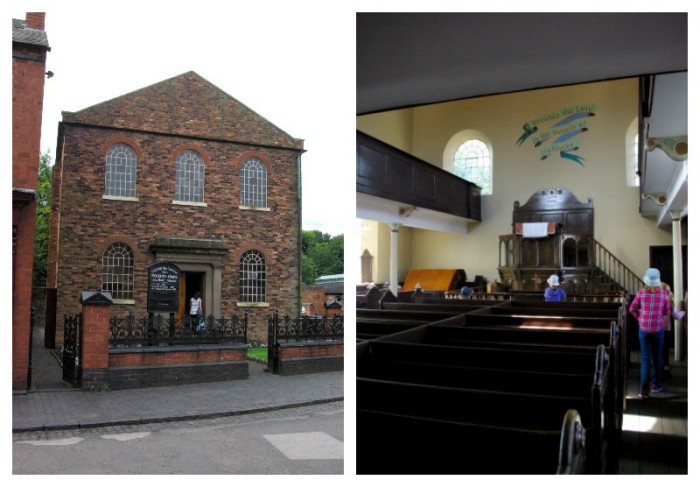 On the street, there were old fashioned toys and games to play, including hobby horses, cup and ball, and hoop and stick. The 8yo got stuck into learning the hoop and stick, which is more difficult than it looks. The tech-obsessed 12yo was very pleased of her mastery of the cup and ball. 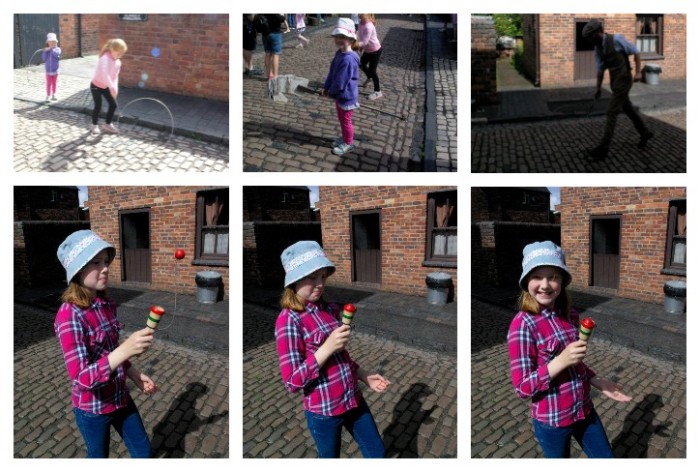 Feeling hungry, we did the short walk up to the indoor/outdoor picnic area overlooking the canal area. If you think it looks a bit ‘Peaky Blinders’ that’s because some of the series was shot here. The museum do Peaky Blinders themed events. Check out the website for more info.

We were glad we had taken a picnic as the restaurants looked to be very popular – I hear the fish and chip shop is fabulous – and there were plenty of picnic tables around. I highly recommend a picnic, though there are also places to buy drinks and extra snacks.

A walk back up the canal looking at some old barges, and we were back on the High Street and ready for a trip to the sweet shop. We had a few minutes eating them before we moved on. The gentlemen in the old fashioned suits stood in the street I assume were staff members of the Black Country Living Museum and not just random visitors, though kudos if they were. 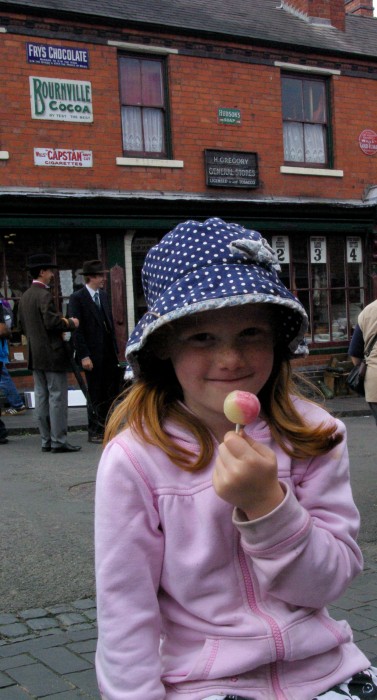 A few more shops to look at – this time we saw inside the radio/wireless repair shop, a tobacconist (which confused the children even more), and a motorcycle shop.

Upstairs there were some domestic rooms set up in the style of the 1930s, which I loved. I neeeeeeed wallpaper and a fireplace like this.

Inside the Worker’s Institute, not only is there a cafe, but also an exhibition about the workers of the Black Country, and historical events such as the chain maker’s strike of 1910. The 12yo enjoyed learning about Mary Macarthur and her crusade to get the women of the chain making industry better working rights. Here, there are lots of old photos of real towns and villages of the local area. We spent some time chatting to a member of staff who was very knowledgeable about local industrial history. 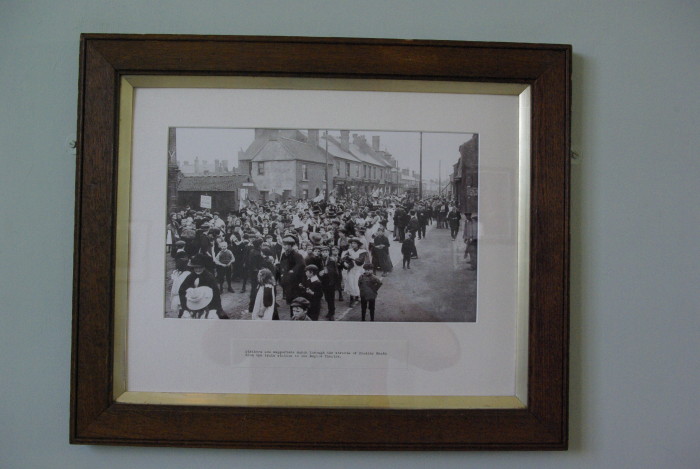 The girls enjoyed looking around the Tilted Cottage, mainly because it had a garden with chickens and pigs. It was good to discuss why people would have kept animals.

Not being able to contain the whirlwind of excitement any longer, we went to the fairground. All the rides here cost extra – you have to buy tokens for £1.50 each from the booth. The rides we went on were 1 token each, but some attractions were two tokens. We went on the junior swingboats (the twins were gutted to be too young for the big ones with ropes), the traditional cake-walk, and the super speedway carousel, which was indeed very speedy. I think the organisation could be better at the fairground and the rides a little cheaper, but the children enjoyed it nonetheless. You can also avoid any queues at the other cafes by buying your much-needed tea or coffee from the stall here.

We really wanted to go down the mine but the queue was over 30 minutes by now and the sun was getting a little unbearable at times, so we decided to come back later. Instead, we went to find the free family craft activities, which we found at the back of the museum behind the railway lines. Here we could do one activity each – the choice was between a traditional bookmark printed with letterpress letters, or a more contemporary monster bookmark. The children really enjoyed this as they love crafting, and they wanted to do more.

Our last activity of the day was to get a ride on the bus. The girls were fascinated with the doors at the back which were ‘open all the time’. It made me feel old as I remember buses like this in my town with a conductor on too. To the girls, it would be like some sort of parallel universe.

Once we’d got on the bus and made it back to the top of the museum, we stayed on and went round one more time – it takes five minutes at the most. Then we got off, and got on another one which was like a charabanc with a canopy. They loved this!

Back to the main entrance and out through the gift shop.

We loved the Black Country Living Museum as it was a fun way of experiencing history without everything being behind glass. It was busy in places and we were disappointed not to have gone down the mine, but there was so much else to see. The funfair was not a cheap addition to the day but the children loved it. Well recommended for all ages.