Ripley Caravan Park is a few miles north of Harrogate in North Yorkshire. We stayed here for three nights in August 2013. We paid about £25 per night for six of us, for an electric grass pitch.

Ripley Caravan Park is a pretty big park, mainly consisting of static and touring caravans. There is a nice but small indoor swimming pool (which costs £1/£1.50 extra per person), a play park for children, a shop, a duck pond, an indoor games room (table tennis etc), an indoor toddler play area, and a sports field for ball games.

Our two tents were all on their own at the end of the sports fields, with a line of trees separating us from the rest of the park. It was lovely. There were cows in the adjoining field and we thought we might get a lot of noise from them early in the morning, but we didn’t. 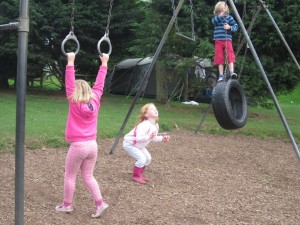 Ripley Caravan Park is very family oriented. Most of the other campers were families and groups. Up until around 10pm it was very noisy. The park was chock full of children up until night fall. There were BBQs going and music playing well in to the evening. But then, at bedtime, silence. In fact, despite all the noise and bustle of the evening, it may have been the quietest site we’ve ever stayed at, considering how many people were staying there. 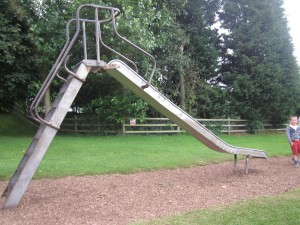 My only complaint was the toilet block. It was a very nice toilet block – loads of toilets, showers, sinks, a hairdryer or two (for 20p), a baby bath. There were washing up points, and a laundry room. The water was lovely and hot, and the block kept very clean throughout the day. It was just too far from our tent pitch for us, especially with young children. It doesn’t make sense to site the tents (which are not likely to have their own toilets) the furthest away from the block, and site the statics and tourers (which are more likely to have their own toilets) nearest. But that was our only gripe, and one which won’t matter once the children get a bit older.
Oh, and there was a fish and chip van on the Saturday night with the longest queues ever, but the food was lovely!
Overall, the site was really nice, obviously well looked after, and great for young families. We would highly recommend.
For more information, please visit their website at Ripley Caravan Park