Today, we took a step back in time with a ride on the North Yorkshire Moors Railway. During half-term, the NYMR have been running a teddy bears picnic event during which all children who bring their teddy for a jaunt get to ride for free!

The NYMR runs through a most beautiful part of the world, and the scenery is simply amazing. 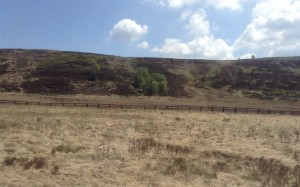 We grabbed our toys and headed off. We set off from Pickering, which is a few miles north-east of York. We got there at 10.30am and the car park was already full. We got in to the overflow car park, which is a five minute walk (or ten if you have little legs) from the station. It costs £5 for a day ticket. Be warned though – when we passed just after 11am, that was already full too. There is pay and display parking in Pickering town centre a few minutes walk from the station that you can use instead.
Access to the train from the car park entrance is by footbridge, but you can get a pram or wheelchair round the end of the line – it adds a couple of minutes to your time, so factor that in.
We got the 11am train to Whitby (trains were running hourly today). It was very busy, but we managed to get our double buggy on with help from one of the many volunteers who run the line, and with a bit of shuffling about inside, managed to sit together.
We got off at Levisham, which is the first stop for the teddy bears picnic. The event was a no-show though, which was disappointing. I think we misunderstood the whole picnic thing, but we had a good run round and watched the train depart, had our picnic anyway, and waited for the next train to take us along to Goathland. 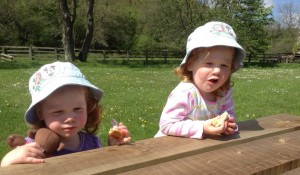 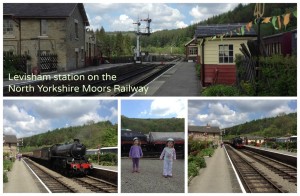 The train was a few minutes late, which the station person told us it would be, and it came, and we waved to everyone on it, I think. We did a lot of waving today. We were helped on the train, this time putting the pram in the guard’s van and, with a little help from the train staff who brought our forgotten bag to us (oops), found some seats in the same carriage. This train (the 12:00 from Pickering) was HEAVING – full of older couples and families enjoying the sunny weather.
The train ride itself is fab. The engines are swapped about for a bit of variety but they are mainly steam trains, all of which have been restored by the staff and volunteers. The carriages are very old-fashioned and very well-maintained. There is a refreshment trolley which does the rounds too, and you can take a picnic on if you want. Like usual trains, but with staff who smile and are actually helpful.
We got off at Goathland. This train station is the most popular on the line seemingly, and is a favourite with fans of Harry Potter (the station is used as Hogwarts train station in the movies) and Hearbeat (as Goathland has been used as the outdoor setting of Aidensfield for many, many years). 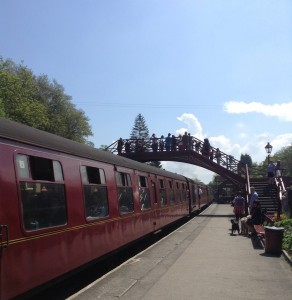 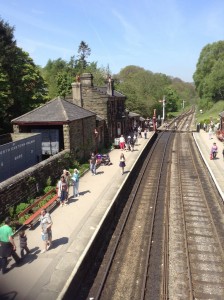 We had a bit of a look around, and then took a walk into Goathland village. We had an ice-cream we bought from Aidensfield Garage (which is a gift shop by day), and had a little pootle round the souvenir shops which live in Aidensfield Stores. 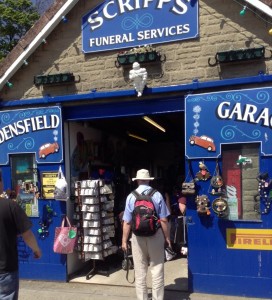 We found a little playpark at the end of the main drag with some of the best views I have ever seen. I could have sat on those swings all day long. 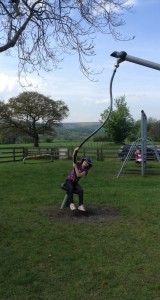 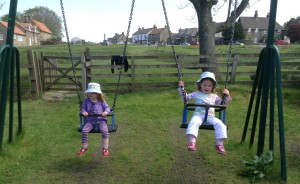 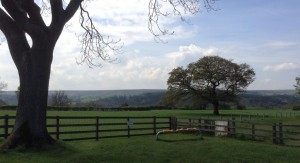 We found a Ford Anglia, like the one from the Harry Potter films….. 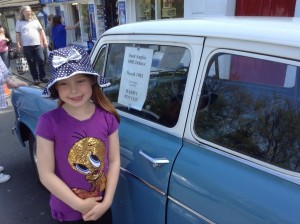 ….and then another Ford Anglia, which was an Aidensfield police car. 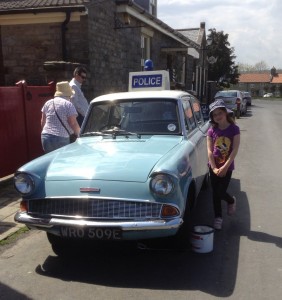 The toddlers were getting a bit tired, so we walked the quarter of a mile or so back to the train station. We stopped off to sit for a few minutes beside the stream that runs behind the station. 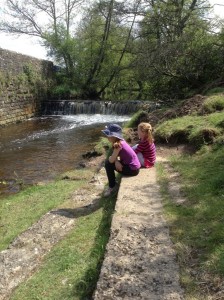 Then we caught the train all the way back to Pickering, but not after standing on the overhead bridge waiting for the incoming steam train to pass underneath us. Steamy! 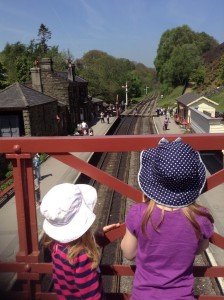 We had an eventful journey back with the overtired toddlers wanting to swap seats every five minutes, and wanting to try out the onboard toilet, AND wanting to eat ALL our biscuits, but the staff were fab, and the other passengers in good spirits, thankfully!
Then a few minutes walk back to the car park, and home. Shattered. We had a fantastic day, lots of fresh air and fantastic scenery. And our toys loved it too!! 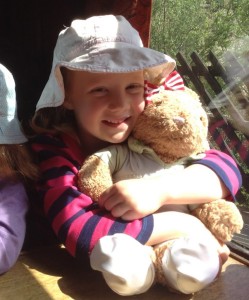 Under 5s are free! Buy a family ticket (2 adults and up to 4 children aged 5 – 15) and only pay for the 2 adults. There are special offers for different days too, please check out the website.

Dogs will be taken for an extra, small charge.

NYMR is exceedingly popular and, because of this, can get very busy. Be prepared.

Take a picnic – there are snack bars and cafes throughout the network and in the villages along the route, but they’re not all open all of the time – especially if you’ve got young children who can’t wait when they’re hungry.

There are toilets at most stations, and on board the trains. There are also loos in the car park in Goathland village.

The timetable changes throughout the year, and lots of different events to take part in – see the North Yorkshire Moors Railway website for more info.