The prospect of taking young children on a transatlantic flight, the associated jet lag, not to mention the fact that a holiday to Florida is expensive – these are reasons enough reasons to put most UK parents off attempting a holiday to DisneyWorld. But we’ve managed it twice now with our two pre-school aged children, and even though their memories may fade, we have all had a fantastic time.
There is a great deal to see in the parks which even very young children will love, and I’ve written a post on my own blog about our favourite attractions for small children. Although people of all ages enjoy Disneyworld, children especially soak up the magical atmosphere as they encounter familiar characters and stories. 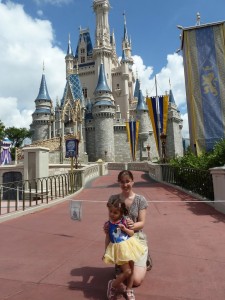 A Disney holiday can be hard work though, with long days and a lot to see, coupled with unfamiliar surroundings and unaccustomed high temperatures. Based on our experiences, I’ve put together a few tips that helped make our Disney holidays much more pleasant for us all.
• Arrive early! Queues will form at the entrance gates over an hour before the park opens. You don’t need to arrive that early, but allow plenty of time to make your way to the park entrance from your car and aim to be in the queue just before the gates open.
• Have a plan in mind before you go. Get hold of a map of the park you are visiting – they are readily available online, in various guidebooks, from elsewhere in the Disney resort  or in an app downloaded to your phone. Decide in advance which rides are most important to your family and head for those first.
• If an attraction has a FastPass ticket arrangement then that is one of the popular rides in the park. Either go on it first thing or use your park ticket at the machine to pick up a free FastPass ticket which will give you a timed slot to return. You can only take one FastPass ticket per park ticket, so choose carefully, and remember that the FastPass ticket allocation may run out towards the end of the day.
• If you have two or more adults and you want to go on a ride which your child is too small for, ask the attendant at the ride entrance for a rider switch pass. One adult can join the normal queue, and the other adult will be given a ticket which allows them to enter the ride without queuing again. This is a good opportunity for the non-riding children to have a toilet or snack break.
• Even if your child no longer uses a pushchair at home, consider taking one if they will still fit into it. You can rent one in the parks, or purchase one locally for around $20. You will need to leave it outside most attractions, so take a removable bag for valuables and tie something recognisable to it, as pushchairs are often moved about by ride attendants.
• You can take your own food into the parks, so it’s definitely worth at least taking your own drinks and snacks. Another reason to take a pushchair for carrying it all about!
• When looking at accommodation, consider staying somewhere close enough to Disney that you can return for a few hours during the hottest part of the day when everyone is flagging.
• Finally, be led by your child. If they are no longer enjoying themselves because they are too hot or tired, then no-one will have any fun. It’s better to have a few wonderful hours at DisneyWorld than an exhausting week with a fed up child.
Disclaimer – Jennifer and her family received complimentary tickets to the Disneyworld Parks. Advice is all her own.