This week we were invited to go and chat to Sir Ranulph Fiennes, so of course, we jumped at the chance.

We met with Sir Ranulph ahead of an event organised by Marie Curie so we could talk to him about his latest project – the Marathon Des Sables – to raise money for the charity, which exists to provide end-of-life care to people suffering from terminal illness. 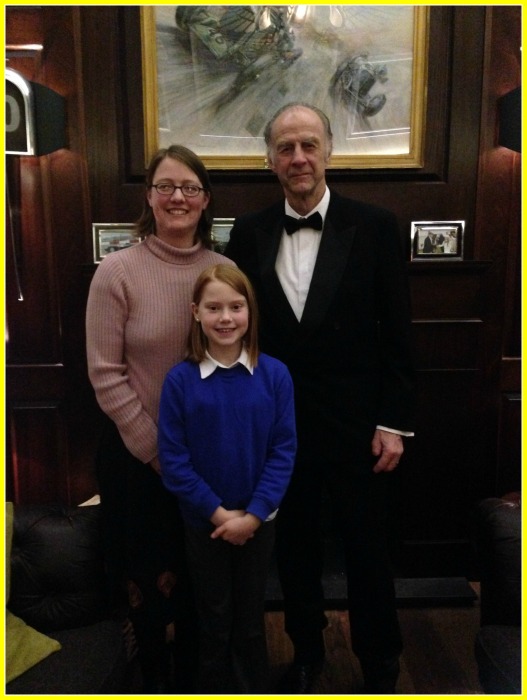 He was a very nice man, who’s led a very interesting life.

He was brought up in South Africa and England by his mother, his father having been killed during the war a few weeks before Sir Ranulph was born. Having met his first wife as a child, they shared a life of expedition and adventure together before she died from cancer in 2004.

Sir Ranulph’s passion for adventure and exploration has seen him atop Mount Everest, hovercrafting up the Nile, and at the North Pole. He has run seven marathons in seven days on seven continents, and now at the age of 71 is attempting the gruelling Marathon Des Sables from the 5th to 10th April, in the aim of raising £2.5 million pounds for Marie Curie. Assuming he is successful, he will become the oldest Briton to complete the challenge, which consists of walking/running 156 miles across the scorching Moroccan desert, no mean feat for anyone of any age.

He is reticent about his chances of completing the Marathon Des Sables. In all honesty, he has no idea how he will cope with the intense heat, and sheer length of the run. He explains that he understands that heat has an exponential effect on older people, and while he has been doing lots of training for the event, nothing can really prepare you for it, even with a history of military tours of Oman.

It is the toughest foot race on earth, but Sir Ranulph explains that it won’t be too bad really – they have helicopters, nicknamed ‘vultures’ which bear in and get you out of there if you look like you’re struggling. They’ve also got a good track record, he points out. Only one person has ever gone missing – a sicilian Olympian who disappeared for 11 days – but he showed up in Algeria, so that’s ok then!

In a race where you have you take all your own food and water for the expected six days it should take, Sir Ranulph recommends a good pair of track shoes that don’t let in sand, and a hat. Sounds sensible to me.

Ranulph’s relationship with Marie Curie started when his wife was being cared for by ‘brilliant’ nurses in the NHS hospital and hospice. He later found out they were from Marie Curie, and decided to switch his main charity from the British Heart Foundation, for whom he’d already raised over £2million, after life-changing double bypass surgery in 2003.

Ranulph’s decision-making over which charities to support is pretty simple. There is a huge influence from sponsors who fund his participation in certain projects – he knows that you can raise more money if you work with a charity that sponsors are willing to help, but also he likes to work for charities that know how to make the most of the PR opportunity that these events can be and are able to turn this PR into donations. Marie Curie, it would seem have impressed Sir Ranulph with both their effectiveness in using these opportunities to their maximum, and the ‘brillliant’ care and support they afforded his wife Ginny at the end of her life. Right now, he is putting himself through yet another challenge to raise money which will be used for such things as training more specialist nurses.

What you’re all desperate to know though is if he finds his young daughter or a throng of soldiers easier to control. Yes, that’ll be the soldiers. His daughter is unimpressed by her father’s status as the world’s greatest explorer, shunning him for pop concerts, ballet, and Lego – sounds pretty normal to me.

As Sir Ranulph has admittedly pipped me in the exploration department, I asked him about his days out memories from his childhood. He talks of adventures in the woods below Table Mountain with childhood friends, and play times which comprised of them all flinging pine cones at each other, and whippings with bamboo, shielded only by dustbin lids. Such fun! He talks of the terrible trouble he got into when transferred to a school in England, and he tried introducing his new classmates to his favourite game. Not so much fun.

We loved meeting Sir Ranulph Fiennes and are grateful that there are people like him putting themselves through challenges to raise money for a cause that is close to our family’s heart.

Please watch the videos, and follow Ran’s progress on social media with #runRanrun

You can support Sir Ranulph in his fundraising by visiting www.justgiving.com/ranulph or Text RUN to 70007 to donate £5, you can also include a message of support to Sir Ranulph in this text.

You can find out more about Sir Ranulph’s attempt to complete the Marathon Des Sables at https://www.mariecurie.org.uk/donate/ranulph-fiennes-marathon