On Sunday, I had a little child-free day out of my own. To Doncaster in South Yorkshire. I know, right? It’s not the most glamourous of towns, but then I’m used to that. It wasn’t to do anything particularly adventurous, well unless you call walking at a steady pace through the town centre adventurous. There wasn’t even a prize at the end of my walk. So why did I bother?

Well, I was asked, as part of #TeamHonk, to go and accompany Jo Brand on a relatively short stretch of her One Hell of a Walk from my home-town of Hull across the Pennines and on to Liverpool – 150 miles in seven days.

We’re waiting for Jo Brand at the secret location. Watch for us walking through Doncaster very soon #GoJo #teamhonk #sportrelief

We (myself, Penny of AResidence, and Leyla of ThisDayILove) headed up to Doncaster Racecourse where we met some of the crew supporting Jo on her epic walk, and got to learn a little about the skills and planning which go into a large event such as this. We met the official navigators, the camera and sound crew, and the steely-thighed men who will ride the camera rickshaws the entire length from coast to coast. As someone who cycled only from Hull to Selby as part of #TeamHonk in 2014 with only myself as baggage (and a very honky horn) I am in awe of anyone who can do this and more, and laden with a two-man crew and several pieces of essential equipment.

Jo was a little over schedule coming in from the east. We understand that the previous afternoon in particular had been hard going, terrain-wise. Jo has been out in all weathers, on a variable mix of terrains – everything from nice smooth tarmac to peat bogs, and sodden muddy paths had been conquered – and on days when the light fades at around 4pm, Jo has been walking from around 7am in the morning, to 9pm in the evening.

She is getting fatigued we hear. Not only from the 12 – 14 hours a day walking, but from the sheer relentlessness of it all. The media calls, the abuse she occasionally gets from rude passers-by, the mental and emotional endurance alongside the physical. We understand it’s the mammoth support that is keeping her going, and the knowledge that she is raising money for a cause which is helping out so many projects, including some which she has visited en-route. If she is fatigued in any way, she’s doing a good job of showing that her spirits are up.

Jo’s celeb friend and companion for this stretch was to be Gabby Logan, TV sports expert, former gymnast, and notable Strictly contender. We all waited in the grandstand of Doncaster Racecourse for Jo to arrive – and she did! Accompanied by a team of people from the local BT centre, one of the sponsors of Sports Relief, followed by some lunch, she readied her feet (not for the first time I would imagine), and we all gathered out front, much to the delight of fans who had information of where her pit-stop might be, and to the bewilderment of those who’d just turned up for the antiques fair in the main hall and were, up until then, blissfully ignorant of anything unusual happening at all.

So off we went. Jo, Gabby, and Sports Relief stalwart Greg Whyte following the expert navigators and the camera rickshaw, through the streets of Doncaster, onto the town centre, and through the other side to the suburb/village of Hexthorpe. We passed people who’d pulled over to say hello and take photos, the odd local who’d decided that shouting abuse was a good idea instead, and a couple who having seen the local shouting the abuse, told Jo with a laugh “Welcome to Doncaster!”

Then we were stopped so someone could give Jo a cake. They’d just bought it for her Mum as it was her birthday, but they gave it to Jo instead. Mum didn’t mind. They said they’d go back and get another one. Mum was wished a happy birthday from Jo, and we were on our way again. The support bus, which was keeping up with our ambling pace, took on board the cake and we never saw it again.

Not that I’m accusing anybody of anything. Not at all. We stopped traffic in order to get the group across the road, the drivers sat in amazement as Jo Brand and the team they’d seen on the news passed over right in front of them. We were honked and waved a few times, people had phones out taking photos – maybe to show to friends and family who may not have believed that on a drab Sunday afternoon, a celeb and national treasure was there in their town. Some people were so surprised, they almost dropped their chips. Welcome to the north, indeed.

As the sun set, we approached Hexthorpe over one of Doncaster’s many railway bridges, and down the other side, we encountered some ladies who had set up a tea and cake stop outside their church. I have no idea whether this was planned or not, but stop we did, and enjoyed a little refreshment, albeit for a short time.

Jo and Gabby were told we would be leaving them soon so quickly made sure to talk to us about our involvement with Sport Relief. We told her about the end-to-end relay in 2014, and the Comic Relief Danceathon in 2015, and said we had some plans for this year too. She was thrilled with the fudge that #TeamHonk had sent for her. We didn’t see that again either. She thanked us for joining her and we wished her well for the rest of the trip. The rest of the trip that was soon to involve the Pennines (both up and down), and the long slog to Liverpool. 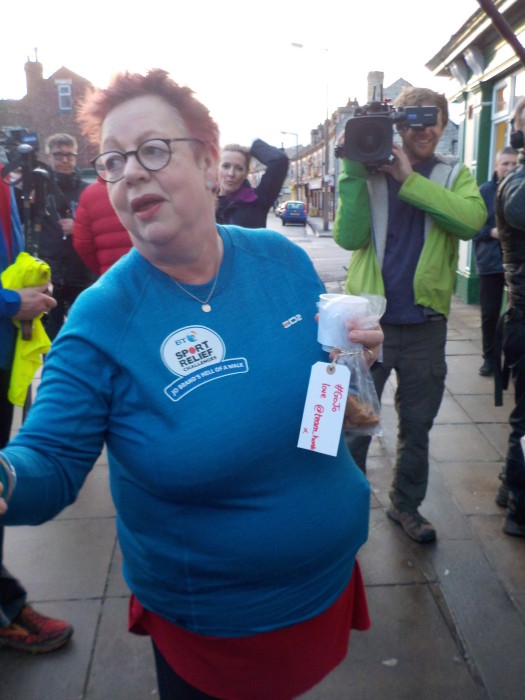 We waved goodbye to Jo, Gabby, Greg, and the rest of the crew. And the ladies of the church offered us more tea. The north is a wonderful place. I hope Jo enjoys her time in the north, and thinks that we have been supportive and not as hostile to southern softies as she feared. Of course we have been supportive. People have been out in their droves, and rightly so. She is amazing and deserves every bit of those cheers and claps. And cakes.

Jo Brand is walking 150 miles in seven days from Hull to Liverpool in aid of Sport Relief. It’s a tough challenge for anyone, particularly for someone not very sporty. For former athletes like Greg it’s less of challenge. For Jo, it will be a week she (and her poor blistered feet) will never forget.

To learn more about One Hell of a Walk and to sponsor Jo please visit http://www.sportrelief.com/whats-going-on/jo-brands-hell-of-a-walk

Want to know what’s going on with #TeamHonk this year? Well, I might know a little but not the whole thing. You can find out on February 1st – watch out on social media for the official announcement and how you can be involved. The news will be posted up on the Team Honk website

You can raise money for Sport Relief yourself by either joining in an official event, or organising your own. More information on this can be found at http://www.sportrelief.com/events

To see Penny’s take on our urban adventure with Jo Brand, pop over to the AResidence blog, and for Leyla’s report, visit This Day I Love