Bridlington Birds of Prey and Animal Park is in the Park Rose complex just outside of Bridlington at Carnaby. It used to be known as the Park Rose Birds of Prey Centre but has expanded recently and undergone a full rebranding under owners Carl and Claire. We went to visit this week to see what had changed and to meet the new animals. 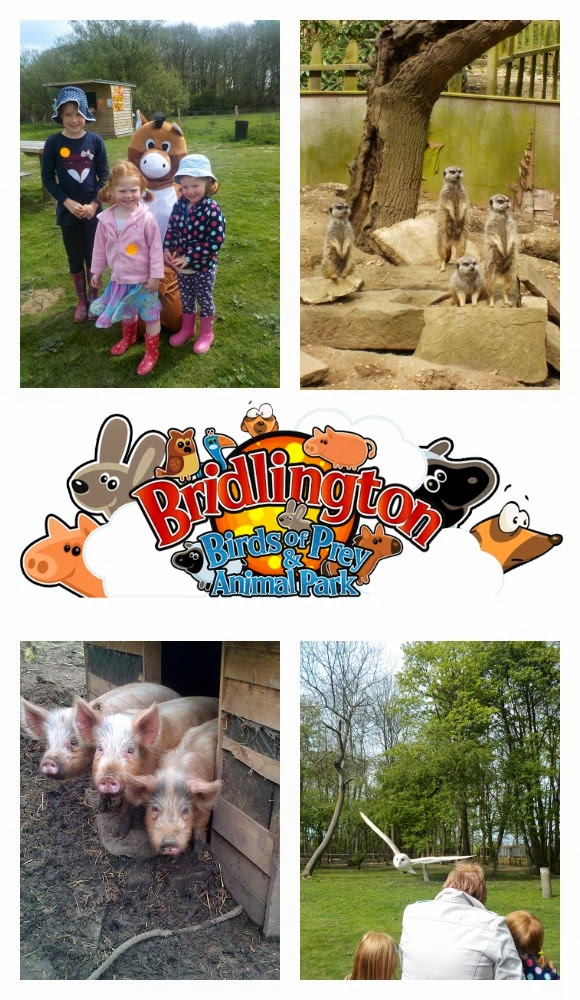 Birds of Prey and Animal Park Bridlington is family-run and very friendly. It is not too big with a nice selection of birds and animals. The expansion includes a new children’s playground with sweet kiosk, a paddock for goats, donkeys, and alpacas, and a pig race track.

They run a schedule of talks and activities, with more activities on weekends and school holidays. These include small animal handling, a birds of prey demonstration, and a wallaby talk. On arrival we were straight into the 12 o’clock small animal handling session and we joined the queue to stroke a large but friendly rabbit.
Then we explored the park. There were pigs galore, who were very grunty, and some noisy sheep. We really liked the meerkats, who have their own mound in the park’s centre.

Out the back and we spent a lot of time on the new children’s playground. There are two parts – a challenging obstacle course suitable for children aged five and over, and a collection of little houses for the younger ones to explore.

We stopped here at the picnic area, which although is a bit exposed, has ample table and chairs and a little kiosk for crisps, drinks, and sweets. During our lunch, we got a visit from Danny Donkey. He’s not a real donkey but one of the park’s characters, and the children loved having their photo taken with him. 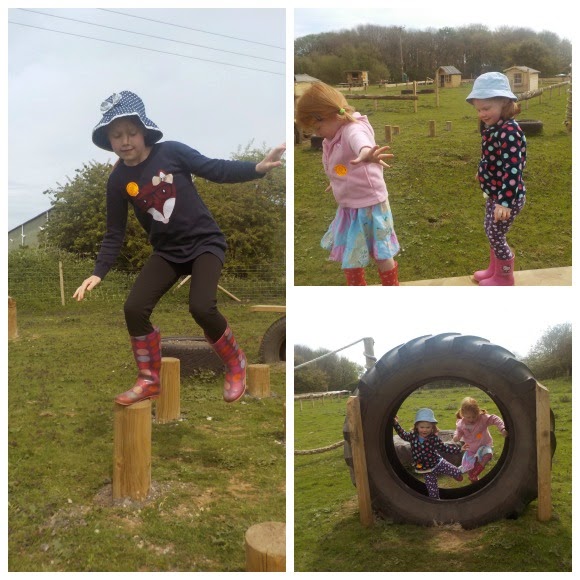 After our picnic, we went off to feed the goats, donkeys, and alpacas. They were very friendly and the goats’ tongues were very tickly. You can buy food at the shop/kiosk for 50p a bag. 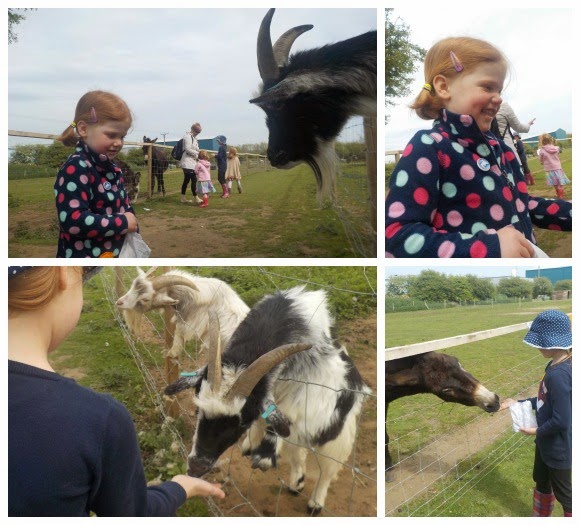 At 1pm there was pig racing, which involves four pigs and volunteers, young and old. One of the volunteers leads the pigs round with a feed bucket, while others shepherd the pigs from behind. It shouldn’t be funny, but it is, especially when Grandma volunteers herself to carry the feed bucket. Cue obligatory video!
Once the pigs had eaten and we’d collected our breath, we went off to visit the remaining animals, which included a wallaby with a joey in her pouch, a pair of raccoons, and a collection of birds including a hawk and different owls.
At 2pm, we watched the birds of prey demonstration where Carl talked to us about the different birds at the park and we watched them in action. Carl got them to fly low over our heads, and in between the rows of benches. Someone occasionally got clipped by a wing. Everyone was too nervous to move too much, and it was a lot of fun. A bit too long for the very little ones, but my older children (aged 9 and 6) thought it was brilliant. 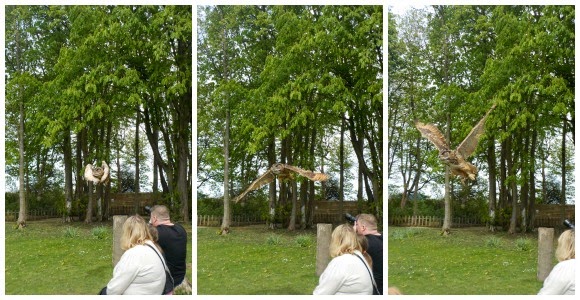 Straight after, we hung around for more small animals, which included a guinea pig, and the rabbit. Carl brought out a baby owl. It was huge! It was 30 days old and almost as big as a grown-up owl, but much fluffier. Carl explained that they didn’t yet know whether it was male or female, and that it would soon get its grown-up feathers. He/she tried grabbing our fingers when we went near it, so Carl let it chew on his finger while the children had a bit of a poke. He then took it out and let it go for a little walk, where it investigated our shoes. Very cute! 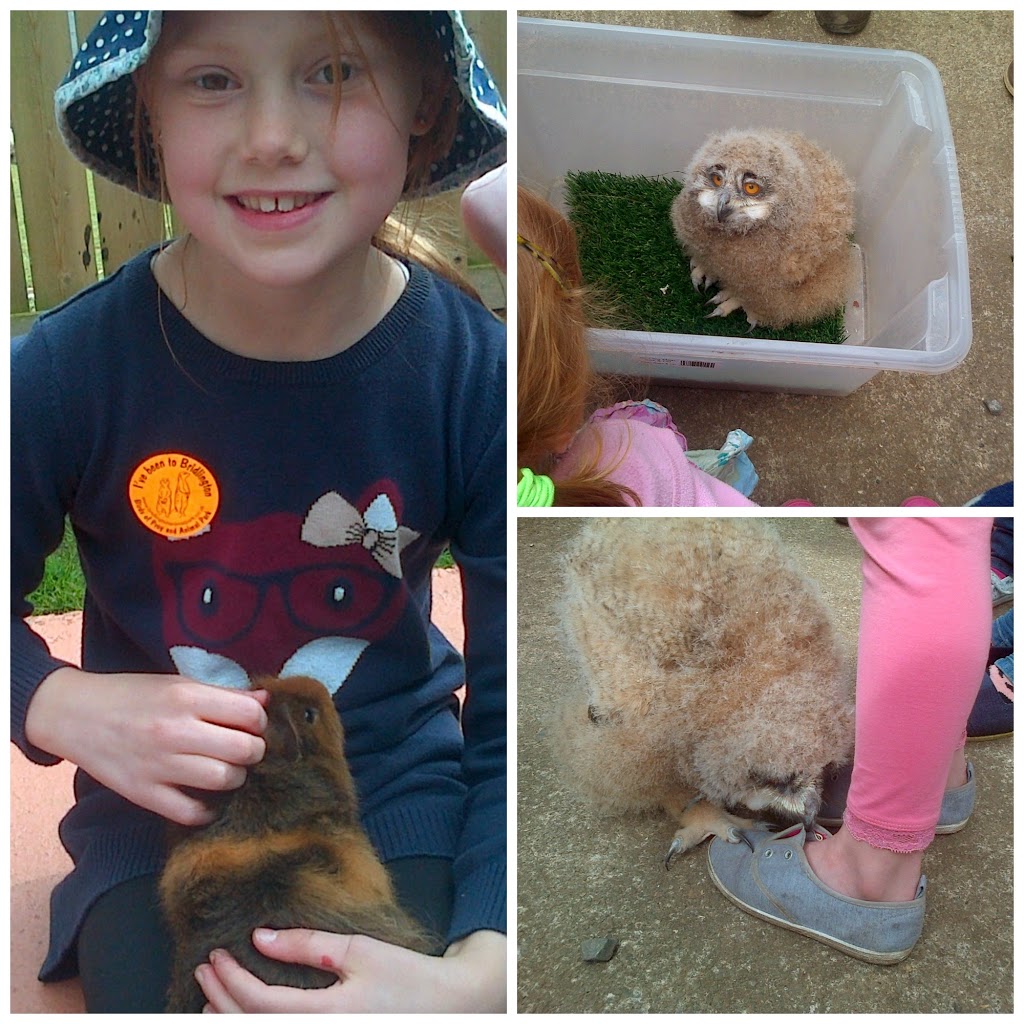 Total trip time – three hours
Facilities
One toilet in the main block, which doesn’t sound like a lot, but it’s not a huge park and even on a pleasant bank-holiday Monday was more than enough for the number of visitors.
A small gift shop/reception.
Verdict
Wonderfully peaceful and ideal for small children, this is a friendly and welcoming place with opportunities to get up close to the animals and participate in activities. A bit bumpy in places for prams, but all on one level and well maintained.
Parking is on the main Park Rose complex a stone’s throw from the animal park. Park Rose is signposted off the A165 south of Bridlington.
For more information, please visit their website at http://www.bridlingtonanimalpark.co.uk/
Disclosure – we were given a family ticket in return for this review