So why should you visit Hull?


Because you can visit the home of William Wilberforce. It is now a museum of his life, and of the slave trade he worked to stop.
Because there are all sorts of free museums, including Streetlife Museum, Hands on History, and The Hull and East Riding Museum. The Ferens Art Gallery is also free, befitting its benevolent benefactor Thomas Ferens, a founder of the international company now known as Reckitt Benckiser, and an MP who fought for the rights of women and girls in the colonies.
Because we have never forgotten our cultural heritage and our strong links to the sea. We are proud of our world famous pavement fish trail, our Maritime Museum – housed in the building that was once the offices for the administration of eastern European migrants, helping them on their journey to a new life – and The Deep which shows our appreciation for fish, built on soil where once stood walls that protected our small, strong coastal town from attack.
Because our hotels and staff have the welcoming character in abundance and there is a growing choice of places to stay.
Because Hull is still one of the cheapest places in the whole of the UK. You can dine like a king and not need a king’s ransom. We don’t do kings here. Check your history books (or Google) for King Charles I and how Hull played its role in the Civil War of the 17th century if you don’t believe me. Hull has the red of Labour and working-class democracy at its core.
Because you can visit places like The Grafton Pub, The Welly, Blue Lamp, and Adelphi and see where people like Paul Heaton and Norman Cook, Everything But The Girl, and David Bowie’s Spiders From Mars would have stood and played.
Because you can take a trip to the theatre and see local culture at its best – the revamped Hull Truck Theatre is amazing and Hull New Theatre, a 1930s design which mercifully survived the attacks from the Lufftwaffe, has been faithfully hosting a range of home-grown and visiting professional and amateur shows for almost 100 years.
Because its the only place in Britain you will find white telephone boxes. True fact. We don’t need no BT here, thank-you very much.
Because you can play for hours in the free public parks. Our personal favourites are East Park and Pearson Park. Pearson Park being the gift of another great Hull philanthropist Zachariah Pearson, an international entrepreneur who eventually lost his fortune but had the sense to gift the land first.
Because we have the largest travelling fair in Europe which draws visitors from the rest of Yorkshire and beyond. You’re not from Hull if you have never had a bag of chips from the Bob Carver’s stall and taken a spin on the waltzers until you feel sick.
Whether Hull becomes the UK’s next city of culture is, for now, an unknown. We were rank outsiders. This year’s better-than-ever Freedom Festival and the roar that Hullites are making in the media, both online and off means that we are not outsiders any more.
You should visit. You really should. 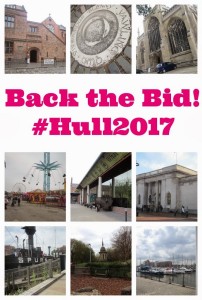 The City of Culture 2017 will be announced in November 2013. For now, you can follow the progress of Hull’s bid on Twitter @2017Hull and on Instagram using #Hull2017. For more information, please visit Hull City Council’s website.

This article has been written to recognise the author’s contribution to travel and tourism by Avis Car Hire on the A-List Awards 2013.