On Sunday morning, we were up and out the door very early because we had a date with some Aliens! Seriously. We were off to see Aliens Love Underpants, based on the book by Clare Freedman and Ben Court at The Assembly Halls in Tunbridge Wells. We’ve had this book a few years and it has become a favourite bedtime book of ours, so the chance to see it transfer to the stage was very exciting indeed. The kids had a good read of the book before going and all the way to the theatre there was constant talk about PANTS! Pants are a hot topic in our house, with a certain little boy’s reluctance to wear them at the moment, or at least reluctance to keep them dry! 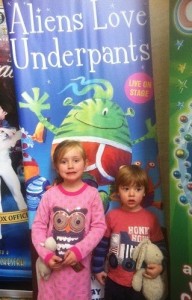 So, on to the show. It started with all the actors on stage wearing ‘I LOVE Pants’ t-shirts and they were asking members of the audience what their favourite pants were. Isla was thrilled to be asked about her favourite pants and she told them she liked “Flowery pants”. This was relayed to the stage and then back to the audience. We had a good giggle at that and Noah told me personally that his favourite pants are ‘Thomas pants’. Awww. I loved the way the show started – interaction with the kids at the beginning really helped to draw them in, they were all shouting out and it made them all laugh.

I was intrigued to see how the story could be made into a show and so after the quick poll of the audience about pants the story started in a school room with a teacher talking about space to 3 students. I personally loved this bit – I loved the song – it had a real 60’s vibe to it and the projections of space behind the actors was lovely. From that point onwards we follow one of the school boys home to his mother who is hanging out the pants on the washing line. If you know the book then you’ll know what happens to the pants! The boy is really interested in space and we see him daydreaming about space and going on an unbelievable adventure.

I won’t spoil the storyline but I want to mention some stand out parts for us. There is more interaction throughout the show, which again the kids loved. In the ‘Pants R Us’ shop scene, the children were encouraged to shout out which colour pants the mum should buy to replace all the pants the aliens had stolen. The song in this section was really fun, with an American line dancing theme to it. It’s so important that the kids are able to interact.


The aliens are puppets, with the show’s actors operating them and walking around the stage with them. You really do manage to forget that the actors are there and just focus on the puppets. It’s something that we’re used to seeing as Peppa Pig and Room on the Broom worked in the same way. The puppets are great, and look exactly how they are in the book. Our favourite one was the tiny little yellow one that was in the pant drawer!

The songs are really catchy and I would really like to know if there is a way to buy them as I know the kids would love to sing them at home, they were singing the songs in the car all the way back. I couldn’t see a CD in the merchandise area at the end. The effects in the show are lovely, when they go into space the backdrop is covered in stars, it looks really magical for the kids. The set changes are swift and mostly done as the actors are talking, so there are no boring bits where the kids have to wait for things to happen. And lastly, the actors are brilliant. The way that they make quick costume changes and also skillfully operate the puppets is fantastic.


So there you have it. We really enjoyed Aliens Love Underpants and the kids haven’t stopped telling people about seeing it since Sunday. I say that is a recommendation in itself.

The show runs for 55 minutes with no interval, so bear this in mind if you have younger children, Noah is only just over 2 but he’s a bit of a seasoned theatre go-er now, with a couple of shows under his belt. Check for tour dates at Aliens Love Underpants and you can follow on twitter: @underpantslive and on facebook: https://www.facebook.com/aliensloveunderpants

Disclosure – We were given 4 tickets to see Aliens Love Underpants. All words and opinions are my own.

This is a guest post written by Sharon Donnelly, blogger at I Heart Motherhood. Sharon has 2 children, Isla aged 4 and Noah aged 2. She’s a working mum, who started her blog to document the things they do as a family and as fun way to record bits and pieces of Isla and Noah’s childhood, from the big stuff like starting school, to the little stuff like buying their first pair of shoes. Its all important stuff 🙂