A mouse took a stroll through the deep dark wood. A fox saw the mouse and the mouse looked good.

If you recognise these opening lines then no doubt you have a Gruffalo fan in your family. And if you’re a fan of the Gruffalo, then you may have also read The Gruffalo’s Child. The story of The Gruffalo’s Child by Julia Donaldson has been brought to life by Tall Stories, and we were invited to go and see it live on stage at Hull Truck Theatre, and also to meet one of the cast. 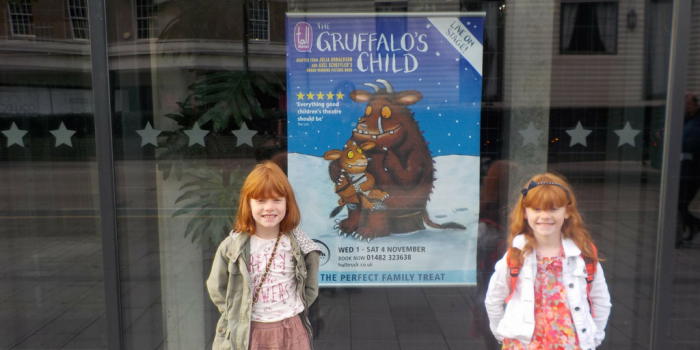 The Gruffalo’s Child tells the story of the night that the Gruffalo’s daughter decides to ignore her father’s warnings and explore the deep dark wood in search of the big bad mouse, accompanied by her toy ‘Stick Man’. Along the way, she meets and is outsmarted by snake, owl, and fox, but none are a match for mouse, who again outwits them all and lives to tell the tale. 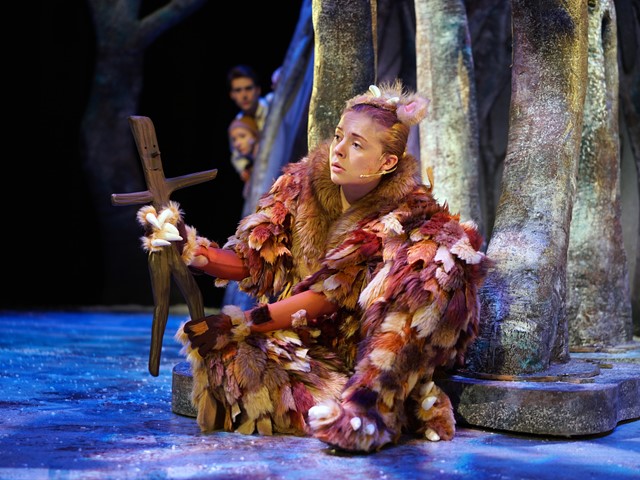 Tall Stories bring the story to life in this 55-minute play, complete with dance, songs and audience interaction. The cast of three work their way through the story playing all the characters between them with the minimalist set proving an effective background. My six-year-olds’ attention was held the entire time.

The play sticks faithfully to the story, with songs and jokes thrown in. It really does work very well.

The tour is in Hull until the 4th November, after which it moves on to Radlett and Cambridge before settling at The Lyric in London’s West End until the New Year. 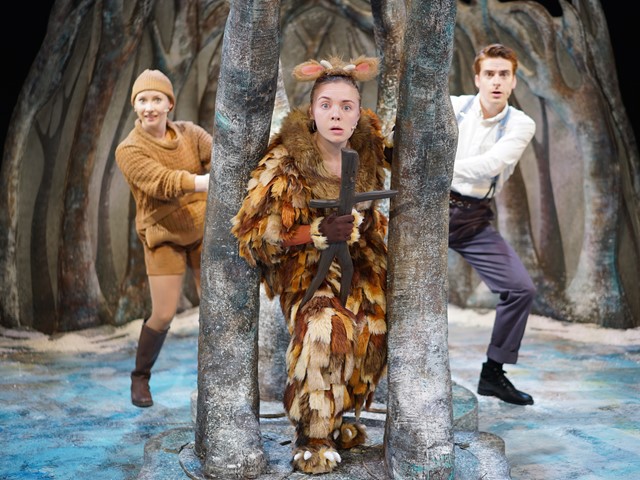 But what was even more special than us watching The Gruffalo’s Child? We also got to go backstage and meet Sophie Alice, who played the titular character. The twins were even more excited about seeing behind Hull Truck Theatre and meeting Sophie as they were about watching the show. And I think I was just as thrilled as they were.

We don’t get the chance to do a proper cast interview very often and we didn’t really have any questions ready. I thought it would be better to watch the show first and then ask whatever seemed appropriate. What actually happened was that Twin two decided she was going to ask Sophie about anything she didn’t understand, and it was hilarious. Sophie, if you are reading this, I apologise.

First off, Twin two, who was fascinated with the costumes asked Sophie how long it took her to make her Gruffalo costume. Sophie was lovely and explained that actually, a lady called Isla designs everything, and she gets a lady called Lisa to help her handmake everything, including the set. So the twins got a lesson in not only stage performance but also in stage production.

The next question was a corker – “How long did you practice for to learn to be a Gruffalo?” – Sophie said that for the tour two years ago they did three weeks of rehearsals, so this time around they only really needed a refresher of a few days and they were good to go.

Twin two was still a little confused as to how these things work and asked Sophie if they do the same thing every time. Sophie explained that the show is the same every time but in rehearsals, they do one scene one day, and then rehearse another scene the next day.

Twin two was on a roll. Twin one was quite happy demolishing the sweets she’d brought with her in her rucksack. Twin two asked if it’s always the same three people. Sophie explained that there is also an actor called Jake who can do every part, and that sometimes Sophie played the mouse, or someone else was the Gruffalo’s Child so Sophie could have a day off. Fascinating!

Aaaaaaand back to the costume obsession as Twin Two wanted to know if the costume was made of real leaves. Sophie explained that it was made of furry material and, contrary to the cold look of the set, was very very warm inside. With the lights and the running around, Sophie said she does get very warm very quickly.

Twin two could be a journalist when she is older. She then asked about where Sophie had been and found out that the tour has been to places such as Aberdeen and Southampton and it will soon be time for a stint on London’s West End, where Sophie is happy to be going as it will mean she gets to see her London-based family over Christmas.

I stepped in before Twin two could draw breath and asked Sophie how she’d got into acting. Sophie Alice started dancing at the age of three and studied performing arts at school and college, before going to East15 in Southend. She graduated in 2015 and has been with Tall Stories for two years. She also toured in Emily Brown and the Thing as Emily.

Twin one runs out of sweets and asks who plays the Gruffalo. Sophie points to the guy at the table eating his lunch. Twin one is confused as she knows that he was the man who played the fox, and possibly the snake. She didn’t realise he was the Gruffalo too and that all the parts that she saw in the story were the work of only three people. Isn’t theatre magic?

Last question and we’re back to Twin Two who rather bluntly asks Sophie if she gets money for being the Gruffalo. Sophie can confirm that yes she does get paid for her work, and says she is lucky that people are happy to pay her for doing something that is so much fun because some other actors are struggling and don’t get paid anything at all. Twin two adopts her serious face and thanks Sophie for her time.

A quick pic of us all and we’re done! 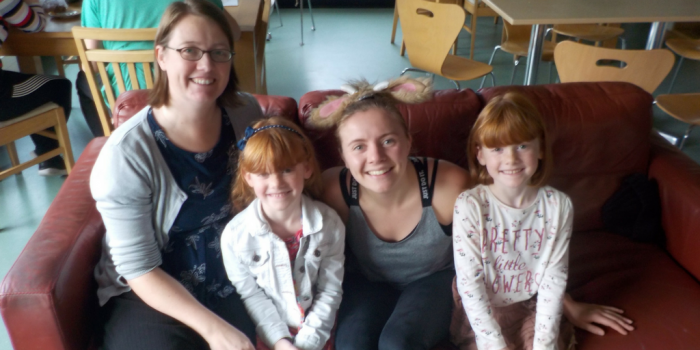 Thanks, Sophie! We hope we left you enough time to eat your lunch before your next performance, and that the twins didn’t put you off press interviews for life.

For more information on The Gruffalo’s Child and upcoming shows and tours from Tall Stories, check out http://www.tallstories.org.uk/shows/

Disclosure – we were guests of Tall Stories and Hull Truck Theatre