At The York Dungeon throughout Halloween 2013, accompanied children in spooky fancy dress get free entrance. (Please check the website for more details), so when we were given some adult tickets to try them out, we whacked some costumes on the kids and headed off! 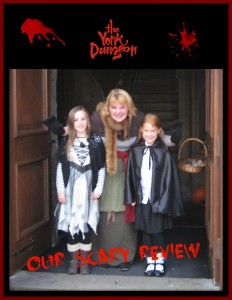 The York Dungeon is not recommended for children under 10 years old. The nine-year old and her friend were keen regardless, so we thought it would teach them something, one way or another! Actually, the 10-year old recommendation is about right. They were quite scared but not traumatised for life. I think. Fingers crossed
York Dungeon is an old building in York – not overly pram or wheelchair friendly – and is an attraction consisting of a group tour (about 15 to 20 people) taking in interactive rooms on the theme of the Vikings, Dick Turpin, and witches. The Dungeons use the history of York to entertain and educate.
In the words of my nine-year old……

“York Dungeon is a great place as a family day out, even though it is very scary! I went with my friend and our dads. I found it quite frightening and disgusting. A lot of blood was involved, especially during execution.

First up was the plague where the doctors assistant was hitting a man on the head with a hammer. There was a man sat in the corner of the room, pretending to be dead. There was a man laid on a bed with all sorts of yucky stuff, in which I’d rather not say!

The next room was… Guy Fawkes. Do you remember the fifth of November? Find out what happened to Guy Fawkes after he was caught.{eww!} after that it was time for…a walk to the Golden Fleece, at midnight. You may encounter somebody wanting to summon a spirit.”

The tour lasted a bit over an hour. It sounded quite scary in parts. The adults really enjoyed it, and said the acting and participation was brilliant!
There was talk of a lady being burned at the stake (fake fire, obviously) and a very one-sided trial in which my nine-year old was found guilty.
Overall, they had a great time, though I think the overgrown children enjoyed it the most! And they got out alive with heads intact. 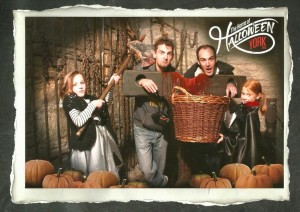 Exit through the gift shop? Of course!
Car parking is available in the usual pay-and-display York city centre car parks. The park-and-ride bus stops a few yards from The York Dungeon.
Book online for savings, or through Visit Britain.
For more information please check out the website of The York Dungeon

Disclosure – we were given adult tickets and a free official photo in order to do this review. The children got in free as part of the Halloween promotion.