One Saturday evening in January 2018, a German TV crew came to my house. It’s a normal house in a quiet suburb in East Yorkshire. We don’t make a habit of attracting three (very tall) Germans with industrial AV equipment, but that evening was a little bit different.

This is the story of how producer Stefan and his camera and sound guys ended up in our house.

There is a German #TV crew in my living room. Full explanation to follow on the blog

Back in November 2017, I was on the internet (I know, I practically live here) and I spotted a news item going through my feed on multiple networks from multiple sources – a story about a camera that had been washed ashore on the island of Hallig Süderoog off the west coast of Germany. They were trying to trace the camera’s owners, and they believed they could be an English family living somewhere around Thornwick Bay in East Yorkshire.

I thought it was a good story, and I’d seen it go through my feed so many times, I thought I’d better read it and watch the accompanying video, so I did. It did indeed look like Thornwick Bay, which is about 30 miles north of my home. And it was funny as the boy in the video looked a little like a boy we know. So I decided to share it on my Facebook page as I know there are a lot of Yorkshire parents following it.

Here is the story I shared from The Guardian, although I’d seen it shared everywhere that day from The Yorkshire Post, to our local BBC news station, to The Times. https://www.theguardian.com/world/2017/nov/30/camera-yorkshire-500-mile-journey-german-island-suderoog

I didn’t think too much more about it. Until a few days later when the boy and his family still hadn’t been traced, and the island’s Facebook page shared some more pictures, which again ended up on my news feed. And this time, I knew it must be William. So I messaged Helen, his mum.

Helen had been busy. She’d not been near Facebook for days. She had no clue what I was talking about, but it was definitely him. He’d lost his camera on a day out with Nanna and Grandad back in September. They were very cross at him for losing it. And here it was, miles and miles away, seemingly having survived a trip across the North Sea to Hallig Süderoog, somewhere where we’d never heard of before.

Then it all went a bit nuts. The BBC got in touch and the family found themselves on the local evening news. Mark, William’s Dad, contacted Hallig Süderoog, and then the German TV people got in touch. The story had gone mad in Germany, with hundreds of people having shared the story of the search for the mystery English boy.

Earlier this month, the German press flew William and his family out to collect the camera in person. They walked up to the island (no vehicles are allowed out there and groups have to be carefully managed) with a guide and a dozen or so camera crew and journalists.

They are now on various German, British, and International news outfits. Here is just one of the news items that was produced. I have no clue what any of it is saying, but I just love the images of our friends going on this wonderful adventure to meet total strangers to retrieve a camera that didn’t cost that much to begin with.

If you want to know what camera tech can survive weeks in the North Sea and still come out the other end able to spit out footage from its memory card, I’m afraid the company don’t seem to be selling them anymore – this is the nearest I could find from the same manufacturer, and it looks to be an improved model. It’s certainly more expensive http://amzn.to/2mVNZwT (affiliate link).

Anyway, the family enjoyed their fast and furious trip to Hallig Süderoog and meeting the couple who run the island, and their father who found the camera while the couple were on the mainland prepping for the imminent arrival of their new baby.

See, this story has it all!

This may be the first time you’ve ever heard of this at all but it has gone bonkers in Germany. Now, the TV people are making a documentary feature. Something along the lines of The One Show. And they’re over in England to tell the story from the English perspective. They’ve taken the family back to Thornwick Bay, and done some shooting of William and a friend in the streets where they live.

And here I am on a Saturday night, sat in my living room, pretending that it’s November all over again and I’m seeing William’s story for the first time, with a camera in my face and a boom over my head. I have to act surprised (I can’t act, and I don’t do surprised) and do the cheesy pointing-at-the-screen thing. They took over half an hour to shoot me from multiple angles, including from outside the house, and I’ll (thankfully) only be on for a couple of minutes, and (comically, hopefully) dubbed in German.

Tomorrow, they do some more filming with the family and then fly back over to Germany.

With a bit of luck, not too many people over here will see the finished product. My acting was hopeless. I don’t think I’ve missed my calling, to be honest.

I don’t know how to end this little tale, which is quite fitting because the story has not yet ended. There’s more to come – the documentary feature will likely air in Germany in March, after which I might have Hollywood knocking on my door, though I think it’s unlikely.

Recently I was asked what interesting and exciting things I’ve done because of blogging. I’d say being filmed in my own living room by a German TV crew is up there.

This is my favourite image from the family’s trip, courtesy of Associated Press, and if you recognise Mark and Helen, they were part of Team Honk back in 2014 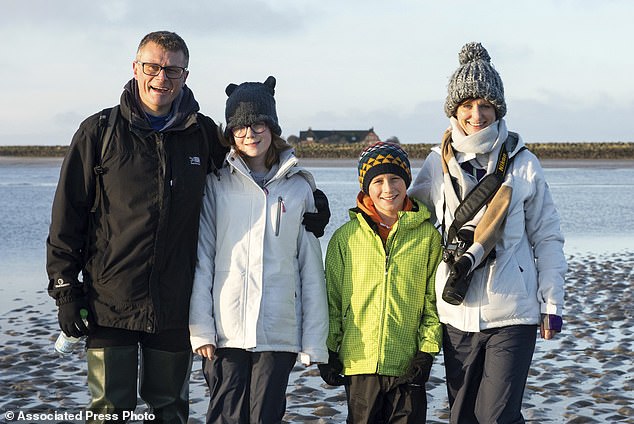