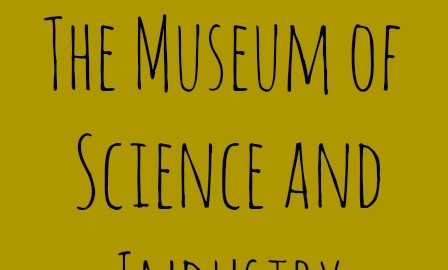 The Museum of Science and Industry in Manchester (also known as the MOSI) is one of the free museums managed by the Science Museum Group. Like other museums in this group (The Science Museum, and the National Railway Museum in York), it is huge and there is a lot to see and do for all ages. Did I say it was FREE?

The day we visited (during October half-term) it was very busy. There were a few mobile exhibitions and activities on as well as the usual selection. There was children everywhere but the museum’s space and numerous things to do meant it didn’t feel as crowded as it could have done.

Our first stop was to each have a turn – including Charlie the school bear – at taking a selfie to go on the array of screens in the atrium. 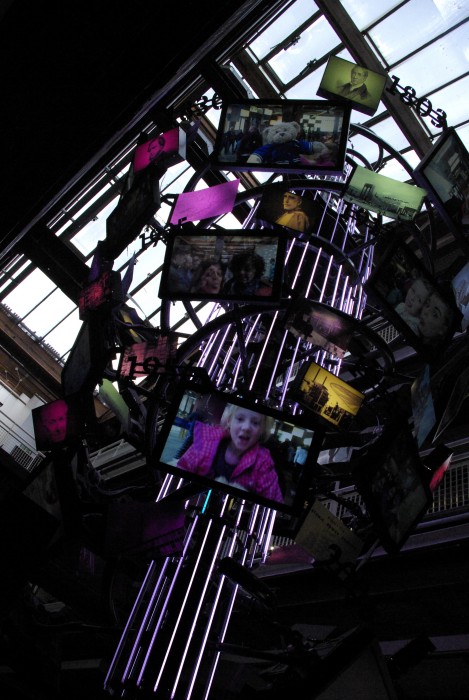 Manchester Science Festival was underway during half-term, and we joined in the activities provided by Electricity North West to help us learn all about energy use and conservation. 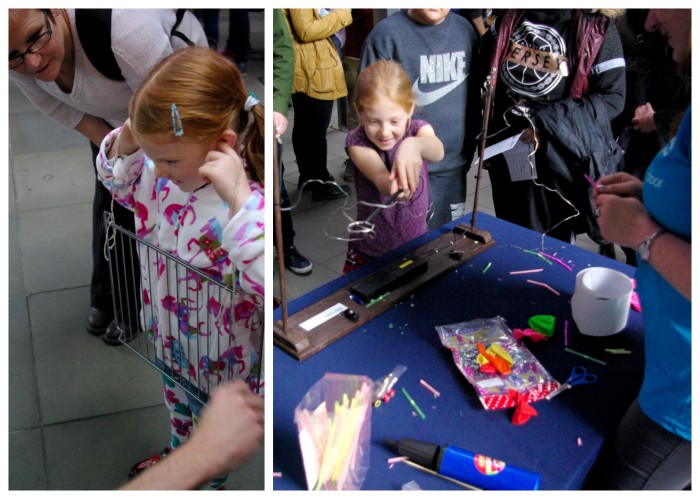 There is so much to see at the museum that we didn’t really know what to do, so we just kind of wandered and see what caught our interest. On the ground floor of the Great Western Warehouse is a gallery dedicated to textiles. Being in Manchester, there is a lot of exhibits about the cotton mills which are fascinating. There are regular talks here so you can learn about what it would be like to have worked in the cotton mills in the past. We had a play with some interactive equipment where we learnt about the properties of different materials. Some of this equipment was a bit battered and it being half-term, there was sometimes a bun fight for whose turn it was next, but overall, we really enjoyed the textiles gallery. My 11-year old was fascinated by the jacket made from thistledown. 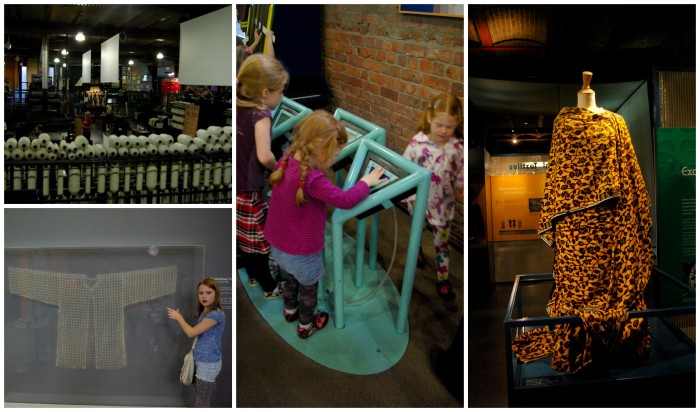 Experiment! is the hands on gallery which is designed to teach children all about science. You can play with magnetism, and lights, and ride a bike to get yourself x-rayed (top secret – it’s not a real x-ray!). The girls loved this bit. Again it was busy due to it being half-term, and some of the things didn’t work, but another winner. 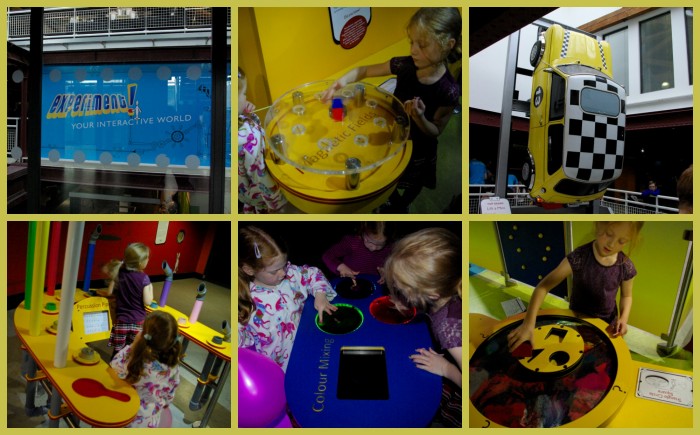 After the excitement (and noise) of Experiment! we went to the nearby restaurant to have lunch. It wasn’t the cheapest restaurant I’ve ever been in but reasonable and the food was freshly cooked. The pizzas looked awesome. The girls had a pick n mix sandwich lunch box which was priced on a par with similar attractions.

The museum is spread over several buildings which were part of an old rail depot. After lunch we decided to have an explore and see what was housed in some of the other buildings.

The Making of Manchester is an exhibition of local history and the people and industries that made Manchester what it is today. There’s quite a few rooms of this. As we’re not from Manchester it’s not as interesting to us as it is to local people, and there’s a lot to read rather than interact with which isn’t as much fun to the smaller people in our group. We did find a few things to look at, such as these mock-ups of how people used to live, and some chains in the crime and punishment section.

Underground Manchester in the basement of the station building and the 1830 warehouse. It’s an exhibition of what goes on underground – mainly sewerage and drainage and water supply. The girls thought the displays of old toilets were hilarious, the toilet theme being right up their street. This was a really good exhibition which told you a lot about the business of water supply and waste. 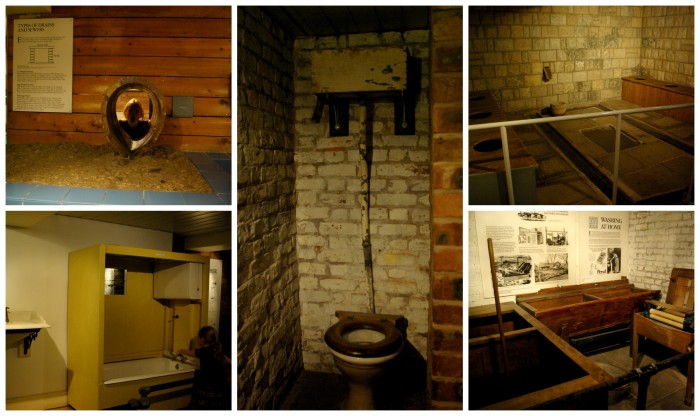 Wasted: The Trouble with Rubbish was brilliant for children because it explained about waste and recycling via the medium of ‘stuff to poke’. There were machines to play on which showed the business of waste management. My 11 year old was particularly taken by an interactive game which explained waste planning policy and made her understand just how difficult it can be to please everyone when it comes to local decision making. The twins liked the stuff that lit up and made noises when you pushed the buttons or span the spinny thing.

We had a quick walk through the Power Hall which contained large-scale industrial machinery and engines. It was fascinating but we didn’t stay here very long. My little girls don’t really appreciate steam engines as much as they should. Ah well, they will learn. Here there was a team from the local university conducting research into local dialect and language, in both adults and children. We helped them out by sticking the word ‘breadcake’ with a pin on the map in East Yorkshire. Apparently other people from elsewhere in the UK call them ‘baps’ or even ‘barms’. Strange.

Our last stop was over the road to the Air and Space Hall, which is an exhibition of all kinds of transport including bi-planes, motorcycles, and old cars. Again, the girls weren’t overly interested in these but they gave it a good go anyway. 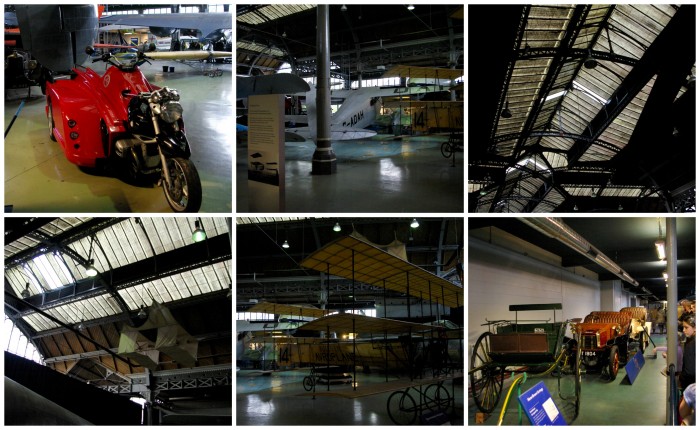 Total visit time – four hours. You could easily spend all day here looking at everything, especially when they have extra temporary exhibitions.

Parking is available nearby in paid car parks. Expect to pay around £5 for all day parking.

Accessiblity is good though the old buildings could occasionally make prams and wheelchairs hard work. Lifts are available most places.

Watch our Museum of Science and Industry video on YouTube